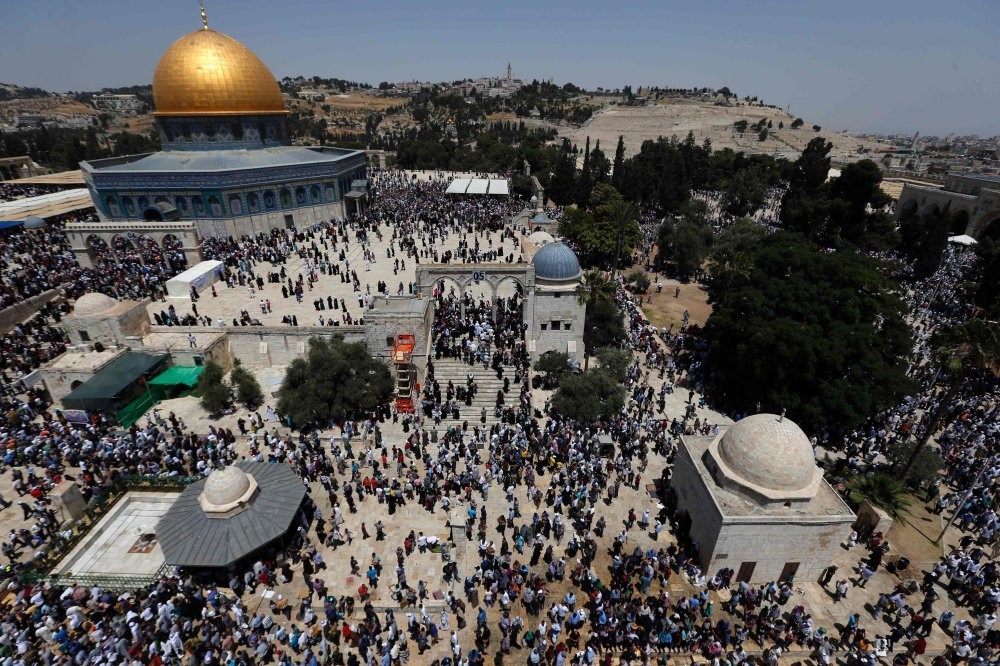 The Al-Aqsa mosque compound in Jerusalem is a popular destination for Turkish tourists.
by Compiled from Wire Services
Jul 26, 2018 12:00 am

Jerusalem, home to sacred Muslim sites, is very interesting for Turkish visitors, especially after the controversial U.S. decision to relocate its embassy to the city. Showing solidarity against Israeli occupation of east Jerusalem where sacred Muslim sites Al-Aqsa and the Haram al-Sharif are located, Muslims, particularly Turkish citizens, flock to the city, tour agencies report.

Israel's informal policy of deportation, visa rejection, arbitrary detention and keeping Turkish nationals waiting for no reason at airports, failed to discourage hundreds. Muhammet Demirci, head of Mirasımız (Our Heritage), a non-profit working to preserve Ottoman-era sites in Jerusalem, said Israel "is disturbed" by overwhelming interest in Jerusalem by Turkish visitors. "They keep people waiting at the airports and target guides for Turkish tourist groups in particular," he told Anadolu Agency (AA).

In June, Israel arrested 27-year-old Ebru Özkan, one of 38 Turkish tourists visiting Jerusalem. She had concluded visiting Jerusalem as as part of a package tour and was about to fly home on June 11 when Israel police detained her at Tel Aviv's Ben Gurion Airport. She was the latest person to be taken into custody by Israel, which deems anyone sympathizing with Palestinians a threat and randomly detains Muslim tourists, particularly from Turkey, visiting Jerusalem. She was released and returned to Turkey earlier this month. Her arrest raised a public outcry in Turkey where Israel is already at the heart of public anger over its treatment of Palestinians. It also brought Israel's intimidation of Muslims back to the spotlight. She was arrested on charges of helping "terrorists," a blanket term used by Israel to describe groups opposing Israel's blockade of Palestinian territories, by bringing five bottles of perfume from Turkey to Israel and handing them to an unidentified Palestinian. She was also charged for giving a cellphone charger to another person. She was not the first Turkish national to be detained by Israel. Since last year, Israeli police briefly detained at least four others on different occasions.   Although Israel detains people from other nationalities as well, Turkish citizens make up most of the headlines, as Ankara is the most outspoken critic of Tel Aviv for its policies against Palestinians.

Ahmet Şeker, head of Burak Tour, which sells package tours, told AA that they were overwhelmed with the high demand, especially with an increase in the number of flights to Israel from Turkey. He complained that Israel has a strict visa regime that requires application at least 20 days before a visit, adding that applications were only answered one day before scheduled travel. He says their tour guides face the most problems. "We had to send a group of customers without a guide when he was denied a visa recently. This is a big problem. We can hire local guides there, but it is important to have a Turkish guide," he said.

"We used to arrange two or three tours at most per year in the past, but in the last six months alone, we booked nine tours. Other agencies sell even more tours. It is safe to say that there is a 300 percent rise in tours sold for Jerusalem," he says.

Numan Balcı, owner of Kıble Tourism, said the demand increased particularly after President Recep Tayyip Erdoğan's recent call for more Turks to visit Jerusalem. Like other travel agencies, he says the biggest challenge for them is the visa application. "(Israel) denies visas to many in the groups, and it is deliberate. For instance, they issue visas to parents but not their three-months-old baby. This means that they don't want us to visit Jerusalem," he told AA. Mehmet Zahit Kara, a university student who will make his second trip to Jerusalem, said securing a visa was difficult and 10 in his group of 14 tourists were denied visas. "We hear that Israelis also threaten Palestinian families in Jerusalem that help Turkish tourists," he added.