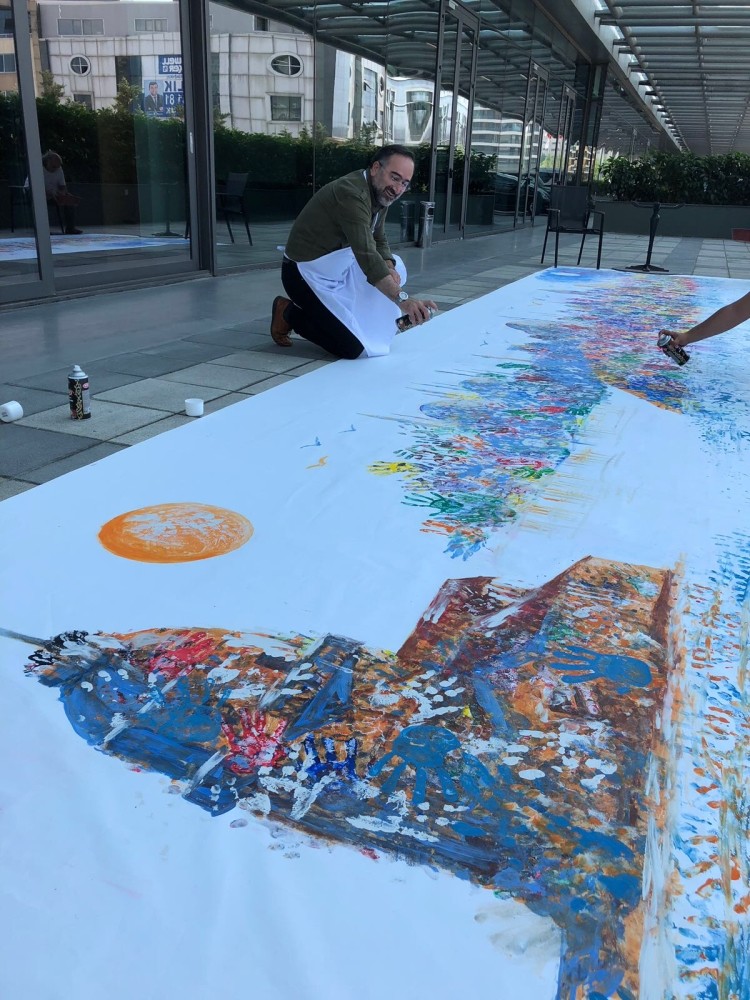 Students used their handprints to color a giant painting of the Istanbul skyline.
by Daily Sabah Aug 09, 2018 12:00 am

Some 1,000 university students from 118 countries, who attend a summer program organized by Turkey's state-run Yunus Emre Institute, are in Istanbul for an art event.

"Hand to Hand in Turkey for a Beautiful World" involves a painting of Istanbul's landmarks. Collaborating with Turkish artist Şafak Tavkul, students used their hands to paint a 10-meter wide painting depicting the city's skyline and landmarks such as the Maiden's Tower. The painting will be exhibited at Cemal Reşit Rey Hall today.

The summer school gives an opportunity for students to learn more about the Turkish culture and language. Students attend workshops and visit several cities during the program. Students from 118 countries, including Indonesia, Algeria, the United States, Armenia, Israel, Cuba, Germany, the United Kingdom, Denmark, Palestine, Egypt, Estonia, Finland, France and the Netherlands, were selected from 150,000 applicants for the program that started in July.

The institute, named for the famous Turkish poet who lived from 1238 to 1320, has taught Turkish to thousands of people and reached out to more with Turkish cultural activities abroad since it was founded in 2009. A flagship organization promoting Turkish culture and language abroad, the institute has 54 offices in 42 countries.

Yesterday, a group of students attending the program visited Daily Sabah where they were introduced to the newsroom and discussed Turkey's cultural relations with other countries.