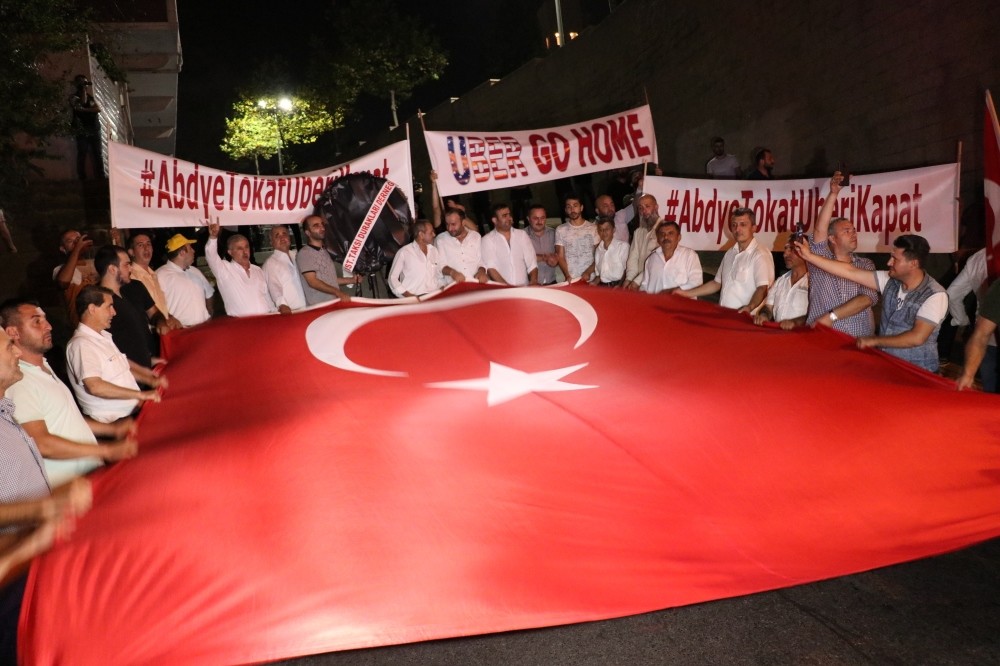 Taxi drivers condemn the American government's attacks on the Turkish economy and their principal competition Uber.
by Daily Sabah Aug 17, 2018 12:00 am

Taking advantage of the widespread anger toward the U.S. government, Istanbul's taxi drivers staged a demonstration against the speculative attacks on the Turkish currency and Uber

A group of taxi drivers in Istanbul staged a protest in front of the U.S. consulate late Wednesday, condemning what they called speculative attacks on the Turkish lira, the actions of the U.S. government and their perennial enemy, the popular ride-sharing app Uber.

The taxi drivers first gathered on the Asian side of the city, hanging Turkish flags on their vehicles and blasting their horns. They then drove over the July 15 Martyrs Bridge over the Bosporus before going to the U.S. Consulate in Sarıyer.

They were carrying placards that said "Uber go home" and "Slap the U.S., shut down Uber."

With the police taking extra security precautions around the building, the drivers first sang the national anthem and then Istanbul Taxi Stops Association Chairman Resul Sivri read a statement. He said there were many alternative ways to wage war in this day and age, and the U.S. was clearly waging an economic war against Turkey.

"We have no doubt that Turkey will emerge victoriously from this war. We, as taxi drivers, stand behind our government and promise to do our utmost to fight against thieving American companies."

He said the real target of the U.S. wasn't Turkey but President Recep Tayyip Erdoğan and they, as taxi drivers, had no intention of allowing any attack against the president.

After the statement, the drivers left a black wreath at the door of the compound.

Uber's operations in Turkey have sparked growing controversy, with taxi drivers protesting against what they say is unfair competition and illegal business practices by the ridesharing service. Uber drivers in Istanbul were hit with TL 18.92 million ($4.2 million) in fines by Turkish police in the first five months of this year. Anyone riding in an Uber vehicle was also fined but later compensated by the company.

Taxi associations in the city filed a lawsuit against the popular app, calling to block access to the app and seeking damages to their business. An Istanbul court in June ruled for expert witness reports to be prepared for the case and adjourned the hearing to Nov. 7.

The 17,400 official yellow taxis in Istanbul are a pillar of the city's often patchy transport system, but critics say that poor quality service and overcharging have given Uber an opportunity to carve a niche in the market.

In June, Erdoğan said Turkey will join several other European countries that have banned the ride-hailing service, saying "the Uber controversy is over."

"We have a taxi system," he said, adding that they would not allow Uber to destroy the business of Turkish taxi drivers.

Since then there have been efforts to improve the services provided by taxis.