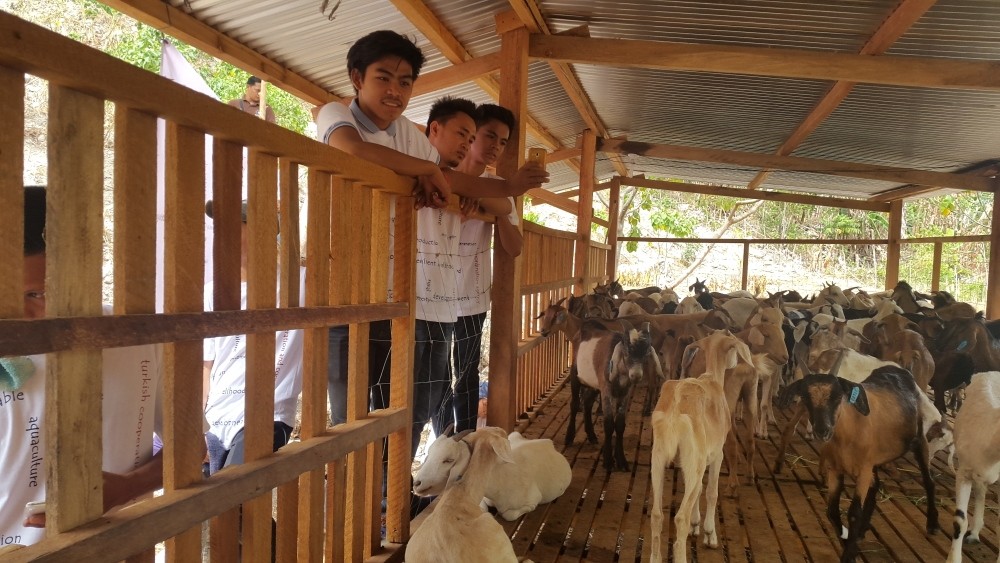 Locals at a pen for goats provided by Tu0130KA in Mindanao. The agency also aims to boost agricultural income in the island.
by Daily Sabah with AA Sep 04, 2018 12:00 am

Turkey's leading state-run development agency TİKA has launched a project designed to help Filipino Muslims in Mindanao, a region that has suffered from violence and poverty, by teaching them to generate income through cage fish farming, and goat and poultry breeding

Bangsamoro, the Filipino Muslim community concentrated in the Mindanao region, was granted wider autonomy recently after years of conflict with the Philippines military, but poverty and disasters have taken their toll on locals. Turkey's state-run Turkish Cooperation and Coordination Agency (TİKA) oversees aid projects across the globe and has reached out to the community with a string of income-generating projects.

In the province of Cotabato, the agency provided 150 goats to families, and they successfully increased the number to 500 through breeding. Baktır says they aim to create income for 10,000 people in the project. Goat breeding is a less-preferred sector for Filipinos living in rural areas, and TİKA aims to boost it as a new way to earn income for poor families.

Cage fish farms, meanwhile, provide relief for families who depend on fishing in a country composed of more than 7,000 small islands.

The projects are not without their challenges though. The poultry farm set up by TİKA after a 2015 agreement with Filipino officials on aid projects was severely damaged by Typhoon Vinta last December. The agency also distributes fruit and vegetable seedlings and seeds to families, but prevalent typhoons in the region often obstruct agricultural aid efforts. Located on an area of 117,000 square kilometers, Mindanao Island covers more than one-third of the Philippines' archipelago and is home to the Bangsamoro, a community composed of 13 indigenous tribes. An armed struggle began in the 1970s for autonomy of the region that left thousands dead, but the conflict reached a peaceful end when Philippine President Rodrigo Duterte signed the Muslim self-rule in the region into law this summer. This step means wider autonomy for the Bangsamoro, including more political and fiscal powers, and is expected to pave the way for rapid development in the region after decades.

With its broad and fruitful farm lands, business opportunities, rich variety of marine products, virgin forests, and various fruits and vegetables, Mindanao Island was described as "the island of words" in the early 1950s. However, today, it has turned into an island monopolized for short-term profits. Its natural resources, agricultural areas for cultivation, underground sources and large forests were opened to exploitation, leaving many people deprived. While most of the island community earns a living by producing rice, corn, tapioca and bananas, roughly 40 percent of island's inhabitants are busy raising and breeding livestock.

Apart from development aid projects, TİKA will also build five schools and three clinics in Mindanao. Previously, a little-known state apparatus founded to help former Soviet republics after the collapse of the Soviet Union, TİKA has rebranded itself in the past decade as a major source for Turkey's international clout by reaching out to people in need across the globe.