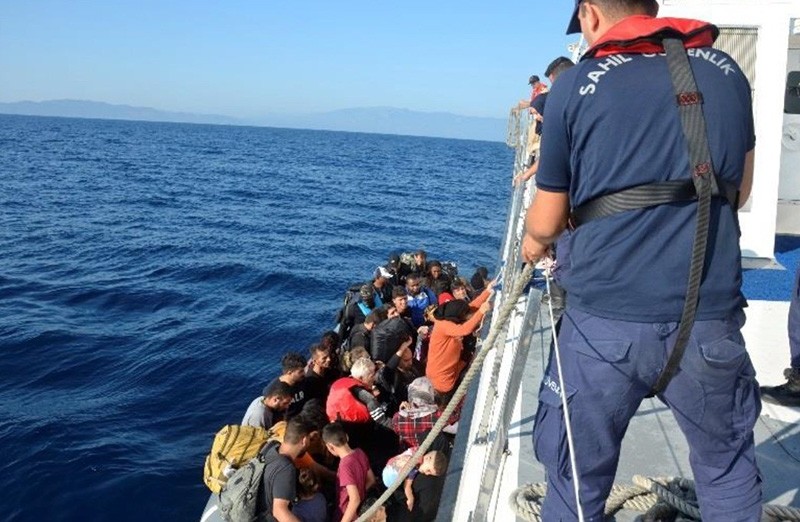 Turkish coast guard teams on Monday rescued 16 irregular migrants and recovered the bodies of two female migrants after the boat carrying them capsized off coastal Bodrum in the southwestern Muğla province.

In a statement, the Turkish Coast Guard Command said two teams were sent to the area after voices were heard from the sea.

The irregular migrants, including 15 Iraqi nationals and a Syrian, were trying to cross to the Greek island of Kos, the statement said.

It added that search and rescue efforts were ongoing for one missing migrant.

In Başkale in the eastern Van province, 72 migrants, including children, were held by local gendarmerie forces, the sources said on condition of anonymity due to restrictions on talking to the media.

The migrants were nationals of Afghanistan and Pakistan, they added.

In the southern Hatay province, patrol units along the Syrian border caught 24 Syrians.

All of the migrants were referred to provincial migration offices.

Turkey is a transit destination for many migrants aspiring to pursue better lives in Europe. Turkey hosts some 3.5 million Syrians -- more than any other country in the world.

Despite the rising far-right rhetoric to restrict arrivals of migrants in Europe, many of them head to Turkey's borders with Greece and Bulgaria almost every day to reach Europe, particularly Germany.

In March 2016, the EU and Turkey reached an agreement to stop irregular migration through the Aegean Sea, and improve the conditions of more than 3 million Syrian refugees in Turkey.