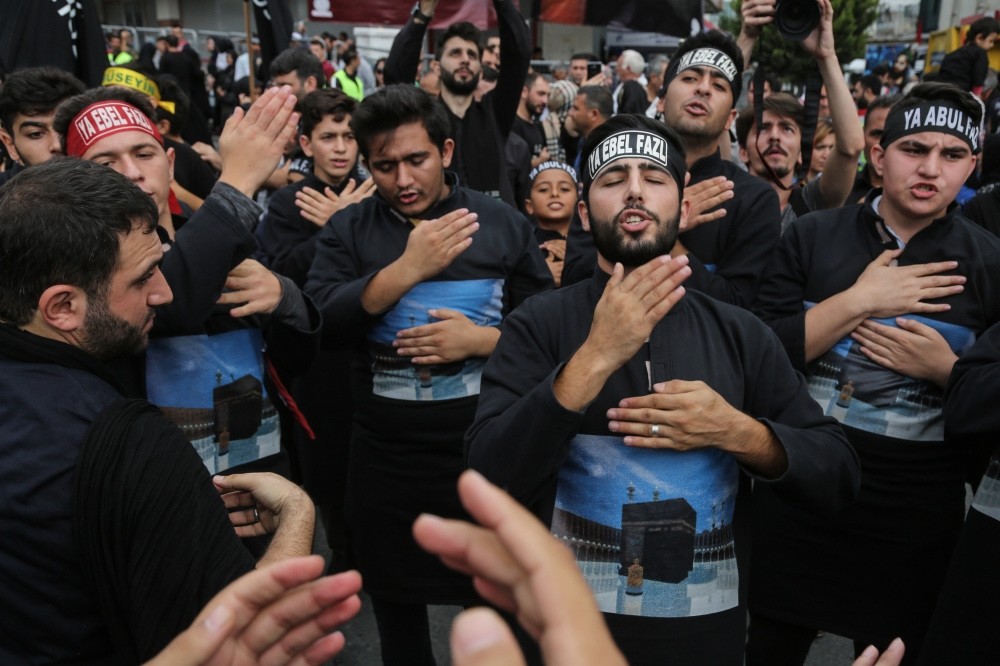 The Jafari community in Istanbul marked the day with a parade where they beat their chests in mourning.
by Daily Sabah Sep 21, 2018 12:00 am

Ashura, a religious day that bridges Shiite and Sunni Islam, was marked yesterday across Turkey, mourning Prophet Muhammad's grandson, a revered figure for Shiites, and by serving of ashura, a dessert made specifically for the holiday

Shiite and Sunni Muslims yesterday marked ashura, a religious day observed on the 10th day of the first Islamic month Muharram with traditional rituals. Turkey's Jafari community of Shiite Muslims held a parade and commemoration event in Istanbul's Halkalı district to mark the suffering of Imam Hussein, grandson of Prophet Muhammad (Peace Be Upon Him) and a revered figure in Shia Islam. Sunni Muslims also marked the day with remembrance of Hussein, and they also observed it by serving ashura, a dessert that is also known as Noah's pudding, which is made to remember Prophet Noah's surviving the Flood.

Dressed in black and wearing red headbands with messages commemorating Hussein, Jafaris marched on the streets of Halkalı to mark the 1,379th anniversary of their "mourning." The killing of Hussein in a battle with Caliph Yazid is one of the most tragic incidents in Islamic history as it led to a rift between the believers. Today, Hussein is remembered as a figure praised for his stand against tyranny and injustice for his fight against Yazid's army, which outnumbered his small army of companions. 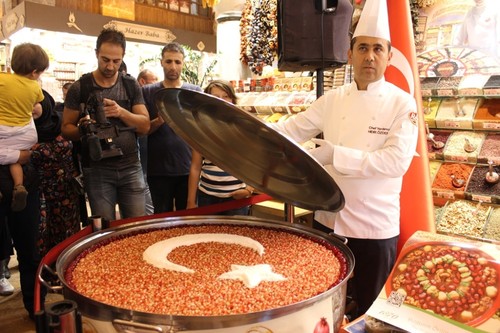 The city also hosted distributions of ashura dessert in the Spice Bazaar and other locations.

The Jafari community beat their chests as a symbol of mourning though they shied away from more bloody rituals that were common in past commemoration events, like self-flagellation and shedding blood. Now, blood drives are held every year instead of those rituals. Community members later came together at a cultural center where plays symbolizing the death of Hussein were performed and community leaders addressed the faithful.

Elsewhere, non-profit organizations and municipalities marked the day by distributing the ashura dessert to thousands of people on the occasion. A mixture of morsels of grain and dried fruits in a sweet pudding garnished with pomegranate, ashura is traditionally made at home and shared with neighbors in Turkey. It is also the custom to prepare it in large cauldrons to distribute to the poor.

In Istanbul's iconic Spice Bazaar where every ingredient of the dessert is on sale in dozens of shops, the municipality of the city's Fatih district served ashura to visitors. Topped with crescent and star shapes made from the dessert's ingredients, the dessert was served to 13,000 people, leading to long queues in the popular marketplace.

In Sümbül Efendi Dervish Lodge, members of a foundation dressed as dervishes, prepared ashura in large cauldrons to mark a tradition dating back to the Muslim conquest of Istanbul. The lodge is home to the graves of Fatma and Sakine, two daughters of Hussein who died in Constantinople under Byzantine rule centuries ago. Fatih Çıtlak, prominent author and a board member of the foundation, said Ashura Day, was originally marked to remember the salvation of prophets from troubles - Noah's surviving the Flood and Moses' liberation from Egyptian tyrants - became a sad occasion after Prophet Muhammad's death. "It was the day Hussein was martyred, and it is an important occasion today to show we have no divide [as Muslims], and we can sacrifice our lives in the fight against oppression," he told Anadolu Agency (AA). Çıtlak said the lodge was the first place where ashura dessert would be distributed in Istanbul during the Ottoman rule. "It was a long-held tradition but forgotten in time. We revived it, and I personally come here to help prepare ashura for the past 30 years," he said.