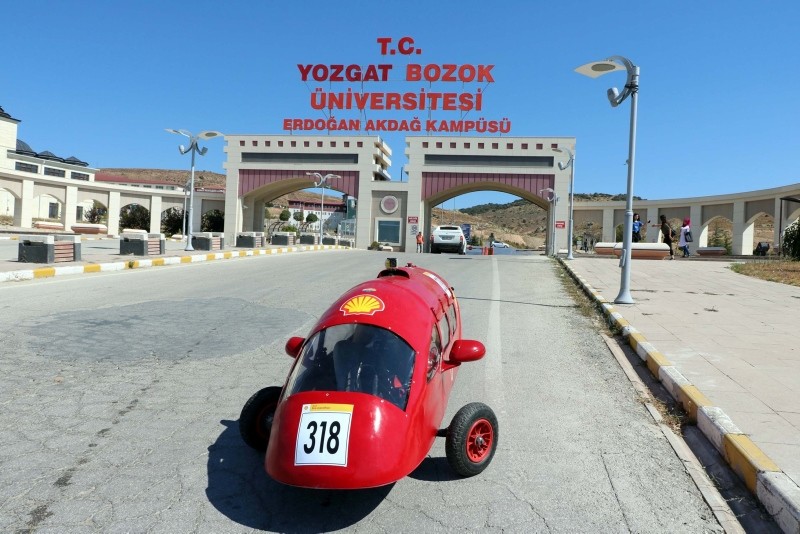 A prototype for an electric car that can travel around 170 kilometers on one kilowatt-hour of energy — which costs a measly one Turkish lira — produced entirely by a group of students from Turkey's Yozgat Bozok University will be evaluated at a competition in London next year.

Sertaç Somuncu, a member of the university's "3M-Electro" club and one of the students that participated in the production of the car, stated that the vehicle and the engine, were locally-made, except for the main battery. He also added that the prototype vehicle consumes 1 kilowatt of energy to go a distance of 160-170 kilometers.

"With adequate support, we can transform it to sell on the market. It is not suitable for traffic right now since it is just a prototype. We need support to convert it for daily usage," said Somuncu.

The vehicle was ranked 5th among 20 other candidates at Shell Eco-marathon Turkey.

The annual competition, hosted by the Shell Turkey and Turkish Exporters Assembly (TIM), is a battle among Turkish teams for energy-efficiency.

Stating that the performance of the vehicle and its weight — 131 kilograms— made the car stand out from its competitors, Somuncu said he was going to attend the international competition in London next year.

Mustafa Yaz, the head of the Electrical and Electronics Engineering Department at the Faculty of Architecture and Engineering, specified that the designs of the engine, engine transmission, built-in charging device and battery administration system belonged to them.

"We will be very pleased if companies in Turkey shows support so a vehicle that is considerably cheap and practical can be produced. We gained the right to go to Europe. We are proud of our students who contributed to the production of the vehicle. We are also thankful for the support of businessman Bilal Şahin," added Yaz.