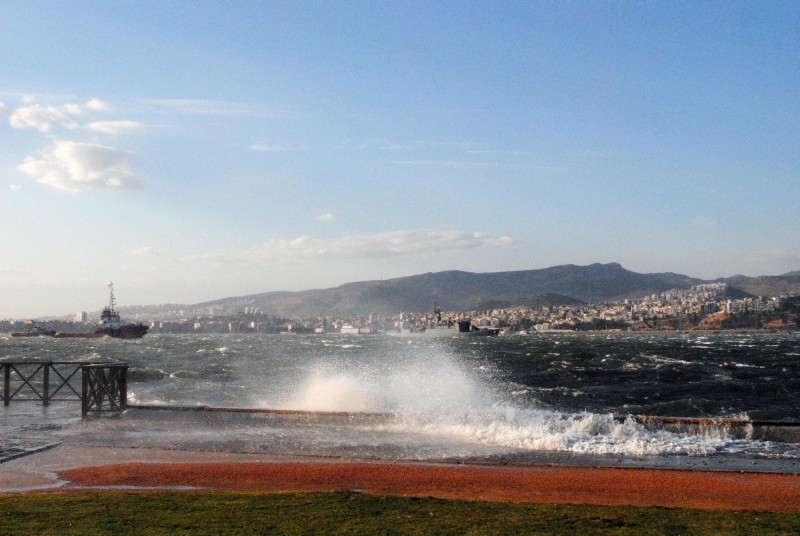 Meteorologists are warning of a high probability of a tropical-like cyclone forming in the Ionian Sea to the southwest of mainland Greece, sounding alarm bells in the country as well neighboring Turkey as gale-force winds continue to batter the region, disrupting ferries and forcing schools closures.

The storm named Xenofon in Greece sent temperatures dropping from nearly 30 C (86 F) on Monday to 18 C (64 F) on Wednesday, while the first snowfall was reported in mountainous areas.

Meteorologists have warned of the formation of a Mediterranean cyclone, known as a medicane, which combines the words Mediterranean and hurricane, in the Ionian Friday.

The Turkish State Meteorological Service (TSMS) also issued a storm warning on Thursday, saying the storm forming in the central Mediterranean is expected to intensify and move eastwards over the weekend.

The statement said the cyclone's path and strength are not still clear, however, if it approaches Turkey's western Aegean region in line with the projections, it could bring winds up to 100-120 kph and heavy rainfall of 75 kilograms per square meters, which could lead to destructive flash floods. The western provinces of Izmir, Aydın, Manisa, Balıkesir and Çanakkale will be affected by the cyclone, it added.

Associate Professor Murat Gündüz from Dokuz Eylül University in Izmir told Demirören News Agency (DHA) that the winds of the cyclone could reach up to 180 kph, but it is likely that it would hit the land on the southern Greek mainland and the Aegean island of Crete first, before approaching the Turkish coast with winds of 80 kph. Turkey's third largest city Izmir and the southern city of Antalya are large urban centers that could be affected from the storm, Gündüz said, adding that it could cause power cuts, communication disruptions and rises in the sea level.

"These strong storms are very rare in the Mediterranean. Storms of this scale were only witnessed 10 or 20 times in the past centuries. Therefore it is important, it needs to be monitored. There is not yet an official institution that monitors hurricane forecasts in European countries that have a coastline on the Mediterranean Sea. It is expected that the [Mediterranean] hurricanes will be more frequent and strong in the future due to climate change. That's why hurricane forecast centers are needed," Gündüz said.

Ferries remained in port in Piraeus on Thursday due to strong winds, some exceeding 100 kph (62 mph), and severing Greek islands' connection to the mainland.

Trees have fallen on power lines in the northern suburbs of the Greek capital Athens, while the fire department said it received more than 350 calls to remove debris.

Authorities in the Saronic municipality near Athens, on the Ionian island of Zakynthos and the Aegean islands of Tinos, Andros and Mykonos ordered schools to remain shut.

Late Wednesday, the fire service said a wildfire spurred by strong winds on the Ionian island of Cephalonia was threatening the village of Zola, but it wasn't immediately clear whether its residents would have to be evacuated.

The fire service said 16 firefighters with eight fire trucks were battling the blaze.

The gales also halted efforts to ease overcrowding at a much-criticized migrant camp on the island of Lesbos after ferry services to the mainland were canceled. Greek authorities were planning to relocate 2,000 migrants from Moria Camp, which is occupied by some 10,000 refugees despite its 3,000 capacity.

A separate storm in the northern Aegean has been disrupting ferry services to the Turkish island of Gökçeada for the last three days. All ferries were canceled to the island on Wednesday and Thursday, and more disruptions are expected.

The provincial directorate of the TSMS in western Izmir said that the storm will be effective on Thursday on Friday with winds up to 50-60 kph on land and 80-90 kph on sea, urging citizens to take necessary precautions.