Brazilian mechanics all the rage in Turkish city hit by hailstorms 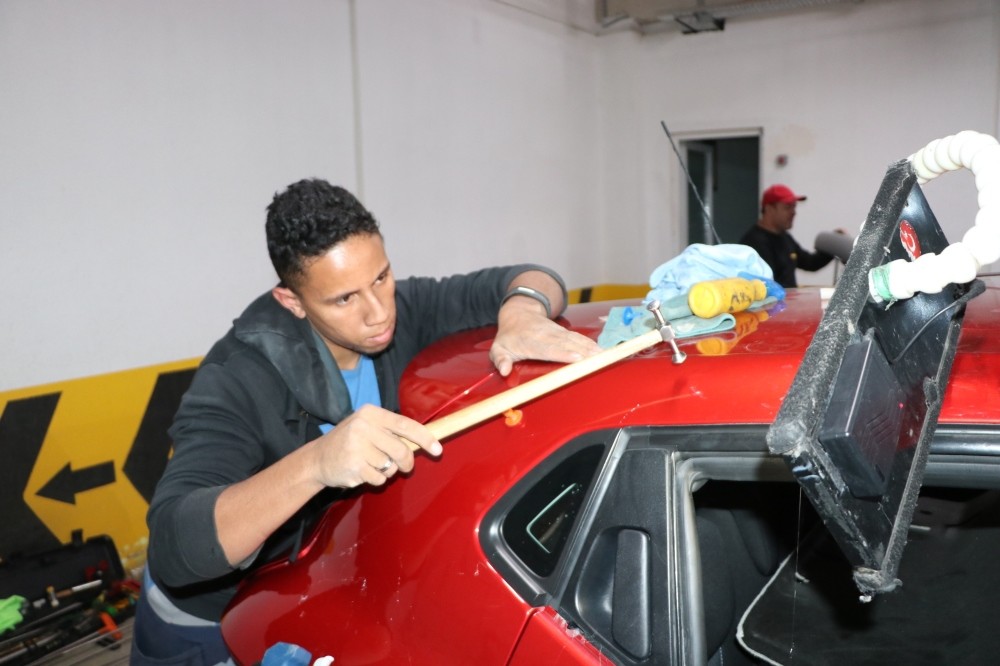 Brazilian mechanics are popular among motorists for their technique that does not require repainting for repairing dented hoods.
by daily sabah
Oct 02, 2018 12:00 am

Kastamonu, a small northern Turkish province affected by unprecedented hailstorms last month, is turning to an unlikely place for help: Brazil. A team of 10 Brazilian mechanics is offering services to motorists whose vehicles were heavily damaged in hailstorms. Part of a larger team of Turkish mechanics, the Brazilians were picked because of their country's pioneering work in dent repairs without using paint.

About 10,000 vehicles in Kastamonu were damaged by hail stones the size of walnuts and mechanics in the province of about 370,000 people were overwhelmed with work. Local garages sought help from other cities.

Douglas Sabastiao Nunes Da Silva joined one team of mechanics who arrived in Kastamonu recently. Da Silva prides in being from a country where a unique dent repair technique originated from. Using lights and glue sticks, Da Silva restores the car's body to its original state without applying paint. "We have many professionals in this field back in Brazil. Restoration of a car to its former state takes between four to six days, depending on the size of the hailstone that hit it," he explained to Anadolu Agency. Da Silva works with Erkan Küçükkurt, a Turkish mechanic who came from Istanbul to work in Kastamonu after the hailstorm. "Cars are heavily damaged. We have some 200 vehicles awaiting repair here but there are thousands of others out there and we believe half of them were damaged beyond repair," Küçükkurt said.

He says his garage brought in mechanics from Brazil as they were understaffed. Still, they can only work on four cars a day.

Fatih Durna, another Turkish mechanic working with Brazilian colleagues, says Brazil is leading in the sector because it provides training for mechanics at universities. He said that there were more than 200 Brazilians currently working in Kastamonu apart from their garage's crew.