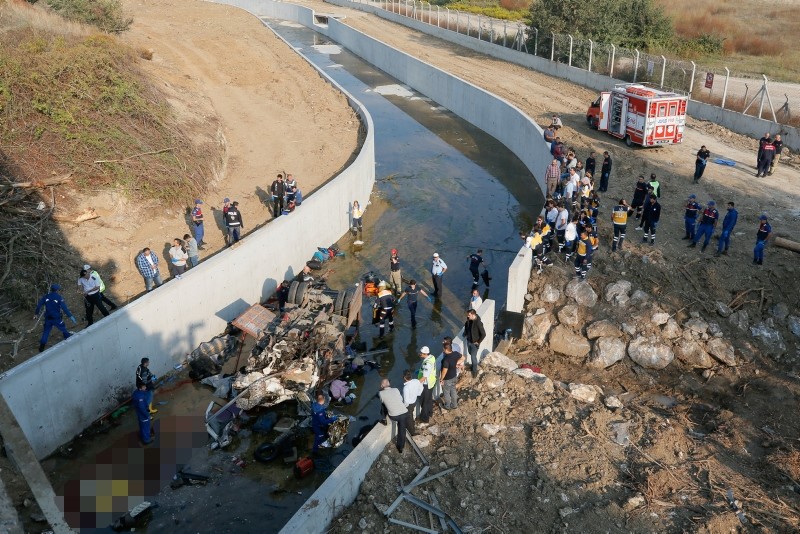 At least 22 people, including children, died on Sunday after a vehicle carrying migrants plunged off the highway into a waterway in western Turkey.

The vehicle, described as a truck, was traveling on a highway in the Izmir region close to Adnan Menderes airport when it flipped over and fell into the channel several meters below.

The nationality of the migrants was not made clear. Twenty-two people were killed, raising an earlier toll of 15, while 13 more were injured.

Photos of the scene showed the stricken wreckage of the vehicle reduced to burned-out metal by the impact of the crash.

Demirören News Agency (DHA) said the driver of the vehicle, a Turkish man aged 35, survived and told police from his hospital bed that he had swerved to avoid an oncoming white vehicle.

The dead included two babies and two children as well as a pregnant woman, the agency said.

Once the driver's hospital treatment is completed, he will be sent to court with a demand to be arrested as regional prosecutors have opened an investigation.

One witness, Mehmet Eker, told AA that he had taken the injured driver to hospital. "It was first light. Someone by the side of the road tried to stop me. I was cautious. I stopped the car a bit ahead. He walked towards me and said, 'I had an accident, and I'm injured.' He called a few people from my phone, but no one answered."

Eker said the driver later wanted to get off at a taxi stop. "Later, someone he called, called me back. I told him who I was and who was trying to call them. The person on the phone said he didn't know anyone by that name or who fit that description. He asked me where I was. I said İzmir. I asked him, and he said Mersin [on the southern Mediterranean coast]."

DHA said that the vehicle was headed for the coast of the Izmir region, from where the migrants planned to take inflatable dinghies, which had been packed into their vehicle, to Greece's Samos island.

Samos is just a few kilometers north of Turkey's Dilek peninsula that juts out from the Izmir region.

A million migrants crossed from Turkey into Greece in 2015, mostly by boats, in a crisis which forced a deal between Ankara and the EU to stem the flow of people.

Numbers have fallen since but people are still undertaking what is a highly perilous journey and the flow has ticked up this year from 2017.

According to U.N. figures, more than 24,500 migrants have arrived in Greece by sea so far this year, with 118 people losing their lives via this route.

Last week, eight migrants were found drowned off the Karaburun district, also in Izmir province, after their boat capsized.

Twenty-six others are still officially listed as missing after that accident.

After the disaster off Karaburun, four suspected smugglers were arrested following evidence given by an Iraqi who survived.