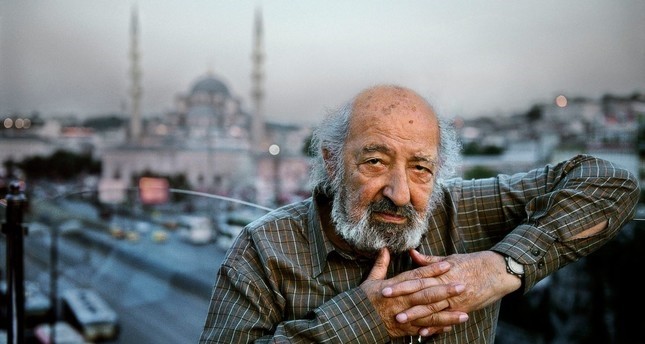 Legendary Turkish photographer Ara Güler, nicknamed the "Eye of Istanbul," passed away at the age of 90 late Wednesday. Despite being revived shortly after his heart stopped, the artist eventually lost the battle for his life at the intensive care unit, sending his fans to sorrow.

Güler suffered a heart attack and was taken to the intensive care unit of Florence Hospital where he breathed his last.

He was suffering from kidney failure and had to be taken for treatment thrice a week.

"That dialysis makes me stupefied," he said in an interview with Anadolu Agency in 2015.

"I cannot do anything three days a week, it takes four hours each time and it is unbearable."

In the world of photojournalism, Güler has been known as the "Eye of Istanbul", not only because it was where he studied filmography, theater and economics before finally turning to journalism, but because he managed to capture daily life in only city in the world located on two continents. He rose to fame with his black-and-white portraits of the city.

The importance of the journalistic work of the Armenian-Turkish photographer lies in his ability to turn the day-to-day environment and common subjects into extraordinary moments and characters.

Güler's legacy represents the main visual record in Turkey from the 1950's through the 1970's, particularly in Istanbul.

Güler spent his days in the coffee shops of the city, talking to the everyday people -- getting to know their stories and using his lens to capture the essence of each subject.

Güler's career as a photojournalist began in 1950 at the daily Yeni Istanbul before joining the Hürriyet. In 1958, he was named the correspondent in Turkey for Time-Life magazine where his work was recognized and led to hires by other international magazines including Stern, Paris March and the Sunday Times from London.

In 1961, he became the head of the photography department of the Arab magazine, Hayat. That same year he was recruited for the Magnum Agency, one of the world's most important photography agencies.

Güler had a unique definition for photography that he said does not necessarily have to be art, but needs to depict any historical fact. "With a photo, you capture history, you stop it with a machine," he once said.

Güler was the most well-known Turkish photographer and the first Turk to become a member of the American Society of Magazine Photographers.