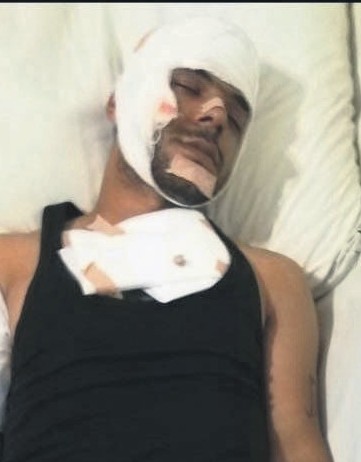 A fugitive's attempt to deceive the authorities into believing that he had died through messages on social media failed after his father showed up and foiled the plan. Ahmet Bedircan, 23, was found guilty of theft, assault and drug trafficking by a court in the Mediterranean province of Adana and sentenced to serve eight years and seven months in prison.

After serving some time in prison, he was transferred to a low-security facility, from which he escaped. When he learned that the police was after him, he devised a plan to make them think that he had died. Photographs of him with a bandaged head, arm and torso appeared on various social media platforms, with his friends posting condolence messages.

They also posted an address, with the notice that Demircan was already buried. However, when his father Cesim Bedircan, from the northwestern Aegean town of Balkıkesir, saw the messages he was devastated. He flew to Adana on the first available flight. When his son's neighbors told him his son had not died, he immediately went to the nearest police station, filing a missing person's application. It didn't take long for the police to find the very much alive Ahmet Demircan, who was carrying a fake ID. After being identified through his fingerprints, he was sent back to prison.