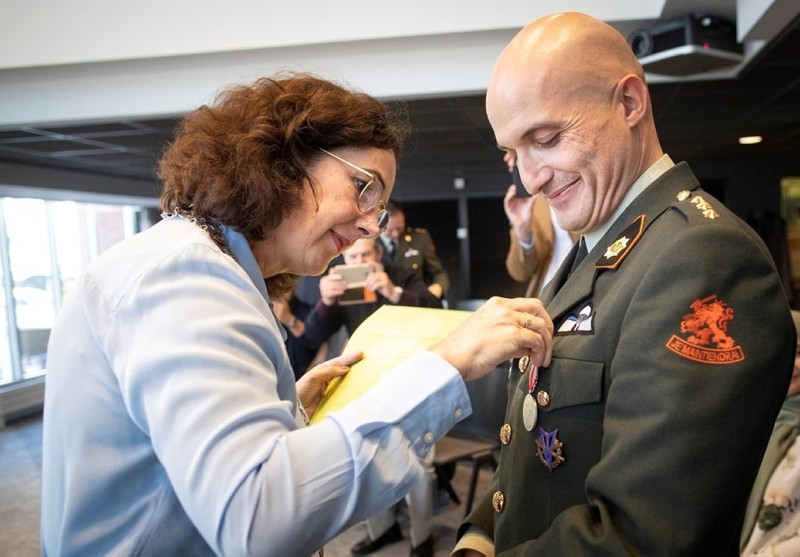 Amsterdam Mayor Femke Halsema decorates Dutch officer Ekrem Karadeniz with a medal provided by the Carnegie Heroes Foundation for his bravery in a fire in Amsterdam, Oct. 19, 2018. (AA Photo)
by Anadolu Agency Oct 21, 2018 12:00 am

A Turkish-origin officer serving the Netherlands army has been awarded a medal for saving his Dutch neighbors in a fire in Amsterdam last March.

Ekrem Karadeniz, 44, a captain in the Dutch army told Anadolu Agency on Sunday that he feels honored.

The silver medal was handed over by the mayor of Amsterdam, Femke Halsema.

Karadeniz said that he came home early on the day of the fire.

"I saw dark smoke from my window. I understood that they weren't ordinary fumes. When I looked outside the window, I heard my neighbor's screams from downstairs. I went to the bathroom and covered my head after wetting it with a big towel. I asked my wife to call emergency while running downstairs," Karadeniz said.

He said he found his neighbor half unconscious on the floor and took him outside.

"Then I took my neighbor's spouse outside as well," he said, adding that he checked if anyone else was trapped in the fire.

He managed to exit the building safely.

Karadeniz gave first aid to his neighbors until an ambulance arrived in the scene.

"I only fulfilled my responsibility," he told his neighbors, who thanked Karadeniz for his bravery. 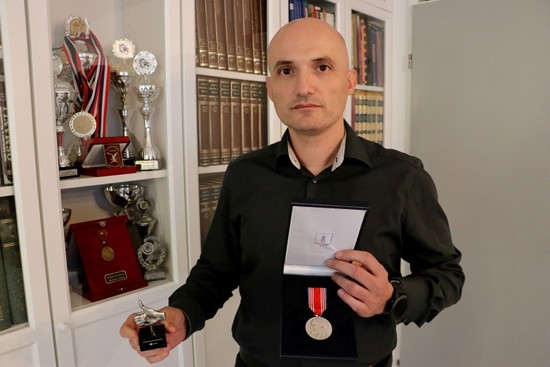 Two days after the fire, Amsterdam police congratulated him over his heroic behavior and awarded him.

Serving the Dutch Armed Forces for many years, Karadeniz said that this was not his first medal as he was given six others.

Karadeniz added that his ancestors were war veterans for Turkey as his grandfather and great-grandfather took part in the Korean War and the Battle of Gallipoli during WWI.

Turkish forces served under the UN Command during the Korean War between 1950 and 1953, and 774 Turkish soldiers were killed.

The Battle of Gallipoli started in February 1915, when Britain and France decided to launch the Dardanelles campaign, in order to knock the Ottoman Empire out of the war as quickly as possible by reaching and capturing its capital Istanbul.