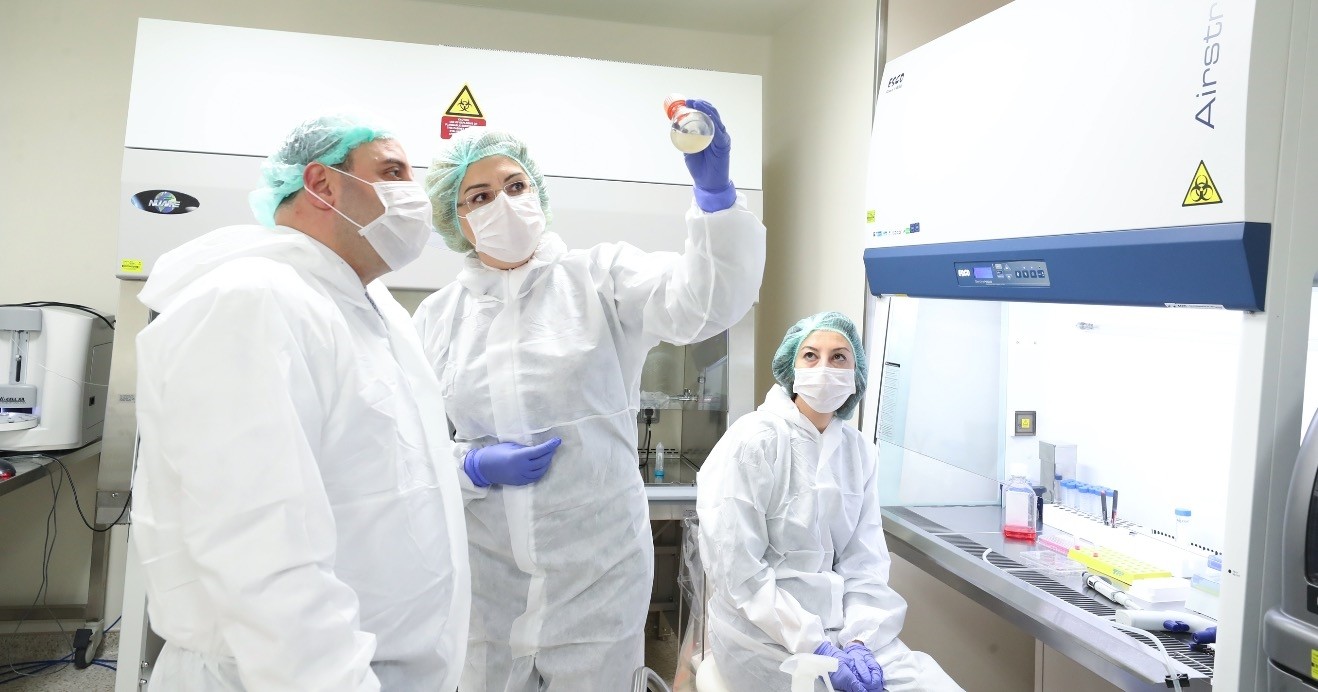 Minister of Industry and Technology Mustafa Varank (L) visited the lab that produces the biotechnological drug.
by Daily Sabah Nov 19, 2018 12:00 am

Turkey pursues what authorities call a "domestic and national initiative" to reduce its dependence on imports and to promote local projects more in everything from the defense industry to the automotive sector.

A new biotechnological drug, which will be used in treatment of head and neck cancers, is the latest in efforts to encourage locally-made drugs for Turkish pharmaceutical companies.

BİOSİM's project for development of drug will be wrapped up soon and the drug is expected to go on a trial phase before its ultimate introduction to the market next year.

Industry and Technology Minister Mustafa Varank visited the lab in Gebze, a northwestern town which is one of the leading industry and technology hubs of Turkey, where the drug is being developed. The project is being carried out at the Marmara Research Center of the state-run Turkish Scientific and Technological Research Council (TÜBİTAK).

Varank told reporters that it was an important technology devised by Turkish researchers and they had the capacity to produce 180 different biosimilar or biotechnological drugs.

"The infrastructure we have here will allow us to manufacture drugs we used to buy from abroad," he said. Varank said BİOSİM will be delivered to a company in May 2019 for mass production and will be on sale after that date if it passes preclinical and clinical trials. The drug is also the latest example of public-private partnership that helped Turkey launch what the government called "megaprojects" in recent years and contributed to construction and operation of "city hospitals," sprawling hospital campuses opened in the last two years to serve large populations.

Professor Şaban Tekin, who heads TÜBİTAK's Institute of Biotechnology, says BİOSİM focused on developing cells starting from genes and developing cells that produces antibody. Tekin said that the original form of the biosimilar drug is on sale for $1 million per kilogram.

"This is a high value-added product and shows Turkey is now capable of developing such products on its own," he said.

Turkey resorts to pharmaceutical drugs mostly for cancer treatment though biotech drugs started replacing them in recent years. Development of biotech drugs needs molecular biology and genetic engineering methods that in turn necessitates use of high technology, something Turkey has long lacked.

Recombinant antibodies are among most popular and effective drugs in cancer treatment and biotech drugs based on them only target cancer cells, stopping their development through the body. Turkey imports all biotech drugs it uses.

Biotech drugs make up 20 percent of the Turkish drug market. Figures from August shows biotech drug market in Turkey has a volume of about TL 5 billion ($940 million) and majority of these drugs are originals while biosimilar drugs make up TL 247 million of the biotech market.

No price is set yet for BİOSİM but it is expected to be far cheaper than the original drug it is based on. Turkey also plans to export it in the near future.

Turkey's New Economy Program (NEP) recently unveiled by the government focuses more on the country's biotechnological pharmaceutical industry in order to lower the current account deficit in the short term and eventually turn it into a health technology base.

Under the program, the government will provide infrastructure support and direct incentive to produce 20 different drugs locally. By doing so, it wants to reverse the trend of importing drugs that has seen Turkey spend $3.4 billion in the last three years and begin exporting.

The country wants to eventually claim a larger share of the $140 billion global biotech market.

In addition, legislation will be facilitated by other institutions in the commercialization phase of products researched and developed using public funds.

Further regulations will facilitate the licensing of domestic production, pricing and reimbursement system. In order to meet the sector's need for the workforce, graduate and doctoral students will be awarded grants and scholarships.

Realizing the development in the sector, local and international companies are producing biotech drugs in Turkey. Major local players, including Abdi Ibrahim and Koçak Farma, have increasingly invested in biotechnological drugs.

The top five firms in the sector have so far invested $600 million in this field. In addition, U.S. biotech giant Amgen has invested $35 million in a new biotechnological facility in Istanbul after it acquired Mustafa Nevzat for $700 million.