Greece's Thessaloniki a haven for FETÖ members after coup attempt 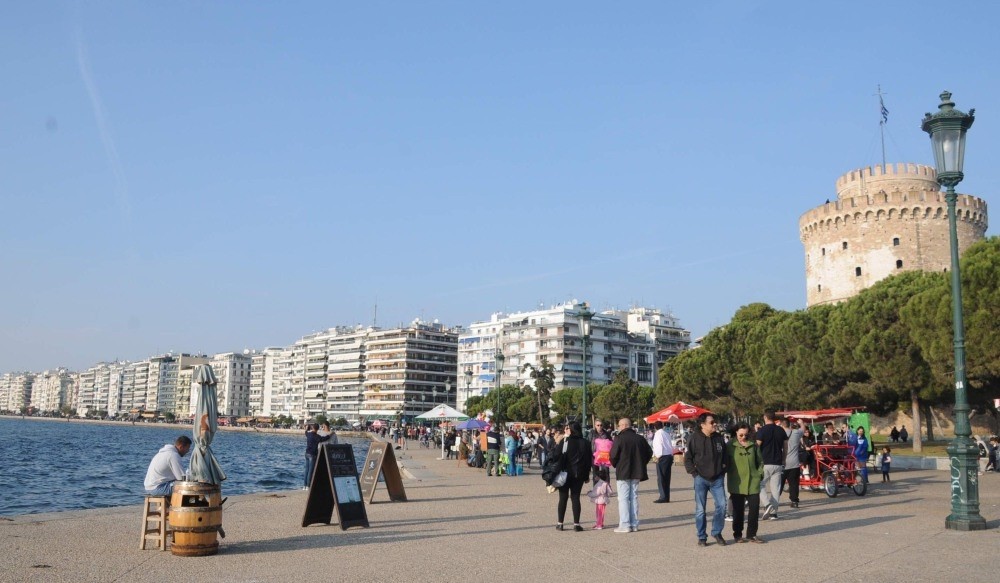 A view of Thessaloniki. Greece's second-largest city has been popular among FETu00d6 members in the past two years.
by Daily Sabah with DHA Nov 22, 2018 12:00 am

The Greek city of Thessaloniki rapidly evolved into a hub for members of FETÖ, the terrorist group behind the 2016 coup attempt in Turkey. It is currently home to at least 1,000 members of the group

Thessaloniki, Greece's second-largest city, has seen a steady flow of fugitives from Turkey in the past two years. All share a common affiliation: sympathizing with Gülenist Terror Group (FETÖ). Members of the group who fled the country after FETÖ's coup attempt on July 15, 2016 in Turkey was thwarted took shelter in the city after that date and their number currently stands near 1,000. Gülenists were also buyers of 50 residences out of 250 bought by Turkish nationals in the past two years in the city.

Greece, which maintains somewhat tainted ties with Turkey due to past hostilities and current tensions over sovereignty issues in the Aegean Sea dividing the two countries, turned into a haven for Gülenists after eight putschists went there. Putschist soldiers who were involved in the coup attempt in Istanbul hijacked a military helicopter and landed in Greece's Alexandropolis, seeking asylum. They were tried by a court in Athens and subsequently released, to the chagrin of Ankara. One among them was granted asylum while the others await the ultimate decision of Greek authorities in a safe house under police protection.

Encouraged by the Greek court's decision that defied multiple extradition requests for putschist soldiers, FETÖ members started trickling into Greece. Thessaloniki, where about 7,000 Turks live, was their favorite destination as it is the big city nearest to Turkey, only 450 kilometers west of the Turkish border. Low housing prices also helped fugitive FETÖ members who chose to purchase residences there instead of renting. Some await processing of their asylum requests and due to Greek laws for asylum seekers, their expenditures are covered by the state. Some FETÖ members try to cross into a third country.

All of them avoid contact with other Turks in the city. A Turkish resident of Thessaloniki who requested to remain anonymous for the news report, said the number of FETÖ members in the city has considerably risen in recent months. "As Turks here, we know each other well and can recognize if a new person arrives from Turkey. They don't talk to us and usually come together separately from other Turks," he said.

Turkish border patrols have stopped 250 FETÖ members in the past two years as they tried to cross into Greece via the Meriç (Evros) river that divides the land border of the two countries. Security measures are already tight across the border which is also the scene of attempts by illegal migrants from other countries who try to reach Europe. Among the 250 FETÖ members caught on the border are three judges who helped FETÖ to imprison its critics in sham trials and a prosecutor who is accused of using forged evidence to imprison military officers in another sham trial. Yesterday, police in Edirne, the Turkish province bordering with Greece, detained four FETÖ members who were hiding in a house and planning to sneak into Greece. Three human smugglers helping them were also detained. One of the four suspects was a correspondent for Zaman, the now-defunct newspaper which long served as a Gülenist mouthpiece in the Turkish media.

Due to its location at the gateway of Europe, Greece has been a popular destination both for migrants and fleeing FETÖ suspects after Turkey escalated a crackdown on the terrorist group in the wake of the coup attempt.

Turkey has repeatedly accused Greece of being a haven for terrorists who committed crimes against Turks. Athens has recently angered Ankara over a string of decisions for asylum and the release of terror suspects wanted by Turkey. Most recently, it released two suspects involved in the 2016 coup attempt. Halit Çetin and Fatih Arık, members of an elite underwater offense commando unit of the Turkish Army, who fled to Greece in 2017 after Turkey issued arrest warrants for the duo for their involvement in the coup attempt. In line with legal procedures, Çetin and Arık were taken into custody and held in a refugee camp for 18 months, a formal period for detention. They were later relocated to a secret place instead of being extradited to Turkey. Apart from FETÖ, Greece has been criticized for harboring members of far-left terrorist groups. Earlier this year, Greek courts ordered the release of members of the Revolutionary People's Liberation Party-Front (DHKP-C), which is recognized as a terrorist group by the European Union. The DHKP-C, who are the perpetrators of a series of crimes in Turkey including the killing of a prosecutor and the bombing of the U.S. Embassy, long enjoyed protection in Greece where its members wanted by Turkey stayed in Lavrion refugee camp, claiming persecution in Turkey.