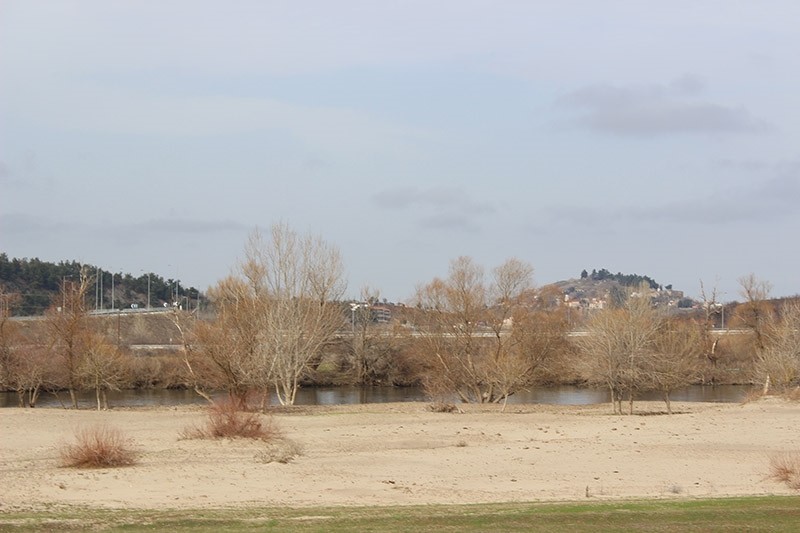 Photo shows the location where one of the migrants' body was found in Edirne, Turkey (AA Photo)
by Daily Sabah with AA Dec 04, 2018 12:00 am

The bodies of three illegal migrants, apparently frozen to death, were found in three separate spots near the Turkey-Greece border yesterday. Media reports and an eyewitness say they were victims of 'pushback,' the illegal practice of sending migrants forcibly back to Turkey by Greece.

Three bodies found in three villages in Edirne, a northwestern Turkish province bordering Greece, sparked allegations that Greece is involved in "pushback," an illegal practice of forcing illegal migrants to countries they are not citizens of but arrive from.

They were apparently frozen to death, although autopsies are still pending. The unidentified male victims did not have trousers and shoes.

The body of the first migrant was found in Edirne's Serem village when a shepherd in the rural area alerted the authorities. The victim is believed to be of Afghan origin.

Gendarmerie troops patrolling the area near the border discovered two more bodies in Akçadam and Adasarhanlı villages. Initial investigation shows the two men froze to death a few days ago.

Afghan Jamaluddin Malangi, 29, told reporters that he knew one of the victims. He said he saw one of the three migrants found dead at a police station where they were held together after sneaking into Greece.

Malangi, held by gendarmerie forces on the border with Greece, told how they got to Greece by crossing the Meric River but later were sent back to Turkey by Greek soldiers.

"We moved towards a village near the forest (in Greece). We asked for help by knocking on doors of Greek villagers," he said.

"During that time, the Greek police came and caught us. First they took us to the police station and then to the riverbanks. They made us get on the boat and sent us back" to Turkey, he related.

After fleeing hardship in Afghanistan, Malangi called the mistreatment they faced "saddening."

Greek soldiers have no mercy, he said, but praised Turkish soldiers' "merciful" attitude.

"Pushback" is an illegal practice under international conventions, and Greece has never acknowledged whether its security forces were involved in pushing back the migrants or not. Turkish media outlets say Greece pushed back some 4,000 illegal immigrants last year.

Based on the accounts of the illegally deported migrants, Greek police officers are also accused of confiscating migrants' valuable possessions and torturing them.

Every year, hundreds of thousands of migrants flee from civil conflict or economic hardship in their home countries in hope of reaching Europe. Edirne is a prime migrant route.

Turkish security forces apprehended more than 59,675 irregular migrants in Edirne province on the border with Greece and Bulgaria in the first 10 months of 2018. The number is expected to exceed 70,000 by year-end.

Greek authorities say over 14,000 "irregular entries" have been recorded across the Turkish border so far this year, a high number compared to 5,500 in 2017.

The data by Turkey's Directorate General of Migration Management revealed that most of the migrants come from Pakistan, Syria, Iraq and Afghanistan. The numbers increase in late summer and autumn before dropping in the winter months, according to the data.

Temperatures fluctuate to minus zero degrees in Edirne and other provinces at the border which also saw heavy rainfall last week. Migrants usually take boats onto the Meriç river while some try to swim across to the other side.

Demirören News Agency reported yesterday that Turkish border guards discovered 713 illegal migrants "pushed back" by Greece in the past five days, most were Afghan or Syrian nationals, who were accommodated at a center run by the migration authority.

The last reported "pushback" case was 15 days ago at Edirne's Uzunköprü district. Fourteen migrants from Yemen, Palestine, Algeria and Morocco were found half-naked in a border village whose residents helped them.

The migrants told reporters that Greek police officers "wearing masks" beat them and sent them back after ordering them to strip down and confiscating their cell phones and other possessions.

In December 2017, a young Pakistani immigrant died of hypothermia when he fell off the boat he was forced to take with others in what fellow migrants claimed was another instance of "pushback" by the Greek police.

Turkey and the European Union signed a deal in 2016 to curb illegal immigration through the dangerous Aegean Sea route from Turkey to Greece. Under the deal, Greece sends migrants held on the Aegean islands they crossed over to from nearby Turkish shores and in return, EU countries receive a number of Syrian migrants legally.

The deal, reinforced with an escalated crackdown on human smugglers and more patrols in the Aegean, significantly decreased the number of illegal crossings.

However, some desperate migrants still take the better-policed land border between Turkey and Greece, especially in the winter months when a safe journey through the Aegean is nearly impossible aboard dinghies.

Greece, which struggles to cope with the huge influx of migrants, especially after a civil war in Syria displaced millions, has already been criticized for decrepit conditions in refugee camps on its Aegean islands.