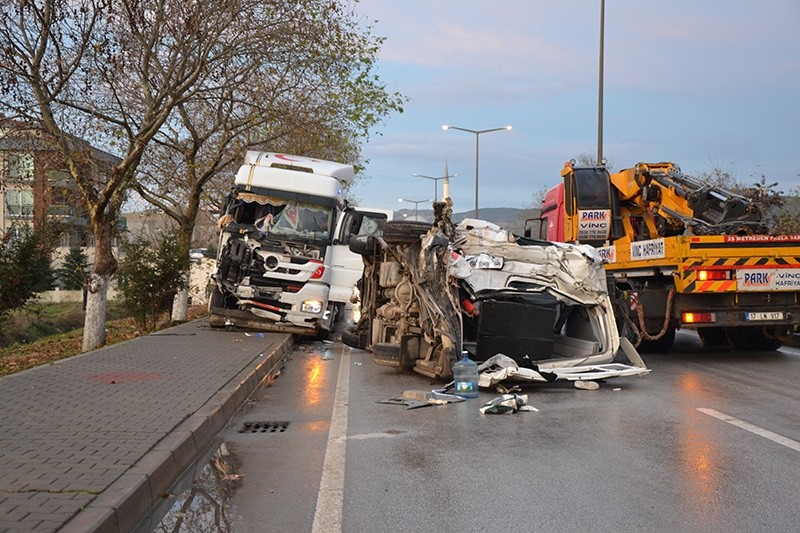 Photo shows accident between a semi-truck and a minibus carrying workers in Biga district of northwestern u00c7anakkale province on Monday, Dec. 10, 2018. (AA Photo)
by Daily Sabah Dec 10, 2018 12:00 am

A total of five people were killed and 16 injured in two separate traffic accidents in northwestern and southwestern Turkey on Monday.

In the northwestern province of Çanakkale, a minibus carrying workers to a factory collided with a semi-truck, killing four people and injuring 16 others.

The workers were on their way to a factory in the Gönen district of Balıkesir province when the accident occurred in Çanakkale's Biga district.

Police, emergency medical teams and firefighters rushed to the scene and took the injured passengers to nearby hospitals.

Meanwhile, on a highway between Turkey's southwestern Denizli and Aydın provinces, a 25-year-old driver died after being trapped under his own car when it hit barriers and flipped.

Ali Şen was pronounced dead at the scene. Şen, who was not wearing a seatbelt, was ejected through his windshield and killed as the car rolled on top of him.

Authorities determined that Şen lost control of the car on his way to Denizli, after maneuvering to avoid colliding with a bus that suddenly appeared in front of him amid thick fog.

Şen's body was taken to the state hospital morgue in Sarayköy district.

Police launched an investigation into the accident.