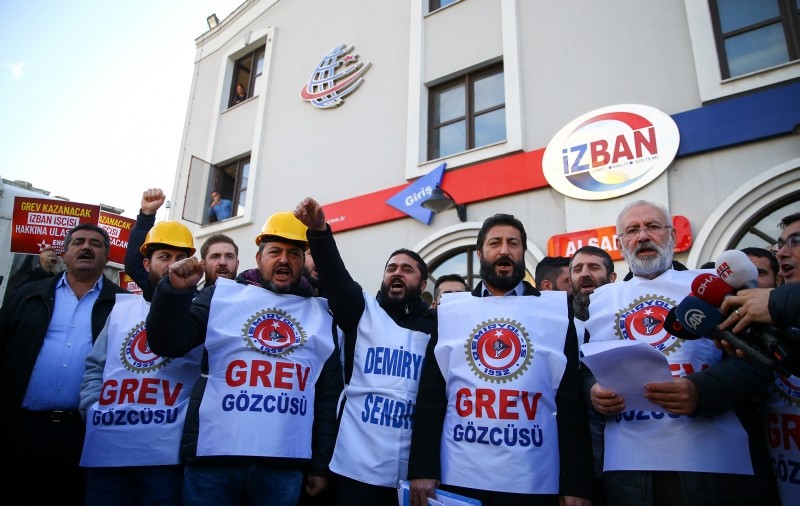 Services were partially halted Monday in the commuter rail system of Turkey's third largest city of Izmir as collective bargaining talks between the trade union representing the railway workers and the operating company IZBAN failed.

Following the last departures on Sunday, workers shut down several stations and put up banners. Services were halted between Aliağa-Çiğli and Airport-Selçuk stations, making up the northernmost and southernmost sections of the 136-kilometer (85-mile)-long system. The frequency of services between Airport and Çiğli stations, making up the busiest section of the line, was also decreased.

Some 342 workers, mostly train engineers and technical staff, are taking part in the strike.

Officials from IZBAN, a joint subsidiary of the Izmir Metropolitan Municipality (IBB) and the Turkish State Railways (TCDD), said that trains made up of five cars are currently running every 24 minutes between 6:30 a.m. and 11 a.m., and 4 p.m. and 10 p.m., using non-union personnel. However, this service is far from adequate, especially during rush hours.

The IBB increased the number of bus services and facilitated extra transportation between stations using articulated buses. However, traffic throughout Izmir increased as a result, with jams extending longer than usual in the early hours of Monday.

IZBAN had reportedly offered a 22 percent raise in collective bargaining talks but this was refused by the Demiryol-İş trade union.

The trade union's Izmir branch Chairman Hüseyin Ervüz said they were forced to do the strike due to IZBAN's pay policies. Ervüz accused the IZBAN of strike-breaking through using subcontractors, saying this is not feasible as they only offer 24 services against 269 pre-strike services.

Kocaoğlu, who has led the CHP's stronghold since 2004, announced early October that he won't seek another term in the elections.

The CHP-led municipality previously faced a short bus strike in August 2017, which came at a time when ferry services were halted for more than 20 days, again over pay issues.

While the IBB faces voter pressure and negative press over the strikes, it has defended itself by stating that strikes often took place in Izmir as trade unions are active among its employees, unlike other municipalities in Turkey. The IBB was also one of the earliest municipalities in Turkey that reduced the use of subcontractors to a minimum, an issue prioritized by President Recep Tayyip Erdoğan in late 2017.

IZBAN carries approximately 300,000 passengers on the line that serves 40 stations and connects the Selçuk and Aliağa districts. The system, currently considered the most successful suburban railway renewal project in Turkey, will reach 185 kilometers (115 miles) when the line is extended to Izmir's northernmost Bergama district.

However, passengers often complain that the system covering most of Izmir districts on the north-south axis is inadequate, especially during rush hours, as the IBB's transfer policy is deficient.

The IBB also came under fire in early 2018 for changing its fare policy for IZBAN, which requires passengers to pay the full fare (approximately between TL 7 ($1.30) and TL 12 ($2.30) depending on the station) when they arrive at stations and later be refunded at their exit stations. The policy was criticized especially by left-wing groups on the grounds of blocking people's money on municipality accounts.