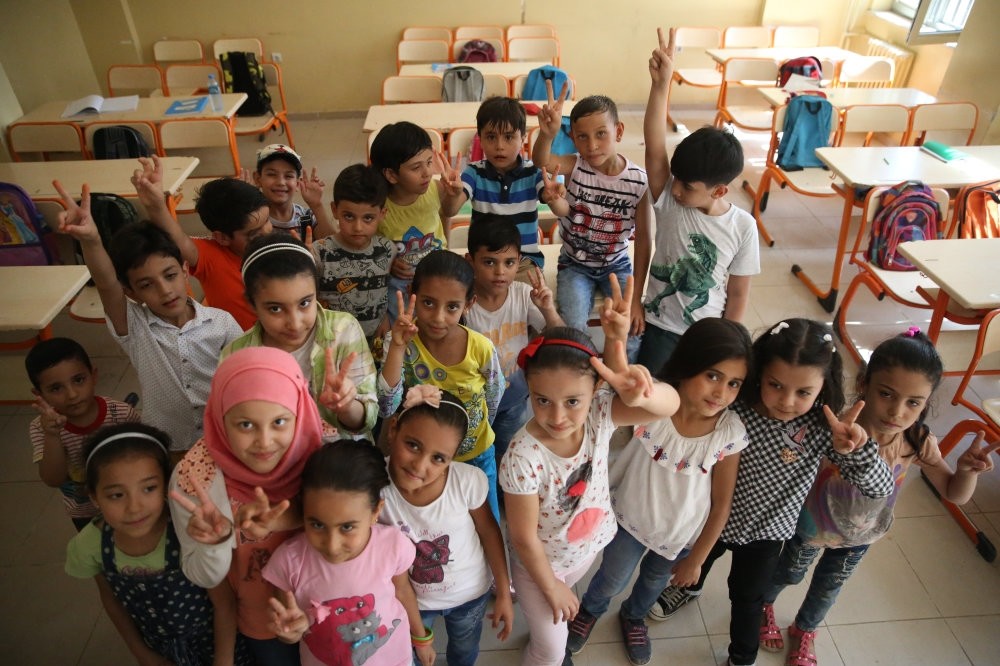 Syrian refugee children at a school in the southeastern city of u015eanlu0131urfa. Turkey offers access to education, health and other public services for more than 3.5 million refugees from Syria.
by Compiled from Wire Services Dec 12, 2018 12:00 am

The UNHCR and its nonprofit partners are seeking $5.5 billion for a two-year plan to help countries, including Turkey, that are hosting Syrian refugees; they also announced that around 1 million refugee babies were born in displacement

With no end in sight to seven years of conflict in war-torn Syria, the United Nations is looking to support countries hosting refugees more financially. The United Nations Refugee Agency (UNHCR) and its nonprofit partners announced yesterday what they called a 2019-2020 Regional Refugee and Resilience Plan to that extent. Under the plan, donors are asked for $5.5 billion to support the efforts of Turkey, Lebanon, Jordan, Egypt and Iraq to deal with the continued impact of the Syrian crisis.

A statement by the UNHCR yesterday said neighboring countries remained "incredibly generous in hosting large refugee populations, offering asylum and protection, making their public services available to refugees and enabling more and more refugees to participate in the local economy despite the toll it has taken on their own development trajectory."

Still, the crisis remains as dire as ever and the UNHCR announced that there are some 5.6 million Syrian refugees currently registered in neighboring countries, with around 1 million newly born in displacement.

Since 2011, Turkey has received a constant flow of displaced Syrians fleeing the conflict and their numbers have expanded from mere thousands to more than 3.5 million, the largest among refugee-hosting countries. So far, Turkey has spent more than $30.2 billion on their well-being.

The conflict in Syria has killed hundreds of thousands of people and forced more to flee, while more than 7 million are internally displaced. Refugees mainly took shelter in Turkey, Jordan and Lebanon. Some have sought to reach Europe via the Aegean and Mediterranean seas, but hundreds died en route to Greece and other littoral countries.

The UNHCR statement says up to 250,000 refugees could return to their homeland next year and many others face problems with documentation and property.

"Now, by and large, the war has ended. We have a few pockets [of hostilities], including Idlib, as you know that there is a negotiated cease-fire and a de-escalation zone. As the situation in Syria improves, some of these refugees are making the journey home," Amin Awad, UNHCR director for the Middle East and North Africa, said at a news conference in Geneva yesterday. "We are forecasting, in what we call phase one, up to 250,000 Syrians going back in 2019. That figure can go up and down according to the pace with which we are working and removing these obstacles to return. "Their living conditions have deteriorated as their existence in exile prolongs. They have been borrowing money, they are indebted and a lot of them are living below the poverty line, 70 to 80 percent of them are living below the poverty line in their host communities or countries," Awad said on the state of refugees. "We are asking donors to stay the course," he added. Ankara has often criticized the international community for not providing sufficient humanitarian aid for the refugees in Turkey and not taking in more refugees.

Turkey also looks to ensure the safe and voluntary return of refugees to parts of Syria liberated from terrorist groups. So far, more than 281,000 people have returned home after Turkey launched its first cross-border operation in 2016 to back the Free Syrian Army (FSA) ans liberate northern Syrian towns from the control of the terrorist group Daesh.