Turkey's new locally made cancer drug counts down to launch 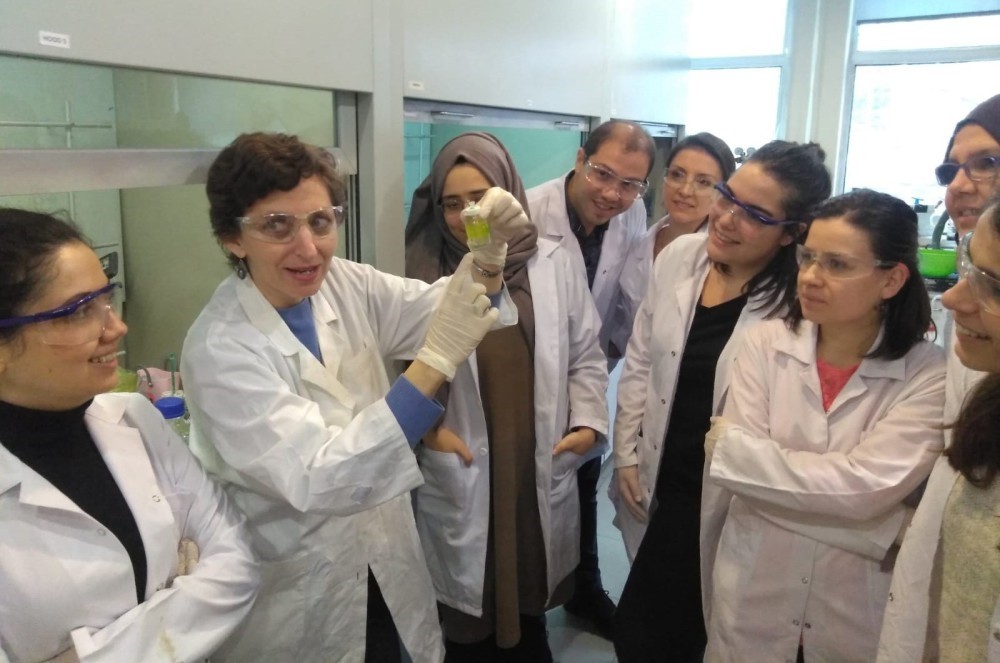 Professor Rana Nomak Sanyal (second left) with her team of scientists in the lab where they developed the drug.
by Daily Sabah with IHA Dec 13, 2018 12:00 am

Tucked away in a corner of sprawling campus of Boğaziçi University in an upscale Istanbul neighborhood, a group of young women - and a few men - in lab coats work on a drug which could be revolutionary for Turkey. They are the assistants of professor Rana Nomak Sanyal, a chemistry expert who returned to Turkey more than a decade ago after a stint in the United States' chemical industry. Sanyal is a popular name nowadays in Turkish scientific community as she looks to develop a locally made cancer drug, a relatively significant development for a country which has long been dependent on other countries in drugs and medical equipment.

Clinical trials are expected to begin for the yet unnamed drug and it will mark the first time that a drug developed in its entirety in Turkey is tested on humans. Sanyal says their work started in 2009 at the Center for Life Sciences and Technologies of Boğaziçi, one of the most prestigious universities in Turkey. She said they produced results last year and managed to develop a new molecule. Though a drug made locally is an achievement for Turkey in and of itself, Sanyal says clinical trials will also mark the first time that a drug developed entirely in Turkey from scratch will be tried on humans.

The professor, who also heads Boğaziçi's Chemistry Department, won the female entrepreneur award of a women's business association this year and says their work is significant to show that "Turkey can do this too."

"We started out with chemical modification of a chemotherapy drug and then, we moved to in vitro experiments. We are now prepared for clinical trials on humans," Sanyal told İhlas News Agency (İHA) about their work. She says their drug is "a targeted cancer drug" that target particular harmful cells and prevent them from imposing their side effects on the rest of the body.

"We basically make them more active inside the tumor they are concentrated. This means an easier treatment process for patients. They are still subject to chemotherapy but limiting side effects helps patients," Sanyal says.

"It may be a late step for Turkey but if approved for distribution, it will be a global product made in Turkey. We still have many years to present the drug to the world," she added.

Turkey pursues what the authorities call a "domestic and national initiative" to reduce its dependence on imports and to promote local projects more in everything from the defense industry to the automotive sector.

A new biotechnological drug, which will be used in treatment of head and neck cancers, was introduced to the public in November, with authorities saying that a trial phase will be launched soon.

Sanyal also notes the majority of women in her team of scientists prove what difference women can make in science. "They are young, bright and I am hopeful about them for the future," she says.