Turkey's aid agency TIKA carries out over 90 projects in Yemen 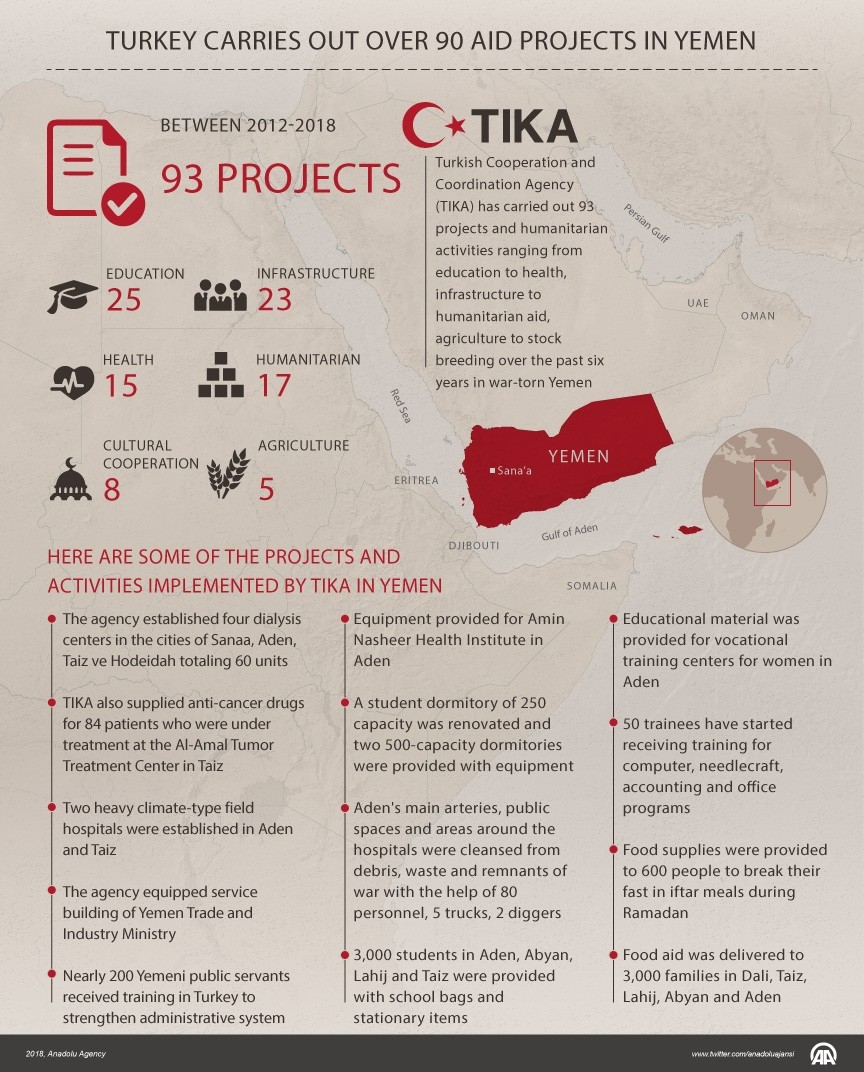 Turkey's state-run aid agency has carried out 93 projects and humanitarian activities over the past six years in war-torn Yemen.

Turkish Cooperation and Coordination Agency's (TIKA) office in the capital Sanaa, which opened in 2012, have realized projects mainly in the areas of health, education, agriculture and infrastructure. 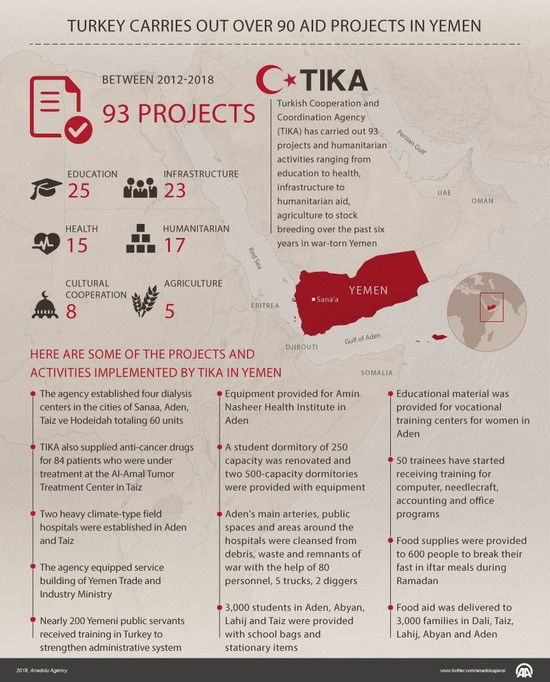 The agency established four dialysis centers in the cities of Sanaa, Aden, Taiz and Hodeidah in 2013. The health centers, which are open 24/7, offer services to 80 percent of the citizens.

TIKA also supplied anti-cancer drugs for 84 patients, who were under treatment in Taiz. It also established two field hospitals in Aden and Taizz.

The agency equipped service building of Yemen Trade and Industry Ministry to make it functional.

In order to strengthen the administrative system of Yemen, the agency provided training to Yemeni public servants.

It also renovated a dormitory with a capacity of 250 students, and equipped two other dormitories with 500 capacity each.

TIKA cleaned debris, waste and remnants of war in Aden as part of the fight against epidemic illnesses, and to make the city more habitable. Environmental cleaning lasted around one and a half months with the help of 80 personnel, five trucks and two diggers.

The agency provided 3,000 students with school bags and stationary equipment in Aden, Abyan, Lahij and Taiz in 2018.

TIKA also supported vocational courses for women and gave training in the areas of computer, needlecraft and accounting programs. It will also open courses of cooking, hairdressing and decoration.

TIKA provided evening meals to 600 people during Ramadan and it also distributed food to families of the wounded and killed fighters at Laylat al-Qadr, which marks the first revelation of the Quran to the Prophet Muhammad.

It also delivered food aid to 3,000 families in Taiz, Lahij, Abyan and Aden.

Yemen fell into civil war in 2014, when Houthi rebels overran much of the country, including capital Sanaa. Yemen's Saudi-backed government to set up an interim capital in Aden.

In 2015, Saudi Arabia and several of its Arab allies launched a massive air campaign in Yemen aimed at rolling back Houthi military gains.

While the Saudi-led coalition has succeeded in wresting some territory back from the Houthis, the rebel group firmly controls Sanaa most of the northwestern parts of the country.