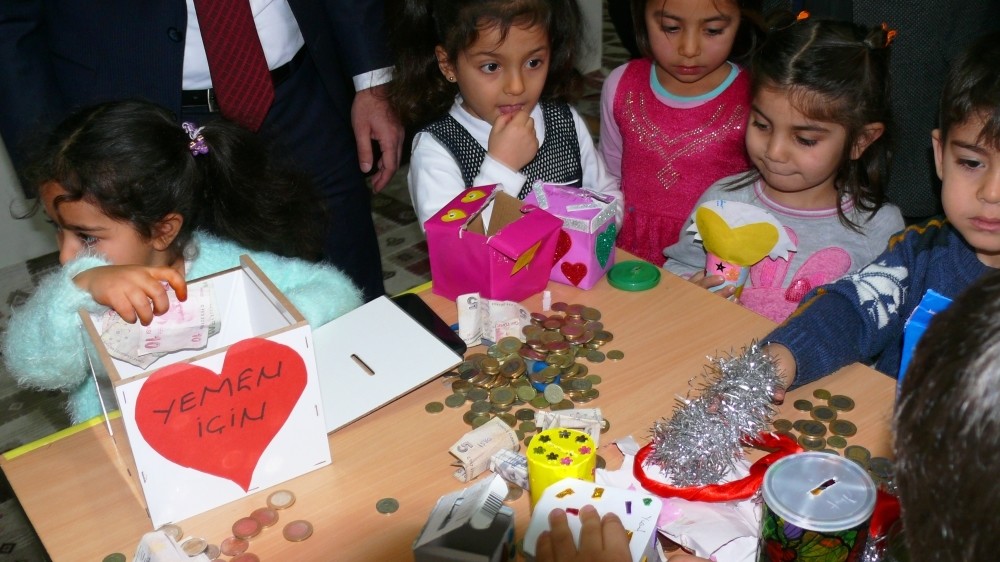 Children in the Yeu015filyurt district of Tokat province hand out money they collected from their allowances to officials for the Yemen aid campaign yesterday.
by Compiled from Wire Services Dec 20, 2018 12:00 am

A call by Turkish President Recep Tayyip Erdoğan has helped boost the aid campaign for war-torn Yemen, raising over $3.8 million in one week

Embattled with famine amid an ongoing conflict, Yemen depends on humanitarian aid from abroad. A recent call by Turkish President Recep Tayyip Erdoğan boosted the donations for Yemen as part of campaigns run by nongovernmental groups and state-run agencies.

In just one week, Turks collected more than $3.8 million in donations for Yemen, according to a report in the Turkish language daily, Sabah.

Donors can contribute to the campaign by sending paid text messages to charities or through wiring money to bank accounts.

More than half a million displaced people in war-torn Yemen face the "double threat" of famine and freezing temperatures as winter sets in, according to aid group Oxfam.

In a statement yesterday, the group said some 530,000 displaced people are in mountainous areas, many living in makeshift shelters with no insulation or weatherproofing. "Freezing temperatures could be the final straw for families already struggling to survive desperate hunger," said Muhsin Siddiquey, Oxfam's Yemen director.

The Yemeni government, backed by a Saudi-led coalition, has been at war with the Iran-aligned Houthi rebels since 2015. United Nations officials say the war has caused the world's worst humanitarian crisis, with millions suffering from severe hunger.

Peace talks earlier this month brought about a cease-fire in the port city of Hodeida but have yet to address the wider conflict. Turkey, which holds the rotating presidency of the Organisation of Islamic Cooperation (OIC) supports the U.N. efforts to establish peace and stability in Yemen.

AFAD president, Mehmet Güllüoğlu, said they were working to end the humanitarian crisis that affects children, sick and the elderly the most. "This is a humanitarian duty for us," Güllüoğlu told Anadolu Agency (AA).

He said more than 22 million people were in need of aid in Yemen, which has a population of 29 million. "People can eat only once in two or three days. They are in need of food as well as medicine, clean water and other basic amenities. A child dies every 10 minutes from malnutrition. More than 2,500 people died of cholera and 1 million people are at the risk of the disease," he said.

AFAD is in touch with Yemeni officials and plans to send a team to the country to coordinate the humanitarian response. "We will continue our aid campaign as long as Yemen needs aid," he added, describing the crisis in Yemen as the "worst in the world."Turkey already donated humanitarian aid worth $11.7 million to Yemen between 2015 and 2018 and transferred $1 million in cash to UNICEF for use in humanitarian aid in the war-torn country.

Turkish institutions and NGOs, including the Turkish Cooperation and Coordination Agency (TİKA), the Turkish Red Crescent and the Turkish Diyanet Foundation, continue to provide humanitarian aid to the war-torn country.

The Turkish Red Crescent opened a small hospital in Aden last year and sent a vessel carrying humanitarian aid worth TL 20 million to the country.