Syrian refugees overcome the negative effects of the war via handcraft 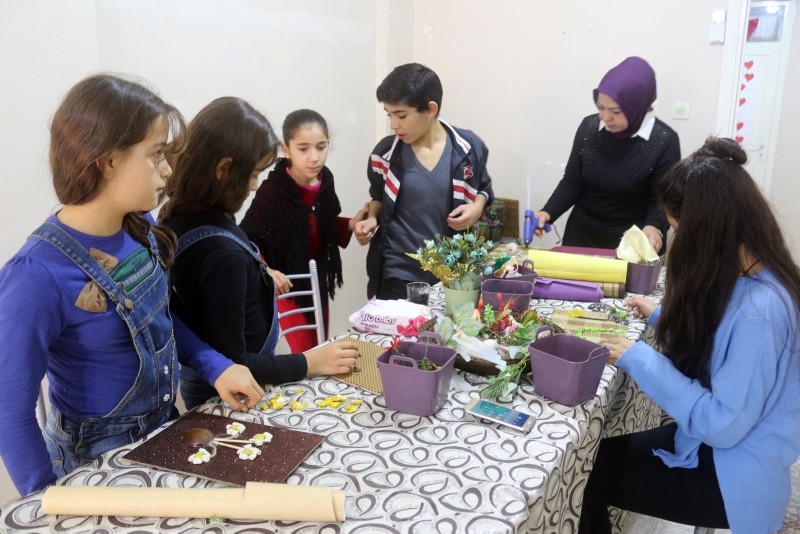 A Syrian judge who had fled her country because of the civil war has been giving handcraft lessons to Syrian refugees in Turkey's southeastern Hatay province in order to psychologically assist them.

Afaf Al Rachid, 55, who served as an attorney for 14 years and a judge for a year in Syria fled the country after the brutal civil war broke out and took shelter in neighboring Jordan. She later came to Turkey in 2015 and started to live in Kırıkhan district of Hatay where she is now giving handcraft courses to Syrian refugee women and children in order to help them overcome the negative effects of the war.

Rachid told Anadolu Agency (AA) that besides working as a lawyer and a judge, she served as a woman rights defender for five years in her country.

She opened the course nine months ago inside a building that belongs to a charity where she works as a district representative.

Rachid helps the rehabilitation process by teaching various skills to the women and children who have been left with deep traces of war and while doing this, she also arranges exhibitions with the handcrafts women made and buys necessary supplies with the income from exhibitions.

She noted that she finds some of the materials they use in handicrafts from nature such as woodchips or stones.

Saying that she first learned how to make handcrafts in Dubai and had several exhibitions in Syria before, Rashid said that she is now using it for a different cause.

"I saw that women and children fled from the war need social jobs, and I am trying to support them in this way in order to remove the traces of war in their heads. My goal is to provide a better life for women and children here, to heal their mental health," Rashid said.

One of the participants, Heyfe Müteve, 65, who attends the courses with her two grandchildren told AA that she likes "making nice products."

13-year-old Abdo Murat who continued the course for about three months said that he began to learn handcrafts after his cousins encouraged him to learn.