Turkey reaches out to 700,000 Rohingya Muslims 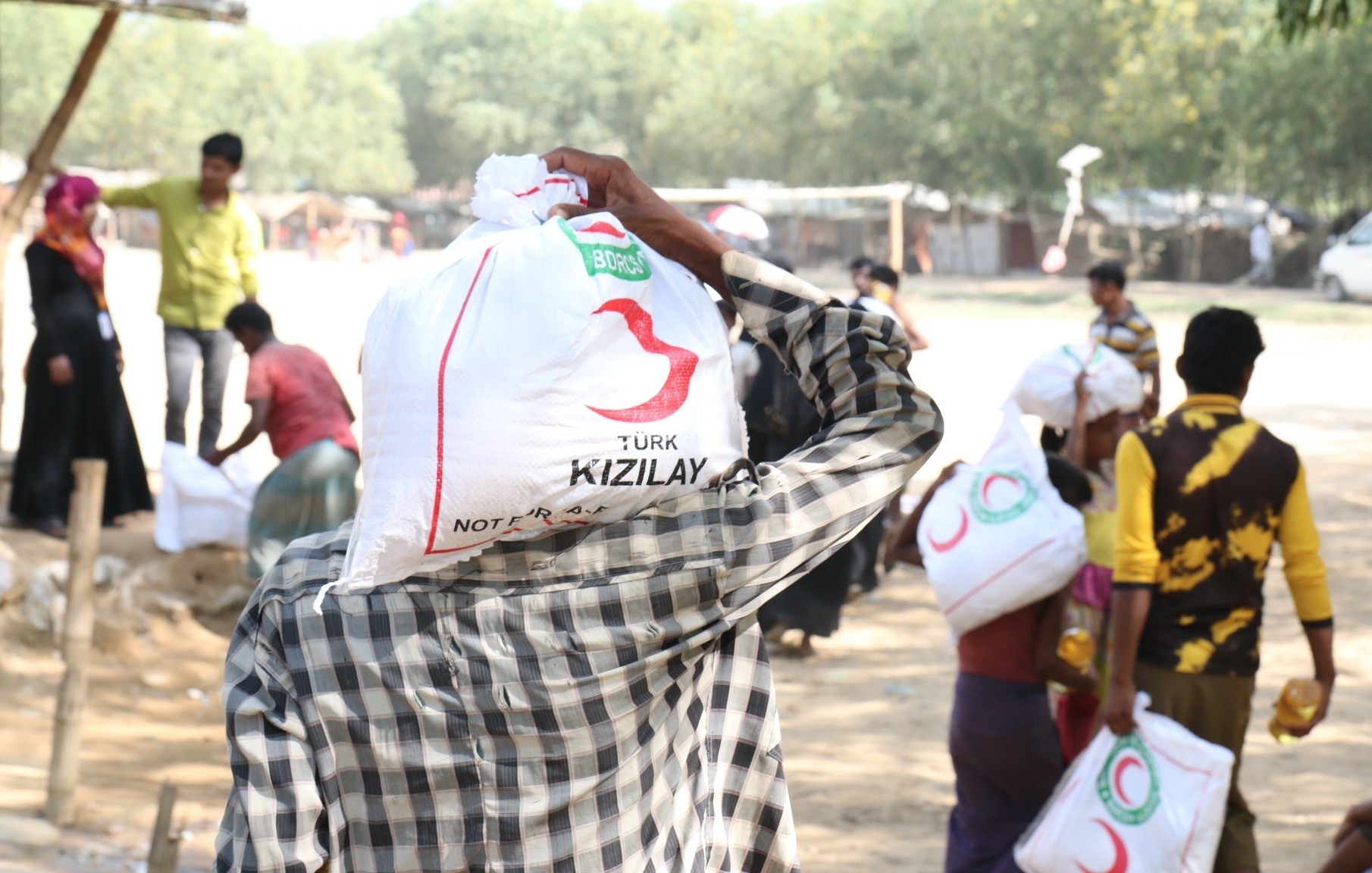 A man carries a bag with food aid distributed by the Turkish Red Crescent at a camp for Rohingya Muslims in Bangladesh in this undated photo.
by Daily Sabah Jan 01, 2019 12:00 am

Persecuted in their homeland, hundreds of thousands of Myanmar's Rohingya Muslims fled to neighboring Bangladesh. The humanitarian aid campaign Turkey launched last year, upon calls by President Recep Tayyip Erdoğan, caught the attention of the public's conscience. The country has so far reached out to at least 700,000 Rohingya Muslims with humanitarian aid.

Charities, state-run organizations and individuals set up camps, hospitals and water wells and distributed aid to the community. In one year, more than 2,000 tons of food packages were delivered to the displaced Rohingya Muslims. Some 165,000 people received free medical treatment and more than 300,000 others receive psychiatric treatment to cope with what they suffered at the hands of poverty, military oppression and other misfortunes in Myanmar.

The community is slowly building a new life and hundreds of bamboo houses, Turks helped them build, will give them a new place to start over, though their suffering far from their homeland lingers on.

Hundreds of thousands of Rohingya Muslims poured across Myanmar's border with Bangladesh after a wave of anti-Rohingya attacks in the summer of 2017. Thousands were killed in the violence and those forced to flee faced dire poverty and the threat of diseases in crudely built camps in Bangladesh.

The U.N. has described the operations by Myanmar security forces as ethnic cleansing. The stateless Rohingya have been the target of communal violence and vicious anti-Muslim sentiment in mainly Buddhist Myanmar for years. Myanmar has denied citizenship to Rohingya since 1982 and excludes them from the 135 ethnic groups it officially recognizes, which effectively renders them stateless.

Turkey has always been among the most vocal supporters of the community, repeatedly drawing attention to their plight. Turkish charities had joined forces after mass displacement of Rohingya Muslims in 2017 and quickly collected millions of Turkish liras for setting up a lifeline of humanitarian aid to camps in Bangladesh.

Turkey's Disaster and Emergency Management Authority (AFAD), the Turkish Red Crescent and the Turkish Cooperation and Coordination Agency (TİKA) are at the forefront of accommodation efforts for the displaced. They set up some 400,000 tents for Rohingya Muslims in camps near the Bangladeshi border. The AFAD runs one of the biggest humanitarian assistance operations in the region, providing health, food and accommodation services. This Turkish state-run agency set up 10 water wells and water distribution points at the refugee camps.

AFAD's crews also distributed some 20,000 food packages to the displaced, along with thousands of toys for children and constructed playgrounds for the displaced children.

One of the most critical services the AFAD provides is psychiatric support, especially for women who were raped by Myanmar forces during the 2017 wave of attacks. AFAD teams go door to door to contact women. A field hospital also provides basic health services for the displaced and offers surgeries. Some 165,000 Rohingya Muslims underwent treatment and surgeries at the hospital in one year.