Life without plastic bags begins with challenges and praise 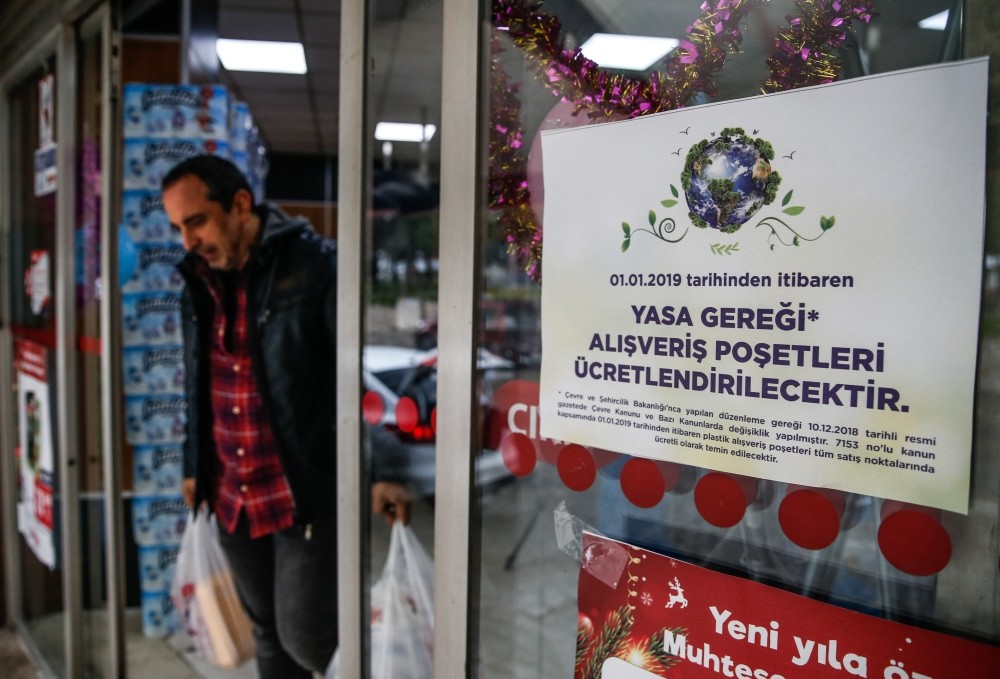 A sign reading ,shopping bags will be charged under new law, at a supermarket in the western city of u0130zmir.
by Compiled from Wire Services Jan 04, 2019 12:00 am

The Turkish public is striving to adapt to a life without plastic bags, or rather having to pay for them, two days after they were banned from being given away for free. Some hail the move, saying it is helping fight plastic pollution, while others have come up with ways of avoiding paying, like tucking the goods they bought into their coats

An era ended in Turkey on Jan. 1 when the government banned free plastic bags in stores and it will apparently take some time for Turkish public to get used to this. Looking to avoid paying the mandatory TL 0.25 ($0.5) for one bag, shoppers have either opted to carrying the purchased goods with their bare hands or got creative, like a man who was recorded tucking the goods he bought from a store in his rolled-up coat.

"People value things they paid for and be more careful. But I think we need an outright ban on plastic bags," Şerafettin Arabacı, a shopper from the southern city of Adana who is among proponents of the ban, says.

Nurhan Gülbaş, another supporter of the ban who spoke to İhlas News Agency, says mandatory payment is a good way to minimize the pollution that plastic bags cause to the environment. 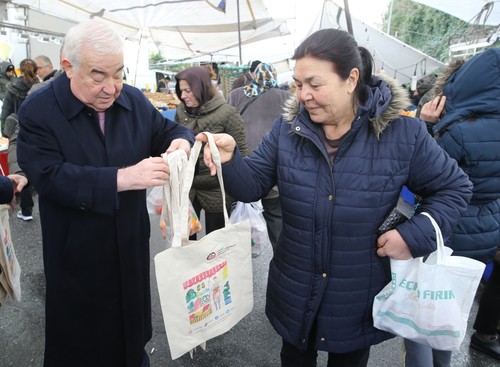 Authorities seek to encourage use of canvas bags instead of plastic and a business association in Istanbul delivered free canvas bags to shoppers at an open-air marketplace on Jan. 3.

Kadir Uçar agrees, although he does not want to pay for bags. As he pushed his shopping cart to his car outside the supermarket in the northern city of Tokat, Uçar said he is fine with the ban but it is better for him to carry the purchased stuff in the cart instead of paying for the bags that are "worth the price of one loaf of bread."

Ömür Yurtseven, who runs a supermarket in the capital Ankara, says people were fine with the ban and most of his shoppers either brought used plastic bags for shopping or used canvas bags they purchased before.

A United Nations report says an estimated 5 trillion plastic bags are used worldwide every year, and they mainly contribute to maritime pollution as some 8 million tons of plastic including bags are dumped into the ocean every year, killing marine life and entering the human food chain.

Still, it is a high price to pay for some shoppers, especially in mass purchases. A widely circulated image on social media shows a customer getting a refund from a discount store for plastic bag he bought with his shopping, citing the bag was of inferior quality. Other images which went viral show customers arriving in stores with handcarts commonly used in construction sites. Another popular image shows a mother and her son repairing old, torn plastic bags by sewing them. Some citizens opt for bulk purchase of plastic bags for a cheaper price from wholesalers.

Small plastic bags are still free but Turkey looks to promote the use of canvas bags while supermarkets put canvas bags on sale near counters for a price of TL 1. In some cities, municipalities delivered free canvas bags days before the ban went into effect.

Ahmet Varır, director of the zero waste management department at the Turkish Ministry of Environment, says there was a 70 percent reduction in use of plastic bags on the first day of the ban on free bags. Speaking to Anadolu Agency (AA), Varır said the reaction was mixed and they received both criticism and support from the public. "People are aware that it creates an environmental problem and we believe the opposition [to the ban] will decrease more when people understand better how good [to limit the use of plastic bags] is," he said.

"We think use of plastic bags will decrease more and more in the coming days," he said. Varır also clarified that the public misunderstanding that stores profit from the sales of bags.

"They have to pay a fraction of price they charged customers to our ministry. There is no way they can profit from sales of plastic bags," he said.

Meanwhile, it will still take time for people to get accustomed to it as Taner Gökçe points out. Gökçe, a native of the western town of İnegöl, is known for his video where he tucks goods he purchased into his big coat in protest of the ban.

"I told the cashier that I would take off my trousers to [carry the items] if necessary instead of paying for bags," Gökçe proudly says. "I hope the government will do something about it," he told İhlas News Agency.