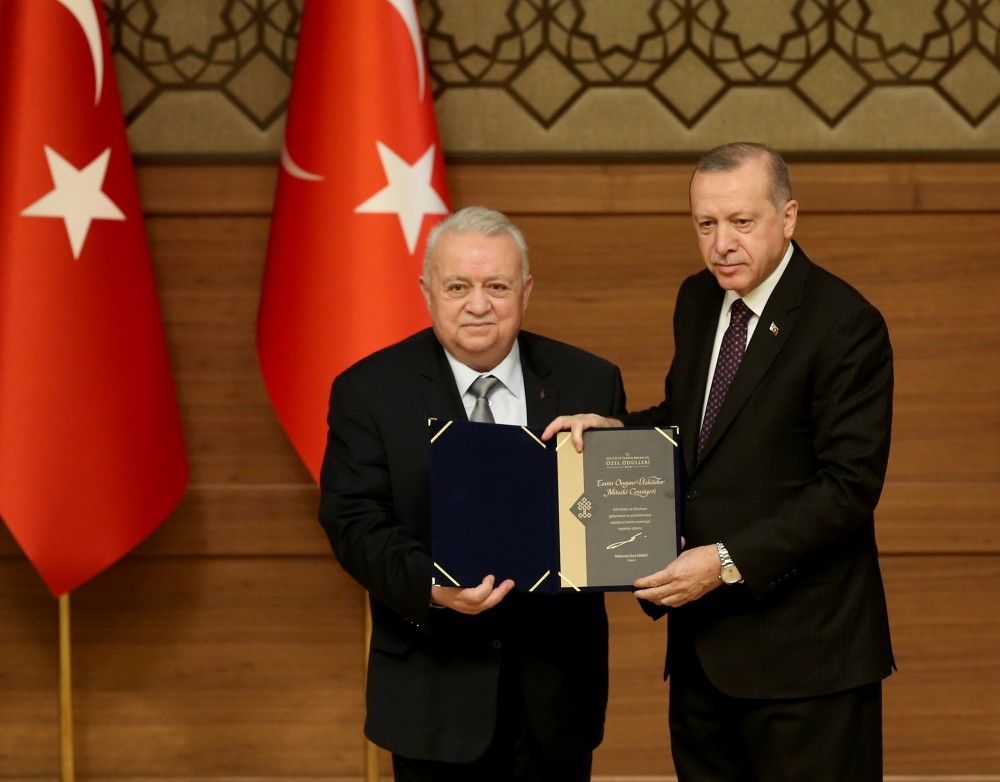 President Recep Tayyip Erdou011fan presented a Culture and Tourism Ministry award to Amir Ateu015f, head of the u00dcsku00fcdar Music Society, at a ceremony in Ankara yesterday.
by Daily Sabah Jan 11, 2019 12:00 am

At a ceremony in the presidential complex in the capital, Ankara, Thursday, a museum that doubles as a research center dedicated to the late legend of world of photography, Ara Güler, and a historic music society in Istanbul received awards from the Culture and Tourism Ministry.

President Recep Tayyip Erdoğan delivered the awards to representatives of the museum and the society.

The Ara Güler Archive and Research Center and Ara Güler Museum were awarded for their contribution to Turkish photography as the country's first photography museum. The center and museum is home to thousands of photos from the collection of Güler.

Dubbed the "Eye of Istanbul," Güler, who died in October 2018 at the age of 90, rose to fame with his black-and-white portraits of Istanbul.

He belonged to a family of Turkish intellectuals, and in a career that spanned several decades, he worked for Magnum Photos, Paris Match and Germany's Stern among other organizations, interviewing and photographing politicians and artists.

Güler's photo interviews with many well-known figures such as British politician Winston Churchill, British philosopher Bertrand Russell, ex-Indian Prime Minister Indira Gandhi, Spanish painters Salvador Dali and Pablo Picasso and U.K.-born film director Alfred Hitchcock brought him international fame. A self-described photojournalist, he could not escape the definition of "photography artist" in Turkey, especially with his black-and-white photos of Turkey in the 1950s that remain the most realistic rendition of the period along with their artistic value.

Speaking at the awards ceremony, President Erdoğan, who was one of the last politicians Güler photographed, heaped praise on the late photographer. "We used to meet many times in recent years; he was a true gentleman," he said, adding that the archive he left would keep his art alive.

The other recipient of the award, the Emin Ongan Üsküdar Music Society, was launched in 1918 under the name the Anatolian Music Society by a group of music lovers. It changed its name after the titular Istanbul district where it is based in 1923. Decades later, it was named after Emin Ongan, a violinist, maestro and lecturer at a prestigious music school in Istanbul who dedicated more than five decades of his life to society.

Starting as a modest gathering of amateur musicians and singers, it evolved into a school educating pianists, violinists and singers with a focus on Turkish classical music or sanat (art) music, a genre tracing its roots to the late Ottoman period. Music in its title is "musiki" in Turkish, an old name used for sanat music that emphasizes the use of traditional Turkish and regional instruments such as ud (oud) and kanun (qanun - an instrument similar to the zither). It trained musicians and singers and served as a launching pad for the careers of renowned musical educators. The society counts Avni Anıl, a renowned composer of Turkish sanat music, Ahmet Özhan, one of the most famous sanat music singers and legendary diva Müzeyyen Senar among its students and members. Tarkan, one of Turkey's few internationally recognized pop stars, who started his career as a sanat music singer, was also educated at the Üsküdar Music Society.