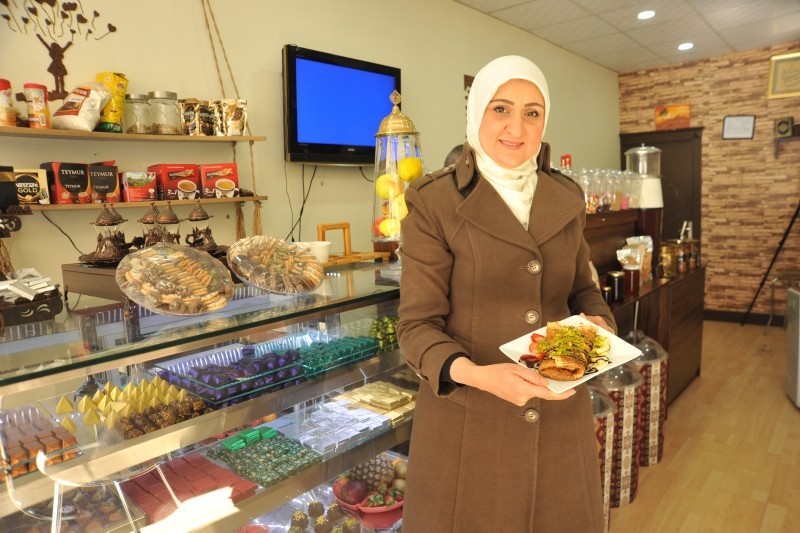 Lubna Hilli poses with her chocolate products in her 'chocolate house' in Gaziantep. (AA Photo)
by Daily Sabah with AA Jan 16, 2019 12:00 am

A Syrian refugee woman has at last realized her childhood dream of opening a chocolate store, and even though it's not in her home town she is happy to have it in Turkey's southeastern Gaziantep province — the city she came to as a refugee after fleeing her country due to the ongoing brutal civil war.

Lubna Hilli came to Turkey with her two daughters in 2015 from Syria's Aleppo after her husband, who was a serving officer in the Syrian army, was arrested by Bashar Assad.

Hilli told Anadolu Agency that due to the ongoing events in her country she had to quit her job as a human resources manager at the Ministry of Water and Irrigation in Aleppo where she started to work after graduating from Aleppo University in 2000.

She said that they did not immediately leave their country when the clashes started and waited for the war to end, however "in 2015 we came to Gaziantep since we were no longer able to withstand the unbearable situation," after her husband was arrested. He managed to flee Syria in 2018 and was reunited with his family in Turkey.

Hilli said that it was hard to start a new life in a new country and she cooked meals at home for various associations and non-governmental organizations to earn a living and then decided to open her own store where she would be able to do what she loves.

Establishing a café-like store named "Çikolata Evi" (Chocolate House), Hilli said that she wanted to come up with different and innovative ideas while doing what she has been good at since childhood.

"I wanted to create something that had not been done yet. I serve chocolate kebabs, fast food products made from chocolate, waffles, fruit sushi and fried ice cream. Our customers love these," she said.

Hilli said that she loves living here as Turkey opened its doors when they first came here as refugees, and added that although she knows very little Turkish she often gets help from her daughters to communicate with the locals. She said she wants to learn Turkish to speak fluently.