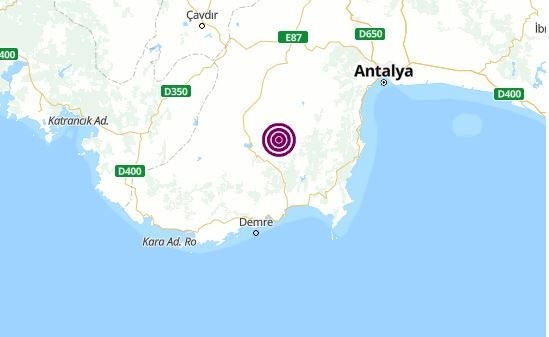 The epicenter of the quake was located at a preliminary depth of 7.31 kilometers.

Meanwhile, Boğaziçi University's Kandilli Observatory and Earthquake Research Institute reported that they had recorded the epicenter of the tremor as Finike at a magnitude of 4.1.

The earthquake sent some residents running out of their homes onto the Street. It was also felt in nearby provinces.

Antalya was recenty hit by heavy rain and rare tornadoes which wreaked havoc in the Kumluca, Kemer and Finike districts of the southern resort city.

Turkey, situated on major seismic fault lines, is regularly hit by earthquakes. Scientists have warned that the epicenter of Turkey's next big earthquake is likely to occur under the Sea of Marmara, where the North Anatolian Fault (NAF) passes.