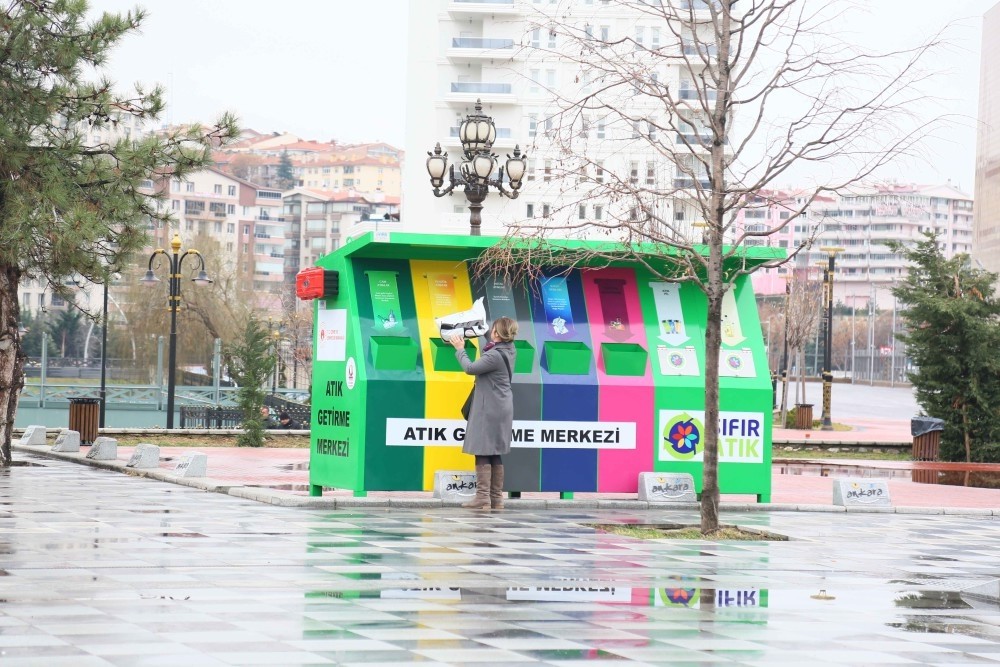 A woman dumps waste at a garbage collection point where different garbage is required to be dumped separately as part of zero waste project in Keu00e7iu00f6ren, Ankara, Feb. 13, 2019.
by Daily Sabah Feb 16, 2019 12:04 am

Looking to boost its Zero Waste Project, Turkey seeks to create its own Kamikatsu, a Japanese town that became world-renowned for its top recycling rate, media reports say. A town will be picked out of more than 900 where every type of waste will be recycled

The Zero Waste Project launched by first lady Emine Erdoğan has progressed as more people join the effort to recycle and sort waste. A report by Turkish media outlets says authorities are now scouring towns in 81 provinces to find a town that will be fully adherent to zero waste, like Japan's Kamikatsu.

Kamikatsu, a small town with about 800 households, won global fame for its zero waste efforts and for recycling more than 80 percent of its waste three years ago, inspiring many others, including Turkey, to curb random and misguided practices for eliminating waste.

Like in Kamikatsu, all types of waste will be collected separately in Turkey's zero waste town, Hürriyet newspaper reported. Organic waste will be turned into compost to grow crops, while recyclable materials will be processed in recycling facilities to be converted into new goods. Moreover, the town will have electric garbage vehicles to curb emissions.

Reverse vending machines to collect plastic, metal and glass waste will be installed in the town and will give free cellphone and internet credits in exchange for putting recyclables in the machines.

The Environment and Urbanization Ministry is behind the project and will conduct an awareness campaign in the town to help locals become more familiar with the zero waste concept. The ministry will also provide equipment and experts to implement the project in the town.

The campaign for zero waste launched by Erdoğan in 2017 under the auspices of the Turkish presidency has gathered a lot of momentum with nationwide support. Thanks to the campaign, Turkey started to rediscover its potential to be a more eco-friendly country, despite heavy industrialization in recent years.

The ensuing recycling drive saw zero waste collection areas set up in more places, from shopping malls to businesses, schools, hotels, airports, etc. The drive saved more than 30 million trees between 2017 and 2018, with the recycling of more than 1.7 million tons of paper waste and cartons.

Amid rising concerns about environmental damage that comes with rapid economic growth, Turkey has started to prioritize waste management with more cities upgrading their waste management systems. The country also managed to recycle more than half of the plastic bottles in the market in one year. According to the last available data from 2017, of 236,000 tons of plastic bottles sold in 2017, approximately 140,000 tons were recycled.

Under a new draft bill, every business or public institution will be required to receive a zero waste certificate that will evaluate how it complies with the new policies. The bill also makes it mandatory for municipalities to set up facilities for the collection of waste separated at its source. For large cities, garbage disposal units to store recyclable materials will be placed every 400 meters, and mobile units will be placed in neighborhoods to pick up recyclable waste. Municipalities will also be required to inform the public on how to separate recyclable waste and where to dump it.

Turkey also seeks to spread compost-making equipment to convert food waste to compost for home use.

Mehmet Emin Birpınar, deputy minister of environment and urbanization, says all of Turkey will switch to the zero waste system by 2023, the centennial of the Republic of Turkey. Speaking at an event in the capital Ankara last week, Birpınar said they drafted regulations for nationwide implementation of zero waste applications, and the ministry spent more than TL 20 million last year for equipment to collect zero waste alone.