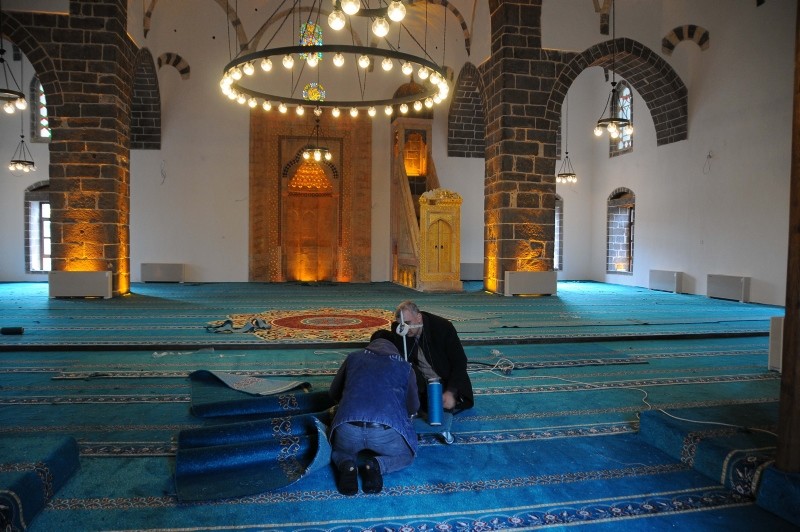 Restoration work on a landmark Ottoman-era mosque which was damaged by the PKK terrorists in Turkey's southeastern Diyarbakır province has been completed and it will be opened to worship in the coming days, reposts said Wednesday.

Fatih Paşa Mosque, commonly known as Kurşunlu Camii in the Sur district of Diyarbakır which was one of the first buildings that Ottomans built in the city 503 years ago, was destroyed by the PKK terrorists during operations that aimed to clear the southeastern cities from terror elements.

The mosque, which was built between the years 1516 and 1521 upon the order of Bıyıklı Mehmed Paşa, then governor of the Diyarbakır province, was renovated in accordance with its original structure.

The gold foiled minbar (pulpit) of the mosque, which was burned by the terrorists was renovated completely in accordance with its original version while special light-reflective marbles which were used in the construction of Taj Mahal that was built in the 17th century and is accepted as one of the most important works of Islamic shrine architecture, were also used in the restoration of the mosque.

Saying that the mosque will be opened to worship again, Sur District Governor Abdullah Çiftçi noted: "It was very detailed, very technical work carried out there. An intense effort was made to bring history back to the stage."

Çiftçi said that the attacks targeting the mosque, the use of the mosque as a place for the terrorist organization shows how far PKK is from the Islamic values.

"We want to raise the voice of peace, brotherhood, and the unity of people in Diyarbakır," the governor said.

Saying that they want the historical Sur district to become a center for tourist attraction, Çiftçi underscored that there has been an increase in the number of tourists coming to the region in the last couple of years, after the restoration works were launched to renovate the places that were targeted by the terrorists.