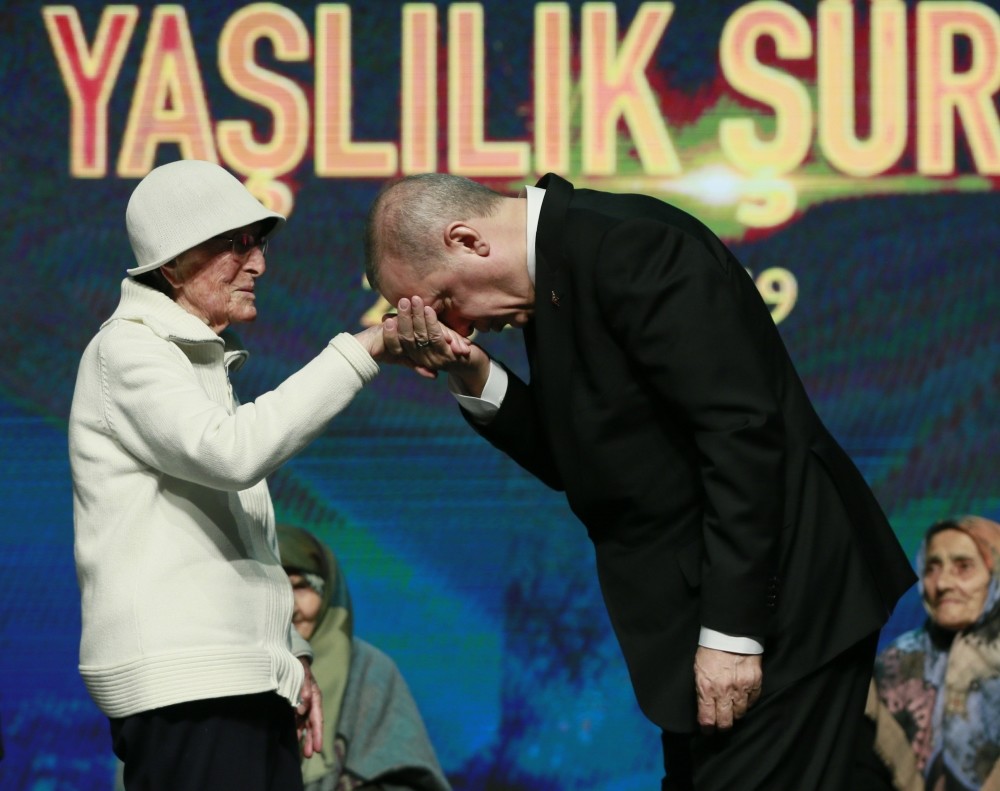 The Beştepe Presidential Complex in the capital Ankara hosted the First Council on Aging Wednesday as the country debates how to resolve the issue of an aging population. Centenarians from across the country joined President Recep Tayyip Erdoğan at the event, which was followed by a meeting between ministers from various countries to discuss improving policies for the elderly.

Turkey prides itself as a culture that respects the elderly as President Erdoğan demonstrated by kissing the hands of his centenarian guests. The president urged the spreading of this culture but also highlighted the need to reverse the trend of an aging population. Repeating his famous advice to newlywed couples to have at least three children, the president said in his speech at the event that the population of senior citizens would increase over the years and double by 2040.

Projections made by the Turkish Statistical Institute (TurkStat) show that the elderly population will increase to 10.2 percent by 2023 and is expected to rise even further in the following decade. Experts link these projections to a decline in fertility and the availability of new treatments that increase longevity. "The world, especially developed countries, are aging. Average life expectancy is now over 70, even 90 in some countries. This also gives rise to a set of issues. For instance, Western countries try to fill the gap in a workforce reduced because of an aging population with migrants. The situation is not so dire in Turkey, but it is still problematic. The number of people aged 65 and above reached 8.8 percent. This means 7.2 million senior citizens," he said, pointing out that Turkey needs "a dynamic, young population."

Erdoğan said that another issue was care for the elderly. "Care is not limited to financial means. We have to ensure that they remain active individuals and remain in touch with their families. This is how we should shape our policies for them," Erdoğan said. He added that although they attached importance to assisted living facilities, they also provide care at home for the elderly through social services workers. "What matters most is to keep the elderly with their families and active in social life. This is what is expected from a culture that respects its elderly by defining them as wise people and offering them the highest positions in society," he said. The president said that the government was working on a road map for policies toward the elderly and it focuses on active aging.

The event ended with Century-Old Planetree awards for eight centenarians. The planetree symbolizes aging and the elderly in Turkish culture.