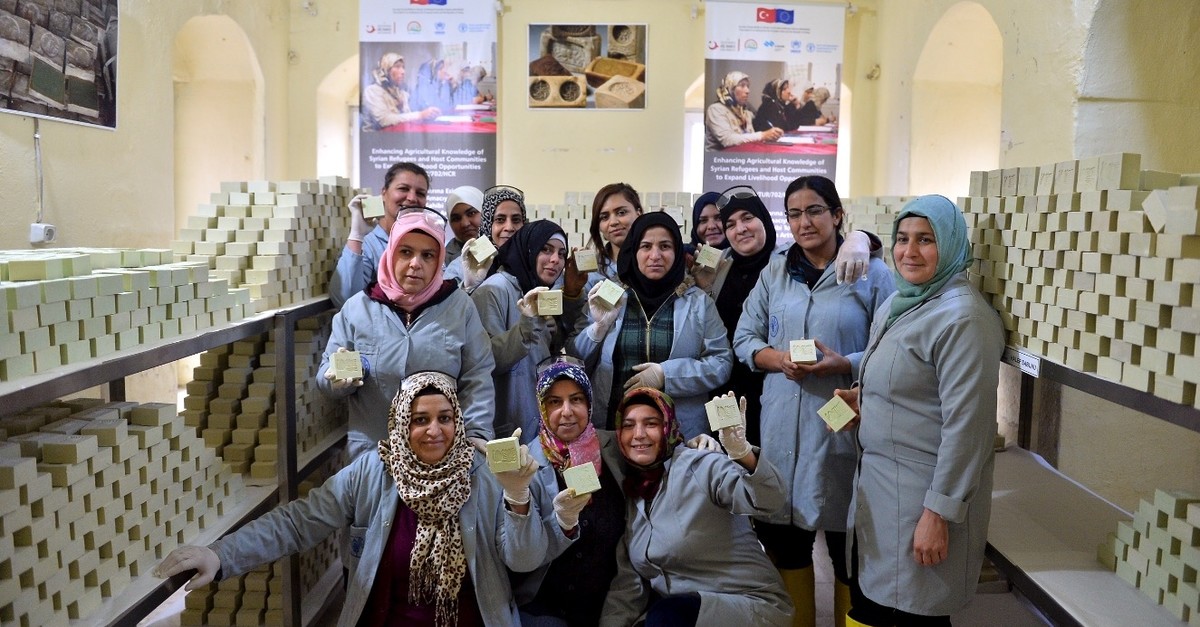 Away from its birthplace in Syria, Aleppo soap, the oldest of its kind in the world, finds new life in a Turkish workshop where Syrian refugee women teach locals how to make it and earn money on the side

Syrian women in Mardin, a southeastern province, bubble with enthusiasm as they gather around large vats, stirring a thick mixture of olive oil. Local women watch carefully, as this is a training session for their future job. All of these people in an old manor in the historic city are the staff of a workshop to produce Aleppo soap, dubbed the world's oldest.

Its production almost came to a halt in war-torn Syria, but women who fled their country and became refugees in Turkey are intent on reviving it. Supported by the Turkish government, the European Union, the United Nations, the Turkish Red Crescent and a local non-profit organization, the workshop in Mardin's Artuklu district aims to boost female employment in Mardin, while offering job opportunities for refugees at the same time.

After a brief training period, local women are ready to join Syrians to produce the soap, which resembles a slab. Forty-four women, including 21 Syrians, labor in the small workshop to produce 1,000 bars of soap every day.

Aside from a few changes to the ingredients, Aleppo soap is no different than its original version traditionally produced in the eponymous city that is now mired in a civil war. Instead of olive oil of their homeland, Syrian women now use olive oil from trees in Derik, a Mardin town. Boiled in vats, it is added to soda and pure water and differs from other soaps with its all-natural ingredients, with 93 percent olive oil. It is not a quick process as the thick mixture must be cut into bars and left for drying for about three months.

Siham Ahmad, a 53-year-old Syrian refugee who took shelter in Turkey with her family about six years ago, says she immediately applied when she found out about the project. She is no stranger to the business as it was her family business back in Syria. "I both make the soap here and teach to my Turkish sisters how to make it," Ahmad told Anadolu Agency (AA). "This is one of the oldest soaps in the world, and it was originally made of olive and laurel oil. I hope my children and grandchildren will also take up this business. Aleppo soap does not contain any chemicals so it is very healthy. It does not cause hair loss and is healthy for the skin," she says. Ahmad adds that she hopes to return to Syria one day and continue production of the soap there.

Amina Isa, another Syrian woman who took shelter in Mardin, said soap production helped her to earn extra income for her family. "I am happy that we can earn money here. Our brothers and sisters in Turkey helped us a lot, and now we work together with them. Turkey feels like a genuine home for me, and I am grateful to people behind this project," she said.

Ayşegül Çakırcı, a mother of three living in Mardin, joined the refugees after her training three months ago. "I used to be a housewife and wanted to do more for my family. I like working with Syrian women here. They taught us many things, and we taught them a few things too. We like each other very much," Çakırcı said.

Sales have not started yet, but women already have a big-name client: the Food and Agriculture Organization (FAO) of the United Nations, which has placed a "large order," Project Coordinator Ebru Baybara Demir said, adding that women so far have produced 20,000 bars of soap and many people who heard about the project are waiting for sales to start soon, once the drying process is completed.