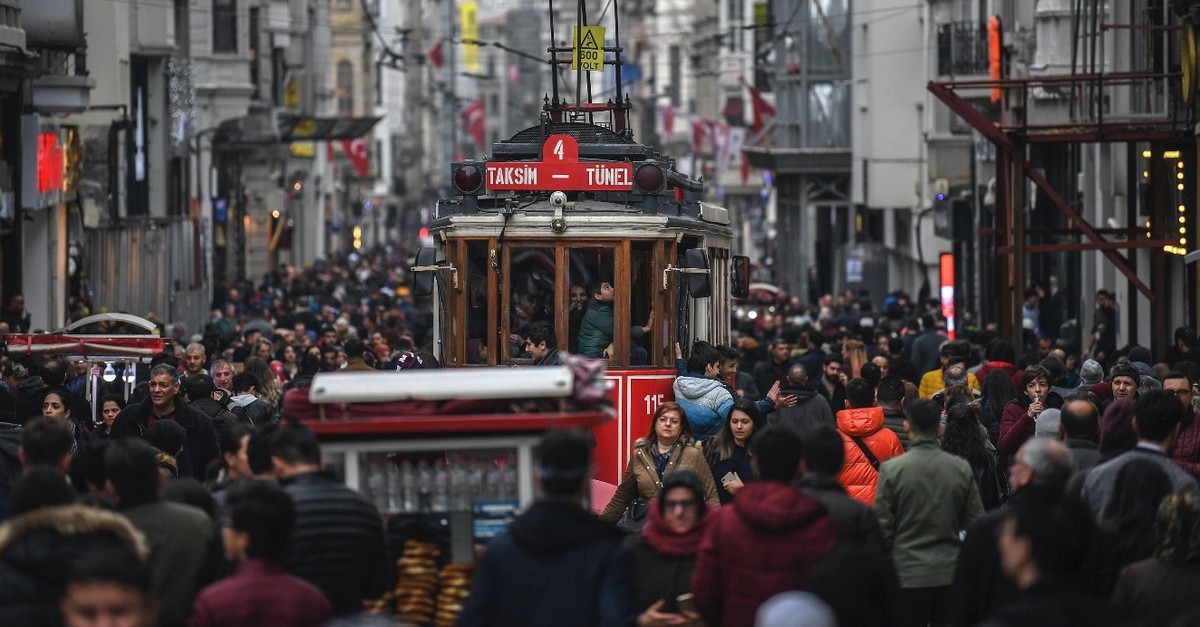 A tramway drives through a crowd in u0130stiklal Avenue, Istanbul, Jan. 25, 2019. The happiness rate dropped in the country last year though hopes for a better future prevail according to a TurkStat survey.
by Daily Sabah Feb 23, 2019 12:06 am

A life satisfaction survey for 2018 revealed Friday that happiness levels are higher for married couples and women, though fewer people were happy with their lives in the country compared to 2017

Happiness can be relative and slightly on the decline, but the number of Turkish citizens happily living in the country is still strong. Married people, women and senior citizens are among the happiest. That's what the life satisfaction survey released by the state-run Turkish Statistical Institute (TurkStat) on Friday about the 2018 figures on what makes people happy says.Last year was turbulent for Turkey, especially in terms of the economy, where the Turkish lira took multiple hits and the inflation rate soared while the country was striving for growth. TurkStat figures show the rate of people who answered the institute's survey who said they were satisfied with living in Turkey decreased to 53.4 percent last year from 58 percent for 2017. This does not mean that the lives of the rest were bleak as the number of people calling themselves unhappy rose to 12.1 from 11.1 percent and the remainder did not express their opinion on the levels of their life satisfaction.

How one sees happiness can vary but invariably it was the senior citizens, those at the age of 65 and above, who were the happiest, according to survey. An overwhelming 66.1 percent of the elderly declared themselves happy, apparently a reflection on how age may change views of happiness. Those between the ages of 45 and 54 were the most "unhappy" citizens, the survey shows.

Marriage is another factor in happiness, the survey indicates that the rate of married people declaring their happiness was higher than single citizens. Moreover, married women were happier compared to married men.

The survey also answers what makes citizens happy. Family, as it was the case in previous surveys, made people happiest. Children were the second source of happiness for 12,9 percent of interviewed citizens. The spouses follow children in the source of happiness. Being healthy also makes people the happiest. Some 15.5 percent of those responding to the survey said it was love that made them happy. Success, money and jobs followed love, respectively, as sources of happiness.

On an educational level, people who did not attend school or dropped out were happier compared to those who graduated. Some 53.9 percent of "happy people" were graduates from an institution of higher learning.

The survey also delves into people's satisfaction with services. People were most satisfied with security services. This was a given though, as security significantly improved in the country, whose past is tainted with a string of terror attacks. No major terror attacks took place in the country last year. Large-scale operations against terrorist groups ranging from the PKK and Daesh to the Gülenist Terror Group (FETÖ) certainly played a role in better security. It was followed, at 74.8 percent, in satisfaction with transportation services. This was expected too as Turkey has invested heavily in its road network and high-speed train services, while the number of flights across the country is gradually being increased. Health, social security, education and judiciary services also had high satisfaction levels for the public.

Happiness may be on the decline but hope prevails. The rate of those who say they are hopeful for a brighter future was 72.1 percent in 2018. The rate of men expressing hope in the future surpassed women, TurkStat figures indicated.