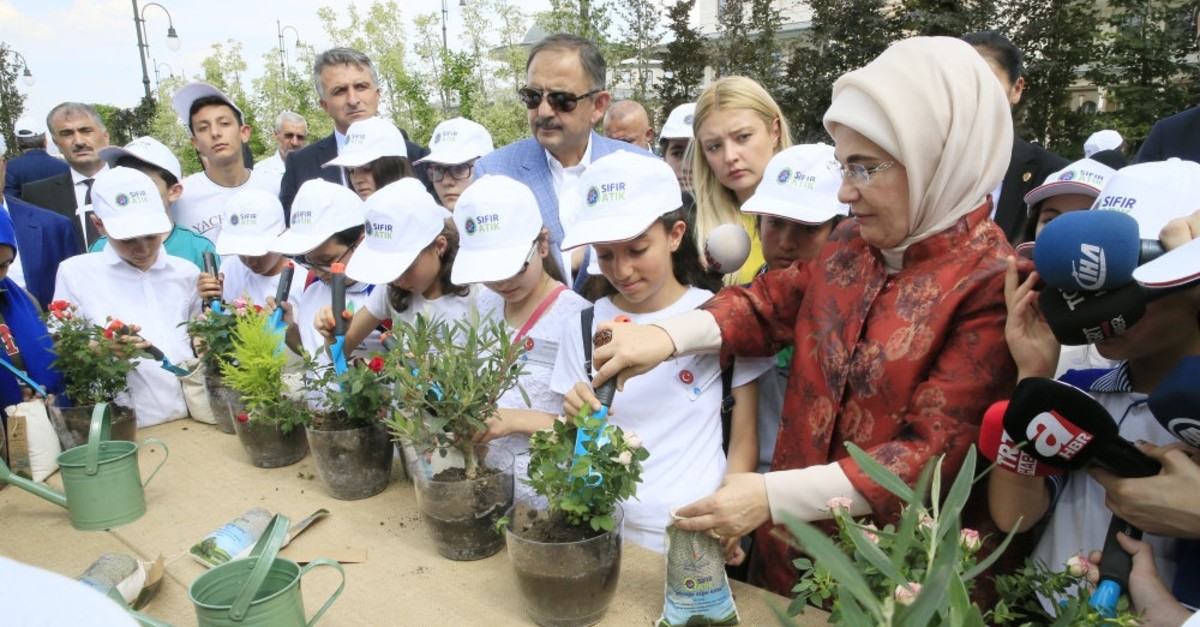 The Zero Waste project launched by first lady Emine Erdoğan and conducted by the Ministry of Environment and Urbanization, has been setting an example in Turkey and beyond to address the problems in waste management by increasing awareness about recycling. Aside from changing people's habits and their approach to the environment they live in, the project is also substantially contributing to the country's economy by providing a huge amount of savings.

The campaign first started at the Beştepe Presidential Complex in the capital Ankara and soon spread to other public institutions, including ministries as well as to private enterprises. In relation to the issue, Vice President Fuat Oktay stressed that the Zero Waste project will be implemented in all regions of Turkey until 2023, enabling a saving of about TL 20 billion.

In a recent move, the Turkish Foreign Ministry started to implement zero waste management in its buildings in February. The ministry told Daily Sabah that prior to implementing the project in the ministry's buildings, the source and amount of the waste produced in the ministry was determined and a needs analysis was made for waste sorting and temporary waste storage.

Accordingly, it was found that 61 percent of the waste produced by the ministry was paper. Following consultations with experts from the Ministry of Environment, it was decided that the waste that has been produced in the offices would be sorted in three categories. In order to store the waste that was sorted, a 125-square-meter waste storage area was built in the ministry's garden. The ministry's personnel were also given detailed information on how to implement zero waste management.

While the leftovers in the dining hall are sorted accordingly, the organic waste such as fruit and vegetable peels have been composted and are used to improve the quality of the soil in the ministry's garden.

Currently, in 13,357 buildings including public institutions, schools and shopping malls, zero waste management has been implemented. The project has already yielded significant success; 10 tons of metal waste were sorted and 30 tons of paper were recycled.

In order to produce 1 ton of paper, nearly 17 trees need to be cut down. Within the scope of the zero waste project, the paper and paper boxes collected as waste have been saving thousands of trees. Each tree produces oxygen for two people. With the recycling of a ton of paper nearly 12,400 cubic meters of greenhouse gas is being prevented.

Some 4,000 years are needed for the complete disappearance of a glass bottle, while it takes 1,000 years for a plastic one to vanish. Therefore, the Zero Waste project targets to sort plastic, glass and metal waste and store each of them separately. The recycling of this waste will contribute to economic savings and protecting natural resources.

The first lady's Zero Waste project was also highlighted in the Organization for Economic Co-operation and Development's (OECD) review of Turkey's environmental performance.

As part of the Zero Waste project, there is an a plan to implement waste management as a whole in a particular district, setting an example for the country.

The Ministry of Environment has been working on determining the respective district to establish a zero waste management system similar to Japan's Kamikatsu district, which is continuing its efforts to become the world's first zero waste town.

Furthermore, zero waste management will be used in all parts of the district and the waste will be sorted according to its different types. The ministry will determine the most suitable district for the implementation of the project and also support the maintenance of the project by informing the people living in the district.

As per the example of Kamikatsu, people wanted to live with zero waste. With a population of 2,000, the effort to reach a zero waste target was started in 2003 in Kamikatsu. People living in the district have been actively involved in the implementation of zero waste management; they have been sorting their waste themselves and taking it to recycling centers. Inspired by the effective use of zero waste management in Kamikatsu, Turkey will also take its first steps to form a similar area that might encourage more people to be part of the project.