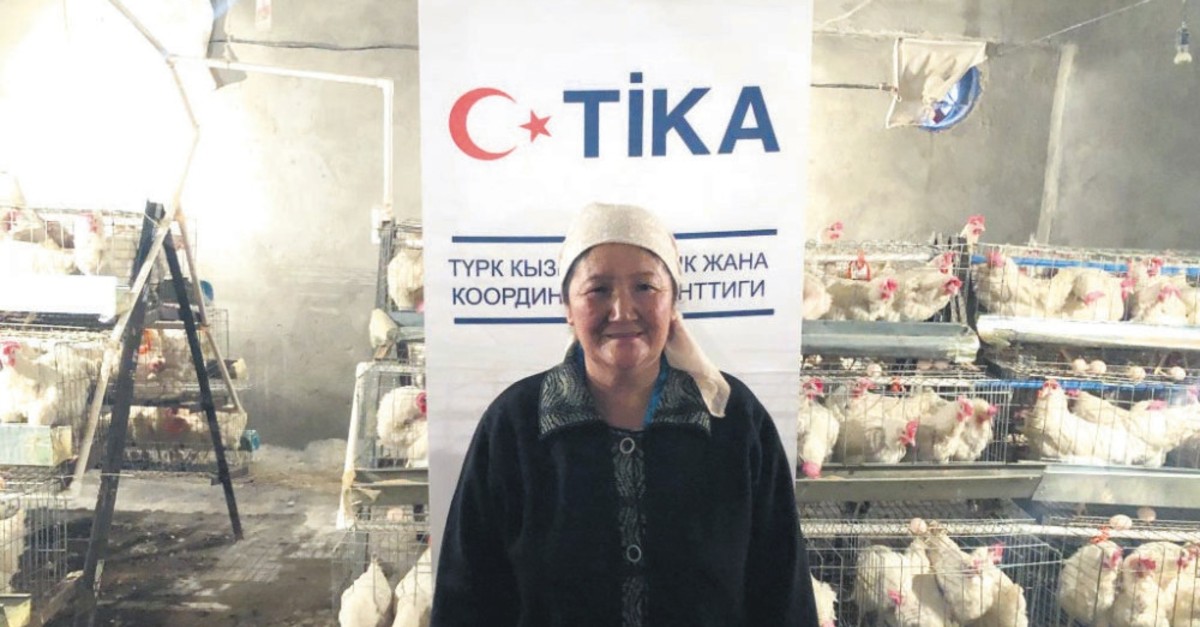 Suyunbubu Asankulova, a Kyrgyz woman, benefited from Tu0130KA's support for her poultry farm that helped her to expand the business.
by Daily Sabah Mar 09, 2019 12:19 am

The Turkish Cooperation and Coordination Agency (TİKA), is the state-run body that oversees the country's international development aid efforts to empower women from Central Asia to Africa, from the Balkans to South America. Through a string of projects, the agency aims to boost female employment and women's socioeconomic status, especially in countries and communities in need of humanitarian assistance.

In Mexico, for instance, the agency launched a pizzeria and bakery shop in Iztapalapa to help women from low-income households find employment. The venue in Iztapalapa's Leyes de Reforma quarter, is also home to a workshop where 61 women were trained by a local university in bakery courses and informed about human rights and social gender equality. Elsewhere, TİKA furnished the Turkmen Women's Union in the Mosul, Iraqi, which was dealing with a siege by the terrorist group Daesh, with sewing machines, office equipment and other materials.

In Bosnia-Herzegovina, the aid agency has projects to reduce unemployment; one of them is Cooperation of Women Entrepreneurs. The agency last supplied materials for a sewing workshop in the city of Visoko to a cooperative of women. The furnished workshop is now staffed by 20 women.

The agency also helped women in Kyrgyzstan to find employment. Across the Central Asian country, women benefited from vocational training courses on entrepreneurship, computer literacy and sewing and were supported in setting up their own businesses. A mobile workshop that trained women to sew reached out to 110 women, and more than half found jobs after completing the courses. TİKA also funded female entrepreneurs who started up businesses in textile and agriculture. Also in Asia, the agency reached out to 1,000 ethnic Rohingya Muslim women from Myanmar and delivered kitchen utensils and clothes.

In Serbia, the agency funded the repairing of the Novi Pazar hospital, which is located in a city with a large Bosniak population. The old hospital, which opened in 1954, was renovated and reopened by Turkish first lady Emine Erdoğan in 2017. The hospital's maternal health ward, which serves some 300,000 patients every year, was completely renewed, and renovation is credited with a drop in newborn deaths. The agency also assisted in repairing and furnishing a maternal health hospital in the Republic of North Macedonia. The country, like Serbia, was fighting to decrease infant mortality. TİKA also provided training for maternal health care staff.

In Africa, where women struggle to find employment, TİKA launched a textile workshop for families with single parents.