Refugees restore the glory of Aleppo soap from Turkey 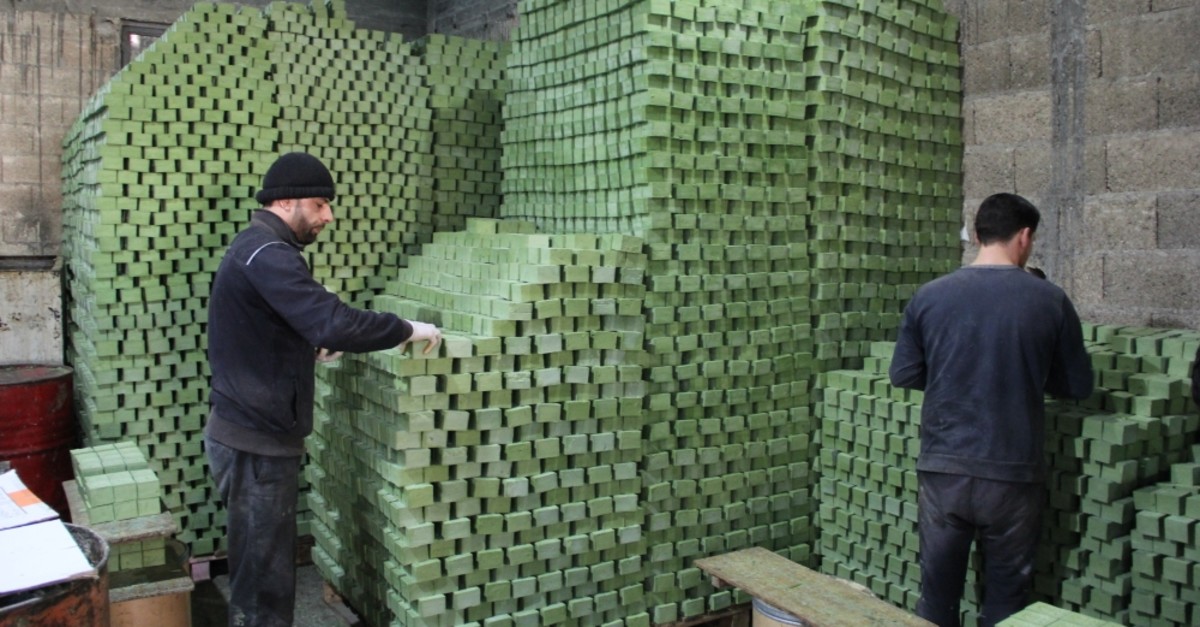 Two Syrian cousins who took shelter in Turkey after war erupted in their country are behind a refugee success story that saw them exporting Aleppo soap, a forgotten product of Syria, to eight countries

Vadah and Ahmed Tahan left Syria when the still ongoing war broke out in their country eight years ago. The two cousins who were soap makers back home, found success in the southern Turkish city of Gaziantep, where they took shelter, by producing Aleppo soap, a world-renowned Syrian product; today, they run a successful business, exporting their products to eight countries.

In a workshop in the city's Nizip district, the two entrepreneurs strive to keep a centuries-old family business alive. Production of Aleppo soap, dubbed the world's oldest, almost came to a halt due to the war. It takes months for a bar of soap to be ready for sale and can only be produced in the right climate conditions, which luckily, Gaziantep, sitting on the border with Syria, has. Vadah Tahan told Anadolu Agency (AA) that his family has been in the business for centuries, and he was happy to continue the business in Gaziantep. "We have been looking for a place good for production and came across Nizip, an important production hub for soaps made of olive oil. Nizip has readily available sources for ingredients like olive oil and laurel oil," he said. Since 2015, the cousins have produced Aleppo soap in Turkey, but it wasn't a smooth process at first. Speaking little Turkish, they had to learn the language for trade and to comply with Turkish commerce laws. Still, the cousins managed to adapt to the country in a few years."When we arrived in Nizip for the first time, many soap workshops were closed. Nizip was one of the main centers for soap production in the region, especially in the 1980s, but I believe a decline in the soap's quality led to closure of businesses. The workshop we have now, for instance, had been closed for about eight years when we rented it. Now, there are many Syrians like us who bought or rented defunct workshops and revived soap-making businesses here," he said.

The cousins already had a large clientele back in Syria, and they are pleased to find new ones in Turkey, noting high interest in their products. "Turkey gave us new opportunities, new customers. Thank God, we now export our soaps to Canada, France, Oman, Iraq, Libya, Saudi Arabia, United Arab Emirates and Japan. Turkish customers are also among our major buyers," Vadah said.

Ahmed is responsible for supervising multiple processes in the production, from drying and cutting bars to sealing them. "We use Turkish and Syrian production methods. The Turkish method is easier, but we mostly make them our way however difficult it is because we have to keep our traditions alive," he said. Ahmed said interest in soaps is largely due to their "organic" nature. "They don't contain any chemical additives at all," he said.

Ingredients are boiled in large vats before they are poured on the ground of a designated area in the workshop for drying. The drying process takes up to 24 hours and is followed by cutting the thick mixture into bars. Bars are then sealed and stacked before they are moved to a warehouse where they are stored for up to seven months for the "yellowing" process before they are ready for sale

.Syrian businesses flourished in Turkey after hundreds of thousands of people from war-torn country started fleeing to the country after the war erupted. Today, more than 7,200 businesses founded by Syrians operate in various industries including but not limited to textiles, manufacturing, trade, gastronomy, construction, real estate and tourism. In Gaziantep alone, 1,725 Syrian companies are registered with the local chamber of commerce.