Plastic bag use in steep decline after landmark regulation 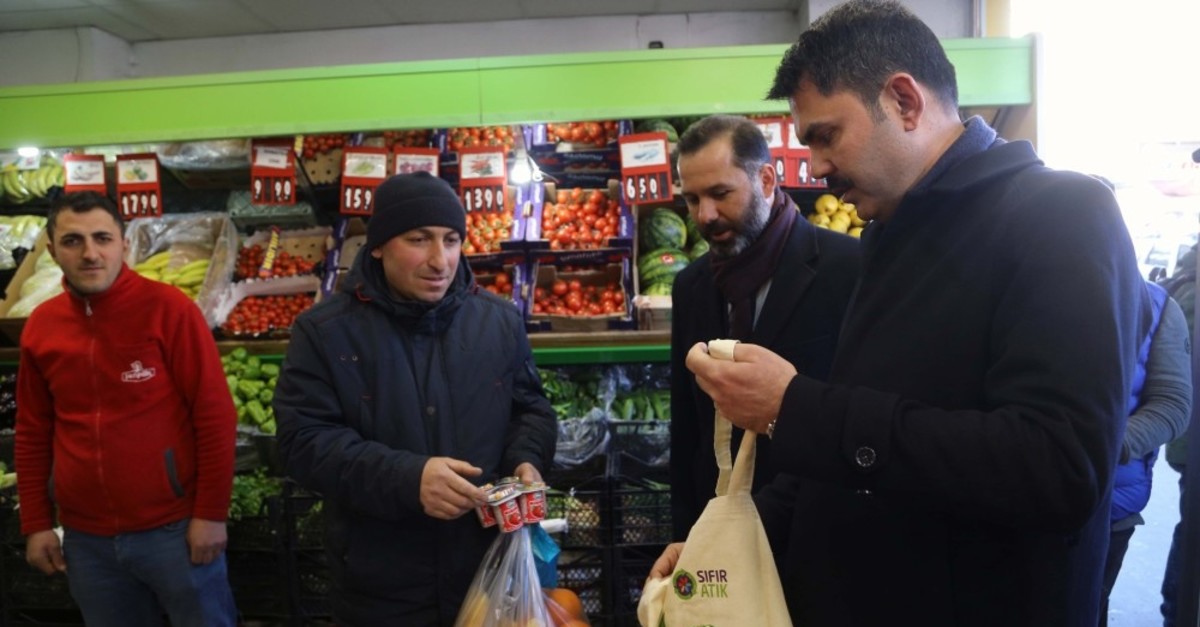 A regulation that introduced a fee on plastic bags at stores has helped decrease their use by 80 percent, officials say, as Turkey's fight against polluting waste gains momentum

Within three months since its introduction in January, a regulation on plastic bags made a tangible impact in Turkey. The government enacted the regulation that ordered customers to pay at least TL 0.25 for a plastic bag in shopping to curb the excessive use of those bags in the country's fight against plastic pollution.

Murat Kurum, Minister of Environment and Urbanization, told Anadolu Agency (AA) in an exclusive interview yesterday that use of plastic bags in supermarket chains decreased to about 80 percent. "Chains gave away 294 million bags last January and this number was 82 million in January 2019. Similarly, number of plastic bags distributed this February, dropped to 150 million from 605 million in the same month of 2018," Kurum said.

Plastic bag use per person is 440 annually in Turkey and about 30-35 billion plastic bags are used in the country yearly. An estimated 5 trillion plastic bags are used worldwide every year, and they mainly contribute to maritime pollution as some 8 million tons of plastic including bags are dumped into the ocean every year, killing marine life and entering the human food chain, according to a United Nations report on the issue.

The minister said plastic bags took up to 800 years to completely dissolve to a point where they would not pose a threat to environment, they also seriously damage nature and marine life, pointing out to recent discovery of 40 kilograms of plastic inside the carcass of a young whale washed ashore in the Philippines. Experts conducting an autopsy on the whale concluded that the animal died from starvation as it was unable to eat because of the trash filling its stomach. The minister said that the new regulation found nationwide support and they would expand it to other materials. "We will launch deposit bottle recycling regulations in 2021 and consumers will be able to exchange discarded bottles for products like chocolate, bus tickets or phone credits," he said.

Though low, the price on plastic bags has led consumers to seek other means to carry the goods they purchased, with some municipalities distributing free canvas bags for shoppers. A recent survey conducted by the Turkish e-commerce giant hepsiburada.com revealed that the demand in the market net bags increased by 154 percent.

Plastic bag restrictions are part of the larger "zero waste" project initiated two years ago by first lady Emine Erdoğan. Some 14,000 public institutions, from the presidential complex to ministries and their branches are integrated into the project which covers recycling of waste, sorting the waste at its source and recycling food waste to compost. The campaign helped Turkey to rediscover its potential to be a more eco-friendly country, despite heavy industrialization in recent years. The ensuing recycling drive saw zero waste collection areas set up in more places, from shopping malls to businesses, schools, hotels, airports, etc.

The drive saved more than 30 million trees between 2017 and 2018, with the recycling of more than 1.7 million tons of paper waste and cartons. Meanwhile, more cities are upgrading their waste management systems. The country also managed to recycle more than half of the plastic bottles in the market in one year. According to the last available data from 2017, of 236,000 tons of plastic bottles sold in 2017, approximately 140,000 tons were recycled. Under a new draft bill, every business or public institution will be required to receive a zero waste certificate that will evaluate how it complies with the new policies. The bill also makes it mandatory for municipalities to set up facilities for the collection of waste separated at its source. For large cities, garbage disposal units to store recyclable materials will be placed every 400 meters, and mobile units will be placed in neighborhoods to pick up recyclable waste. Municipalities will also be required to inform the public on how to separate recyclable waste and where to dump it.

Turkey also seeks to spread compost-making equipment to convert food waste into compost for home use.