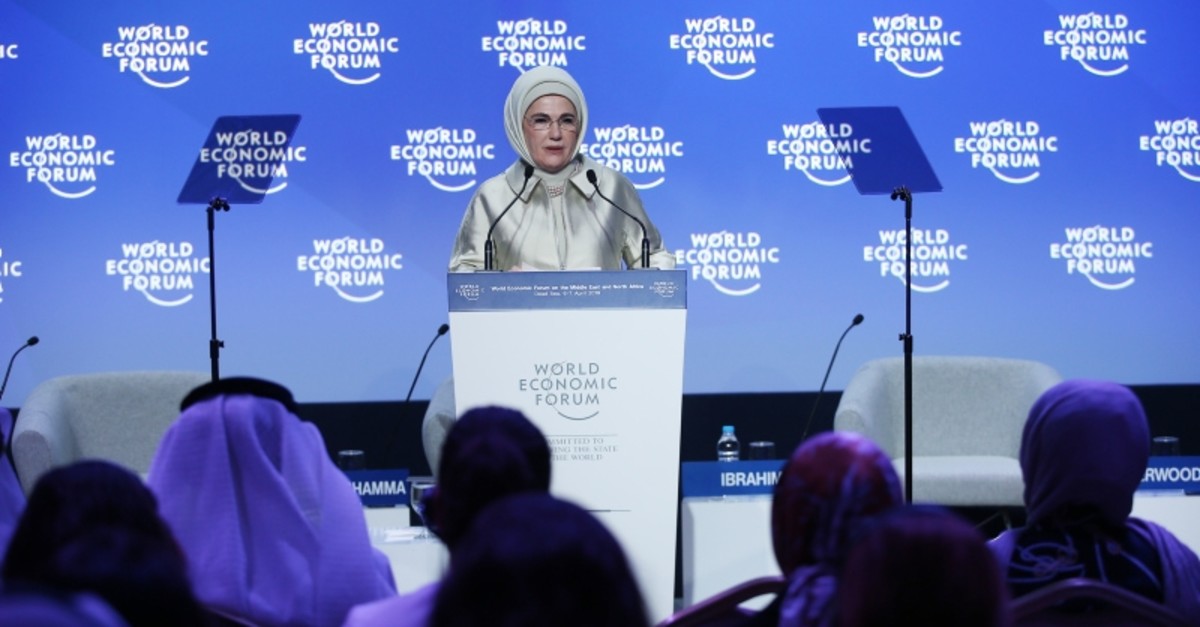 Building an environment-friendly economy is possible by including humanitarian values in industry, production and technology, Turkey's First Lady Emine Erdoğan said on Saturday.

Speaking at a panel held as part of the World Economic Forum's (WEF) Middle East and North Africa regional meeting in Jordan's Dead Sea, she underlined the world has to give up disposable products and prevent waste.

"Based on this fact, we have launched an environmental mobilization in Turkey," she said.

She added: "We sort waste at its source and recycle through the zero-waste project carried out under my patronage. We are trying to form a new culture of life."

Turkey's zero-waste project, led by the first lady, is marked in the Environmental Performance Review Report of the Organization for Economic Co-operation and Development (OECD).

The first lady noted that in 15 months some 15,000 enterprises adopted the project.

She also said Turkey started charging money for plastic bags in all supermarkets for reducing plastic use.

"At the end of the first month, the use of plastic bags went down by 70 percent in our country," she said.

Erdoğan stressed Turkey targets to raise its recycling rate to 60 percent by 2030.

"Our goal is to achieve savings that equal the yearly water and electricity consumption of a vast metropolis such as Istanbul," she added.

Touching on packaged foods, she asserted that this kind of foods cause health diseases.

"The cost of consuming packaged foods is high both for our bodies and the environment," she underlined.

Following the panel, Erdoğan, who is accompanied by Ministry of Environment and Urbanism Minister Murat Kurum during her trip, had a meeting with WEF Chairman Borge Brende and General Manager Klaus Schwab.

The meeting covered raising awareness on environmental protection as well as joint work on the international scale. Accordingly, Brende informed on Erdoğan about their new projects and voiced WEF's desire to carry out joint work with Turkey.

Both parties stressed the importance Brende's visit to Turkey on April 24 and 25 and cooperation with Turkey's Ministry of Environment and Urbanism.

Following the meeting, Erdoğan attended the lunch hosted by Queen Rania Al-Abdullah for her honor and visited the Amman Citadel.