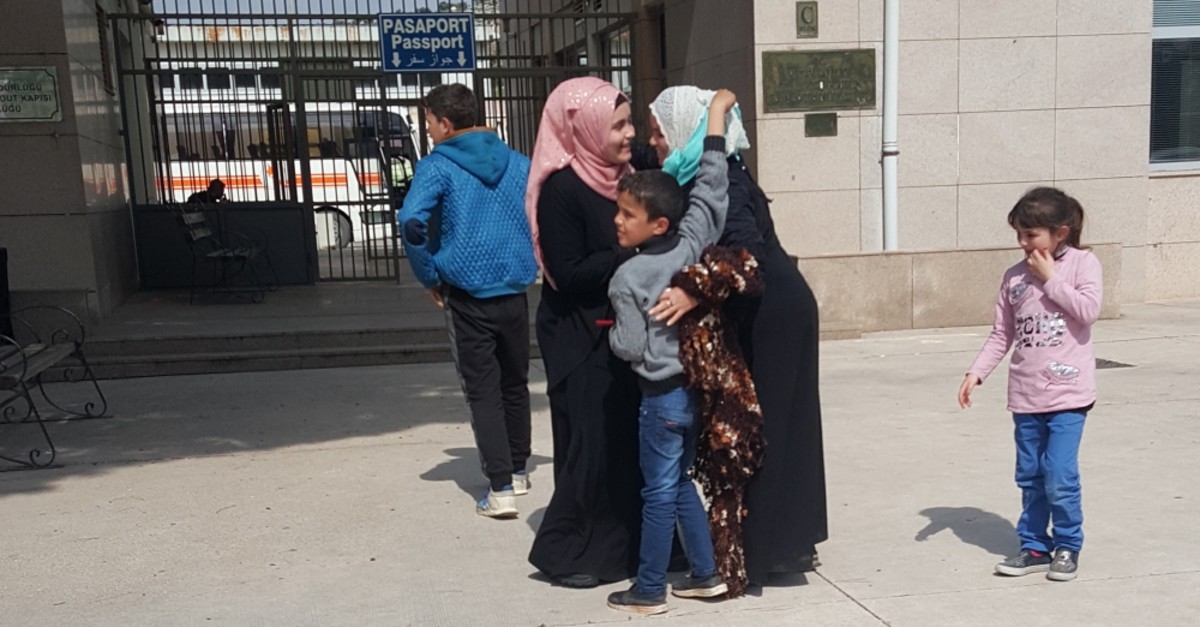 Fatima Badawi hugs her children after being reunited with them at the Cilvegu00f6zu00fc border crossing between Turkey and Syria, three years after they were separated, April 10, 2019.
by Daily Sabah with AA Apr 11, 2019 12:07 am

Separation from their families is a fate worse than death for the people of war-torn Syria. A Turkish charity helps families and children lost amid the turmoil reunite by working in Syria and Turkey

The Orphan Foundation, based in Istanbul, is a non-profit focusing on aiding children orphaned in conflicts and disasters, but their new initiative aims to stop Syrian children being forced to accept their fate without knowing the whereabouts of their parents. Reaching out to children seeking their parents and parents without a clue about the location of their children amid the ongoing chaos of civil war, the foundation brings them together. In the last month, the foundation helped nine children reunite with their families.

The initiative started when aid workers seeking to assist orphans in Syria and Turkey found that some children may not be orphaned at all. They simply did not know whether their father or mother was killed in regime forces' attacks or managed to get out of Syria alive. Some hadn't seen their parents for years. Çetin Aldemir, a social services expert working for the foundation says nine children they helped reunite with their families had to flee to Turkey alone or with relatives. "Last week, we managed to reunite five children with their families again. Their fathers were incarcerated in prisons run by [Assad forces] and their mothers were somewhere else in Syria. They could not communicate for a long time. We contacted Turkish officials to locate their mothers and receive permission for their reunion," he said.

According to Aldemir, it was like finding a needle in a haystack but, "It pays off once you see a mother hugging her children. It is a genuine joy to help people trusting you to find their parents." "Sometimes, it is only a vague description of parents, a sketchy direction to a spot where they lost each other is all we have," he said about the difficulties they faced in locating the parents. Still, they managed to find "a large number" of parents in the past eight months thanks to coordination with authorities and a good assessment of children's accounts of their life with their families in Syria. Fatima Badawi is among the mothers reunited with her children thanks to the initiative. Badawi met them at a border crossing between Turkey and Syria three years after the war separated the family. She is at a loss for words and said she was grateful to the foundation and Turkish officials for their assistance.

Iraqi family returns homeTurkish charities also work to reunite people with their homeland such as an Iraqi mother and her three children. Um Muhammad, who fled Daesh violence in Syria, returned to her homeland as part of humanitarian diplomacy work by an Istanbul-based nongovernmental organization. The Humanitarian Relief Foundation (İHH) helped the family return to their home in Iraq in a joint effort with the Turkish Foreign Ministry and the Iraqi Embassy.

The father of the children was killed in an airstrike in Syria after they fled from Daesh-held Mosul in northern Iraq. After their father's death, the family was forced to move to the Adbulhamid refugee camp in Idlib in northwestern Syria, where the mother remarried. As the children suffered violence by their stepfather, the Turkish charity intervened to provide help. The charity quickly got in touch with Iraqi authorities to help the family return to Iraq as part of their humanitarian diplomacy work.

Speaking to Anadolu Agency (AA), Abdullah Altay, coordinator of the charity's humanitarian diplomacy unit, said the family's return was "an urgent step that was successfully taken by the joint humanitarian diplomatic efforts of Turkish and Iraqi government officials together with İHH." Altay said that this reunion will "give these children their future back as they will reunite with their loved ones."

Msbah Alqaysi, the representative of the Iraqi Embassy's immigration department, said the family would be received with open arms by Iraq. "As we learned that the children were tortured by their stepfather, we demanded that they return to their country," Alqaysi said.

Um Muhammad said she was grateful for the support she received to reunite with her family in Iraq. "When my children faced violence by their stepfather, I broke up with him. Officials reached out to us. With their help, we will reunite with our family and home in Iraq," she said. The mother also thanked the Turkish Foreign Ministry and the Iraqi government for their support.

After Daesh terrorists took over one-third of Iraqi territory in 2014, millions were forced to flee mass destruction in regions such as Mosul, Anbar and Saladin. Damage and destruction occurred in thousands of settlements as well as the Mosul Airport, Mosul University, most railway stations and bridges and hospitals in the old city of Mosul.

To date, humanitarian diplomatic efforts by Turkey, Iraq and the charities have facilitated the return of 7,000 Iraqis from Syria.