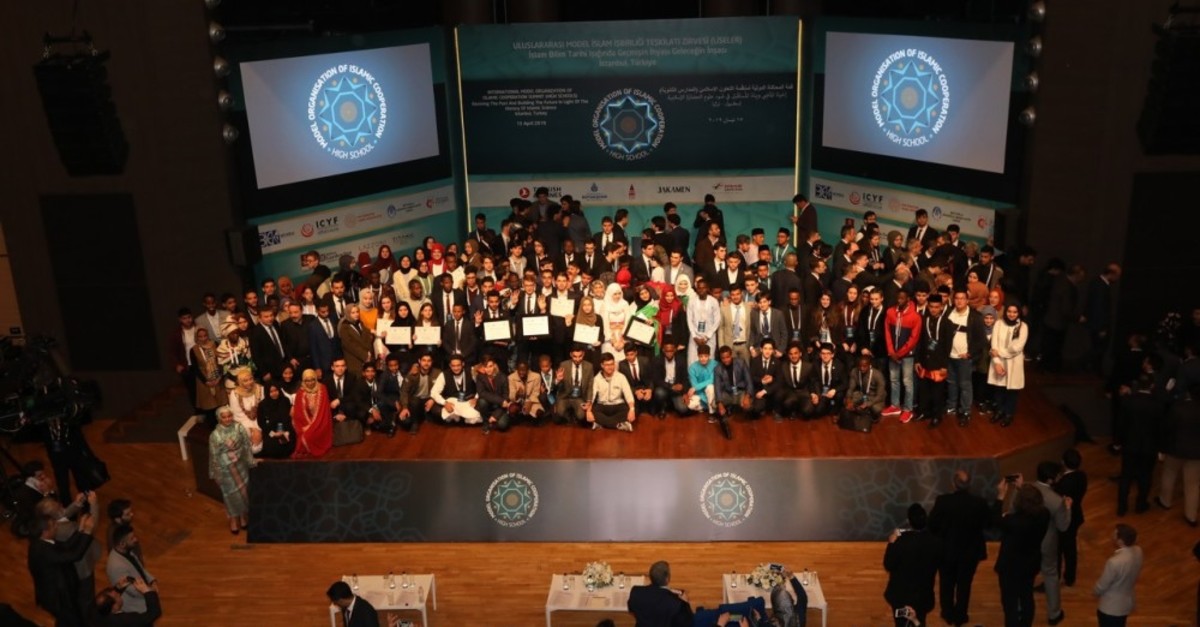 Students hailing from 56 member countries of the Organisation of Islamic Cooperation (OIC) got together in Istanbul for a weeklong summit that ended Monday. The Model OIC event gave students a platform to air their opinions in an atmosphere very much similar to the high-level OIC events.

Organized by the international body's youth branch and the Ministry of National Education, the event, which was held at Beyoğlu Anadolu Imam-Hatip School in Istanbul, touched upon challenges the Muslim world is facing as well as the past and future of the Islamic world. Some 224 delegates from Turkey were among hundreds who joined the summit. The event aims to help students sharpen their conflict resolution skills, analytical thinking and gives them a platform to meet their peers from around the world while learning about how diplomacy works.

In its second annual edition this year, Model OIC looks to raise awareness among the youth about the problems faced by Muslim countries, encouraging them to come up with solutions. Speakers debated in Arabic and English in this diplomatic simulation that was divided into panels that included topics like the fight against human rights violations, giving better participation opportunities for youth, social and economic development and establishing a common market by using Islamic financial tools.

Addressing the event yesterday, Bilal Erdoğan, acting chairman of the Knowledge Dissemination Foundation, a Turkish charity catering to students, touched upon the independence of Jerusalem, one of the motives for the establishment of the OIC, but said the world was still far from this expected independence.

"Member states failed to follow up this motivation and to be an ummah, united. Jerusalem will remain shackled unless we cannot achieve this ideal or work hard to achieve this unity. The rights of Muslims will remain suppressed unless we are united. Thus, this event is important to achieve unity and to instill the youth convened here the original ideals of the OIC. We need new perspectives, we need dynamism of the youth needed in the Islamic world," Bilal Erdoğan said.

Minister of Education Ziya Selçuk said at the event that the summit was a good platform to train the diplomats of the future. "The world needs a new language in the face of crises. We need a new understanding," he said. The OIC is the second-largest intergovernmental organization after the United Nations, but it remained low-key for years due to divisions between members. The model OIC was first launched in Istanbul last year as an authentic model of the original OIC summits and the council of foreign ministers as well as other committees existing in the international body.

Students act as ambassadors, ministers or heads of state of OIC member countries and discuss a wide range of issues echoing the OIC agenda. They draft resolutions, issue declarations and plot strategies while negotiating with their peers from around the world. They also attend heated debates to resolve conflicts between members.