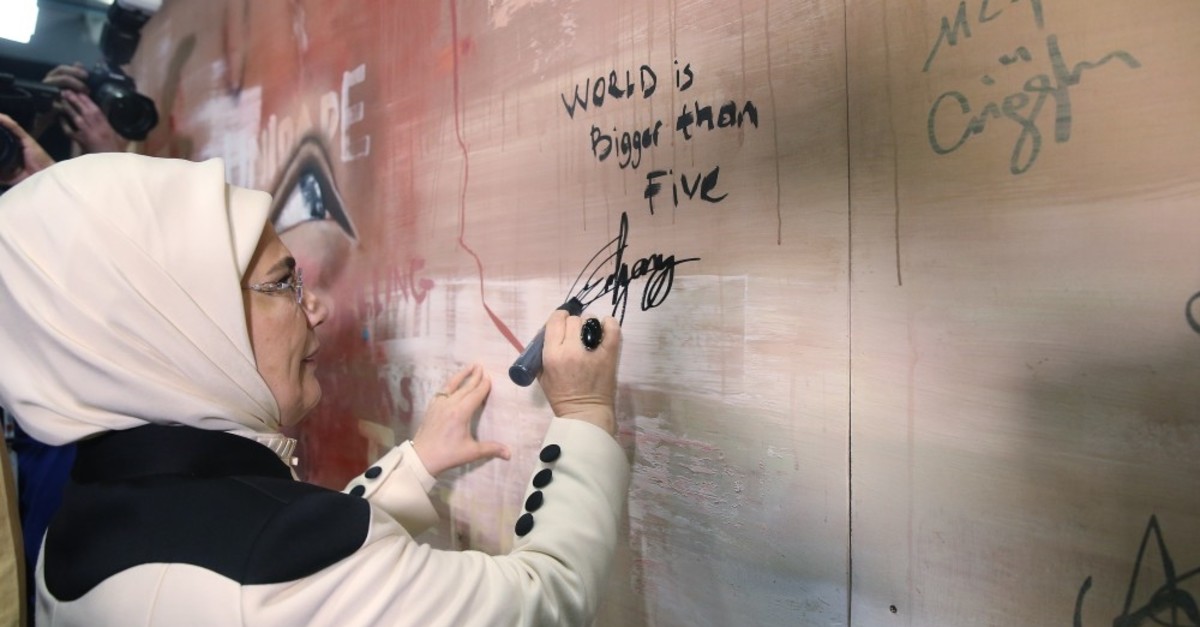 Emine Erdou011fan writes ,World Is Bigger Than Five, on a wall where participants sign at an event on the sidelines of the forum.
by Daily Sabah Apr 18, 2019 12:13 am

First lady Emine Erdoğan received the Changemaker award from the World Humanitarian Forum Wednesday for her inspiring work in the field.

Erdoğan joined leading philanthropists, representatives of nonprofits and other guests for the awards ceremony in London.

"I accept this award on behalf of the generous Turkish nation whose hearts ache when they see a child in tears and who regard a foreigner as God's guest and not with suspicion. I take great pride in the fact that my country is remembered with the egalitarian and inclusive approach it adopted in dressing the wounds of the world," Erdoğan said.

"I thank the World Humanitarian Forum for their appreciation of our humanitarian relief efforts without any discrimination based on religion, language or race. Unfortunately, history is full of wars, disasters, tears and blood. Ever since humans came into existence, not enough importance has been given to lives per square meter occupied by humans," she added.

"While some parts of the world are thirsty for peace, trust and stability, the other half does not even realize that it is humanity that is falling off the face of the earth. The world we live in is going through major humanitarian crises unfortunately, despite the claims of development and civilization of the 21st century. Against such a background, our duty as individuals and society is to choose to side with good or evil. As Turkish society, we consider the sky as a single roof under which humanity lives as a large family. We believe in the teaching of Rumi that a candle loses none of its light by lighting another. We believe that a smile on the face of a child is the greatest treasure in this world," she said.

The first lady, like her husband President Recep Tayyip Erdoğan, has been lauded for giving a voice to the oppressed and championing an open-door policy for refugees. She was behind a convention of spouses of leaders from the Arab world and Western countries in Istanbul which called for a stop to Israel's attacks against Gaza in 2009 and for lifting the Israeli blockade on the Palestinian territories.

Erdoğan also launched a campaign to mobilize international charities for millions of people affected by one of the worst floods to hit Pakistan in 2010.

The first lady also led a Turkish delegation to Myanmar in 2012 to the region where ethnic Rohingya Muslims lived, despite security warnings, and delivered humanitarian aid to the community while raising awareness for the plight of Muslims displaced due to ethnic violence. She also led another humanitarian delegation in 2017; this time to Bangladesh, where Rohingya Muslims had taken shelter.