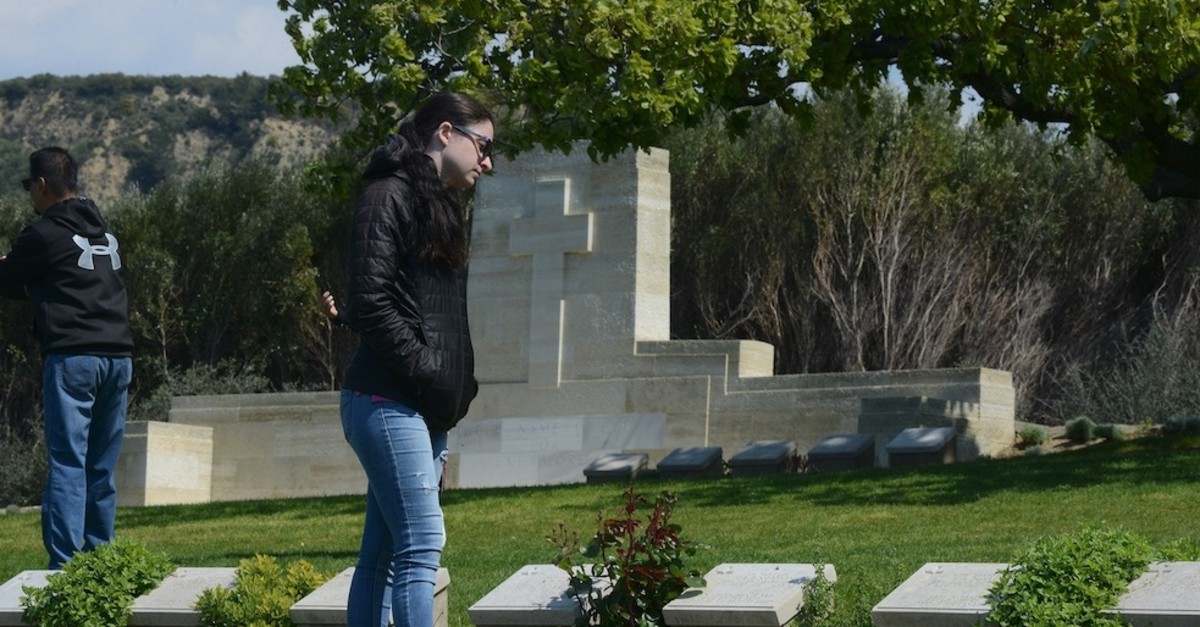 British, Australian and New Zealander descendants of Anzac troops have come to u00c7anakkale to commemorate the battle of their ancestors in events today and tomorrow on the Gallipoli Peninsula.
by Anadolu Agency Apr 24, 2019 12:14 am

Preparations on the historic Gallipoli peninsula for the 104th anniversary of the Çanakkale Land Battles are complete. International commemoration ceremonies will be held April 24-25 within the context of friendship and peace.

While British, Australian and New Zealand "Anzac descendants" will travel to Çanakkale to commemorate their ancestors on the 104th anniversary of the battle, nearly 3,000 Mevlevis, followers of 13th-century Sufi mystic Rumi, also known as Mevlana and Jalal ad-Din ar-Rumi, also came from the four corners of Turkey for their special commemoration program.

The Anzac descendants visited the memorials for soldiers and their graves before the ceremony that will be organized on April 24-25 on the Gallipoli peninsula.

They also visited Kabatepe, Arıburnu Cemetery, the battlefield and the field of the Anzac invasion, accompanied by guides. Examining the epitaph next to Arıburnu Cemetery and on which Atatürk's sentiments dedicated to the Anzac descendants in 1934 are written, they also saw the Lone Pine Memorial in the region of Kanlı Sırt, Chunuk Bair and the 57th Regiment Cemetery in Gallipoli. Australian Travis Wood, 35, who came to visit the place where his ancestors fought 104 years ago, said it was an emotional experience being on this land. Noting that everything is so nice after 104 years, he stated, "It is so good to see that the region is being prepared for friendship and peace."

He explained that he was deeply affected by the words of Atatürk on the Arıburnu memorial. "This is a very quiet, peaceful and beautiful snuggery. After the nine-month bad war, this is a very nice place today," Wood said.

Message of unity from Mevlevi

Almost 3,000 mystics of the Mevlevi order came from the four corners of Turkey to Gallipoli, where one of the bloodiest battles in history took place, and presented messages of unity and togetherness from the 57th Regiment Cemetery. They attended the "Mevlevi Procession" program organized by the Sufism Foundation and Çanakkale Onsekiz Mart University Sufism Community in memory of fallen soldiers with their local clothes.

The Mevlevis, who wore military, efe and whirling dervish clothes, formed a cortege near Çataldere Cemetery on the Gelibolu peninsula and marched up to the 57th Regiment Cemetery. In the cemetery, they prayed under the leadership of Mevlevi Master Mustafa Özbağ and recited messages of unity and togetherness from the "land of martyrs."

Speaking to Anadolu Agency (AA), Özbağ said they organized the "Mevlevi Procession" for the eighth time. "We hold this event to remember martyrs by visiting these lands soaked in our ancestors' blood once a year and to keep Çanakkale on the agenda, to transfer it to future generations."

Stressing that they stand against traitors at home and abroad, Özbağ continued: "There are people from all corners of Anatolia. I wanted them all to come in their local attire. We wanted to present an answer to those who want to divide us and set us at odds. Every year, we meet at the 57th Regiment Cemetery. The soldiers here are all martyred. Therefore, the 57th Regiment gained ground in our hearts. We are the sentimental soldiers of the 57th Regiment. We will continue from where they left off."

Abdullah Ertaş, who attended to the commemorative ceremonies from Çanakkale, also said that this program is very important for them and remarked: "We respect this event that shows the world that the owners of this country are the children who are pure at heart. Our ancestors sacrificed everything 100 years ago. The reason why we hold such an event is to show that we are ready to do the same." Ömer Faruk Bayraktar from Istanbul asserted that he has been coming to the 57th Cemetery for three years. He reported: "It is not possible to feel and express the spiritual atmosphere of this place. May God not let this nation experience the Çanakkale Battle again."