Prophet Muhammad's cloak back on display for Ramadan tradition 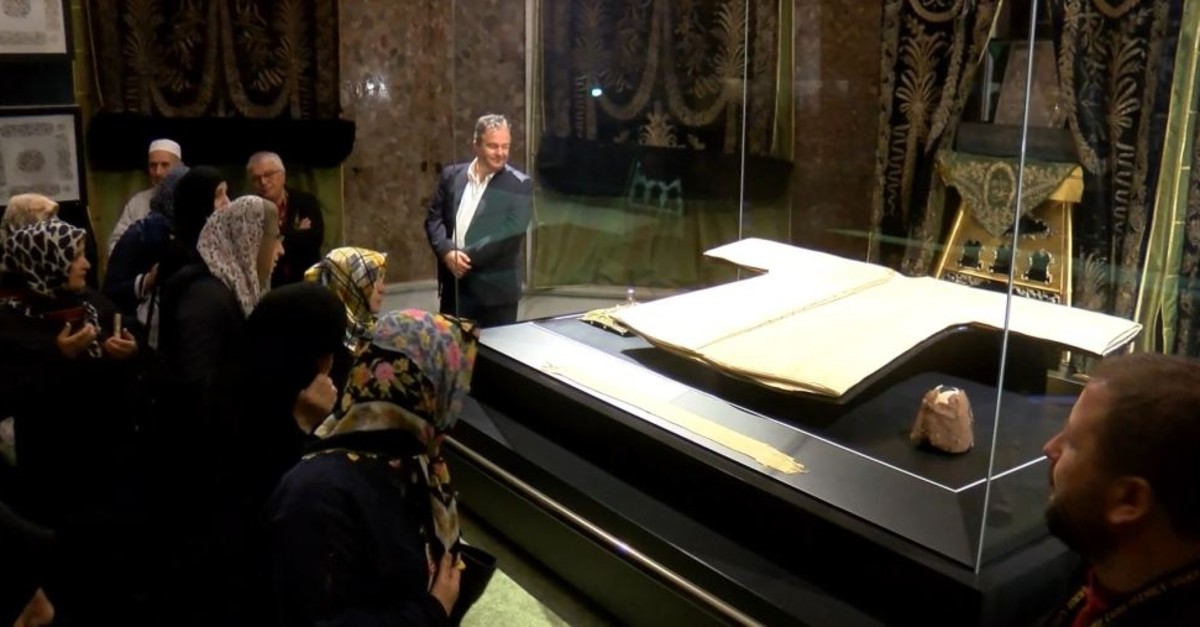 An ancient cloak worn by the Prophet Muhammad went on display Friday to mark the occasion of the Islamic holy month of Ramadan. The Hırka-i Şerif, or the Holy Cloak, which is made of linen, cotton and silk, was worn by the Prophet Muhammad and brought to Istanbul during the reign of Ottoman Sultan Ahmet I in the 17th century at a time when the Ottoman Empire controlled much of the Islamic world, deep into today's Saudi Arabia.

Every year during Ramadan, the cloak is put on special display at the Hirka-i Serif Mosque in Istanbul, attracting hundreds of thousands of visitors.

The sacred relic's exhibition opens on the first Friday of every Ramadan in the mosque located in the city's Fatih district and remains on display until the end of the month. The cloak had been entrusted to Uwais al-Qarni, who went to Medina to see the Prophet Muhammad in the seventh century but had to return to Yemen due to his mother's illness without seeing the prophet. Impressed by the story, the prophet presented his cloak to al-Qarni via companions and he received the garment in Yemen. Al-Qarni had no children and the relic was passed down to his brother and is still under the protection of the same family. The Al-Qarni family lived in southern Anatolia for centuries; however, they later migrated to Kuşadası in the Aegean region. In the 17th century, Ottoman Sultan Ahmet I asked them to bring the holy relic to Istanbul where other holy relics of Islam were being preserved. After the cloak was taken to Istanbul, two keys were made, one for the sultan and one for the Al-Qarni family, for the locked box that the cloak was displayed in.

Istanbul hosts most of its holy relics at Topkapı Palace since Sultan Selim's conquest of Egypt in the 16th century, where he seized items of the prophet then in the custody of the Mamluk caliphate, along with the control of the global caliphate of the Muslims. Among them is a battle standard from the prophetic era, a tooth of the prophet and hair from the prophet's beard as well as his sandals and a bowl he used.

A ceremony was held for opening the cloak to public display. Local officials and Barış Samir, a descendant of Uwais al-Qarni, attended a formal opening ceremony marked with the recitation of verses from the Quran. There were long lines of Muslims outside the mosque eager to see the cloak, which will be open for display between 10 a.m. and 6 p.m. on weekdays and 9 a.m. to 6 p.m. on Saturday and Sunday. The mosque is also included in a public bus route allocated for Ramadan only.