Ramadan aid in Djibouti reaches out to Yemeni refugees 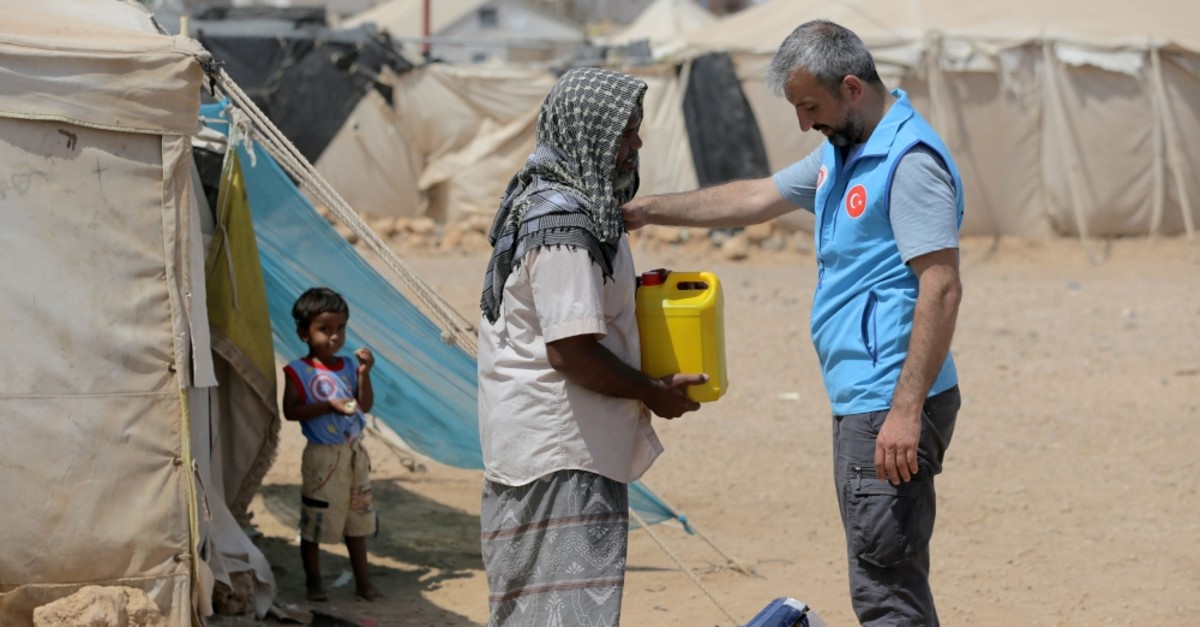 Workers from TDV handed out food packages to a man at the Obocok refugee camp on Friday.
by Daily Sabah with Agencies May 11, 2019 12:03 am

Turkish charities' efforts to reach those in need culminate in Ramadan, a Muslim holy month where the faithful ought to help the needy. A charity linked to the country's top religious authority was among those delivering aid to impoverished families in Djibouti. Turkey's Diyanet Foundation (TDV) delivered food to 800 families living in the capital city of Djibouti and the town of Obock, where refugee camps for displaced Yemenis are located.

The foundation delivered 400 food packages to refugees in Obock and served iftar, the meal to break the daily fast in Ramadan, to 1,000 people in the refugee camps.

As it does with other African countries, Turkey pursues closer relations with Djibouti, a Horn of Africa nation that lies in a strategic location. Apart from humanitarian campaigns, TDV is behind the planned construction of a large mosque in the country. Turkish Coordination and Cooperation Agency (TİKA), meanwhile, plans to build a hospital in the country.

Djibouti hosts more than 27,000 refugees and asylum-seekers, mostly from Ethiopia, Eritrea, Somalia and, more recently, from Yemen. The country, the closest access point to the Arabian Peninsula from Africa for migrants, has seen a flow of Yemeni refugees since the conflict in that country escalated. Obock hosts at least 1,500 refugees. Yemen has been wracked by violence since 2014 when the Shiite Houthi group overran much of the country. The crisis escalated in 2015 when the Saudi-led coalition launched a devastating air campaign aimed at rolling back Houthi gains. Saudi Arabia and its Sunni allies accuse the Houthis of acting as a proxy force for Shiite Iran. Turkey is among the biggest donors sending humanitarian aid to the crisis-stricken country. Tens of thousands of people, including civilians, are believed to have been killed and the U.N. estimates 14 million Yemenis are at risk of famine.

Other Turkish charities also launched humanitarian campaigns during the month of Ramadan. The Federation of Associations That Value Humanity (İDDEF), for its part, will reach out to the needy in 33 countries from Africa to the Balkans. The Istanbul-based charity will both hand out fitr and zakat from donors to the poor and host iftar dinners in Kosovo, Burkina Faso, Guinea, Mexico, Kyrgyzstan and the Philippines. The International Cooperation and Aid Association will host iftar dinners and suhoor meals (the meal before the start of the daily fast) in two soup kitchens in Ethiopia and deliver packages with food for one month to 1,920 families in the country. The Humanitarian Aid Foundation aims to reach out to 3 million people in 120 countries throughout Ramadan. It will deliver food packages, clothes and cash for the impoverished households, the orphans and the displaced. The charity's campaign focuses on Syria, Sudan, Yemen, Palestine, Bangladesh, Iraq and Myanmar.

The Turkish Red Crescent, the country's most renowned humanitarian aid organization, is at the forefront of Turkey's aid endeavors around the world. It will reach out to about 15 million people in need in Turkey and other countries for humanitarian aid. It will operate in 39 locations in 37 countries for aid delivery. The charity will also host iftar dinners for about 1 million people across Turkey this Ramadan.