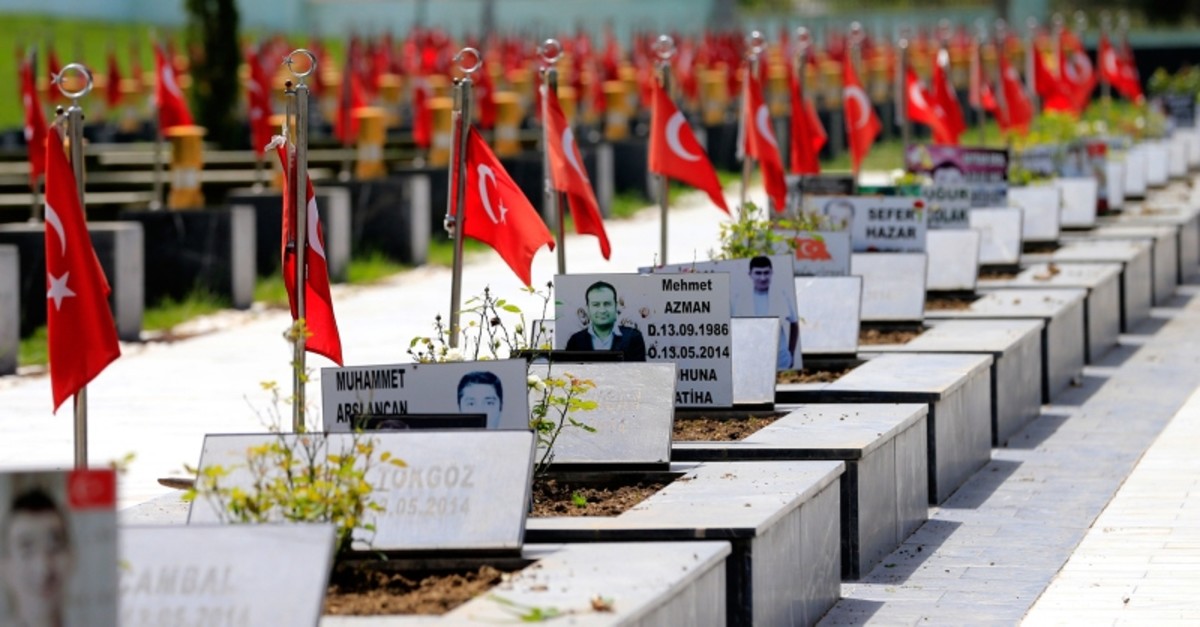 Grieving families flocked to the cemeteries of the loved ones they lost in a mining disaster that claimed lives of 301 miners in the town of Soma in western Manisa province, marking the fifth anniversary of the deadliest tragedy in Turkish mining history.

Revisiting the sorrow they were engulfed in five years ago, hundreds visited cemeteries on Monday, some quietly reciting the Quran and prayers, and some leaving flowers on graves decorated with Turkish flags. Children left drawings and letters for their late fathers.

Local officials and lawmakers also attended the official commemoration ceremony held at the graveyard constructed for the miners; each headstone and grave made out of black marble with a Davy lamp (miners' safety lamp) on top of it..

Other commemoration events were also held by the Manisa Metropolitan Municipality and Governor's Office, the Soma District Governor's Office, and the Soma Municipality. The Zonguldak branch of the Chamber of Mining engineers also held a commemorative event. People nationwide remembered those who perished in the disaster, organizing walks, observing a minute of silence or taking to social media to commemorate them.

On May 13, 2014, a fire broke out at a mine and the ensuing smoke killed at least 301 workers trapped dozens of meters below while hundreds of others managed to reach the exit. The incident was the deadliest tragedy in Turkish mining history, and preceded another disaster which claimed 18 lives in the central Turkish town of Ermenek in October 2014.

The disaster was a devastating blow to the small mining community of Soma, where almost every family has a member or relative working in coal mines, and paved the way for further measures for work safety after the mining company's executives were found complicit in neglecting safety measures.

14 people have been sentenced to jail over the accident.

Recently, a regional court ordered the release of Can Gürkan, the CEO of a mining company running a coal mine in western Turkey where the Soma disaster took place. The court also imposed a travel ban on Gürkan. The mine's managers remain jailed.

Gürkan was among the five defendants of the staff of the company, Soma Kömür İşletmeleri, which was accused of manslaughter by deliberate negligence after miners died of smoke inhalation following a fire in the mine.

Last year, a lower court in Izmir handed down prison terms ranging between 15 and 22 years for the defendants in the case. They were accused of neglecting worker safety in the mine after miners without enough equipment to protect them from smoke inhalation or sufficient fire exits were killed.