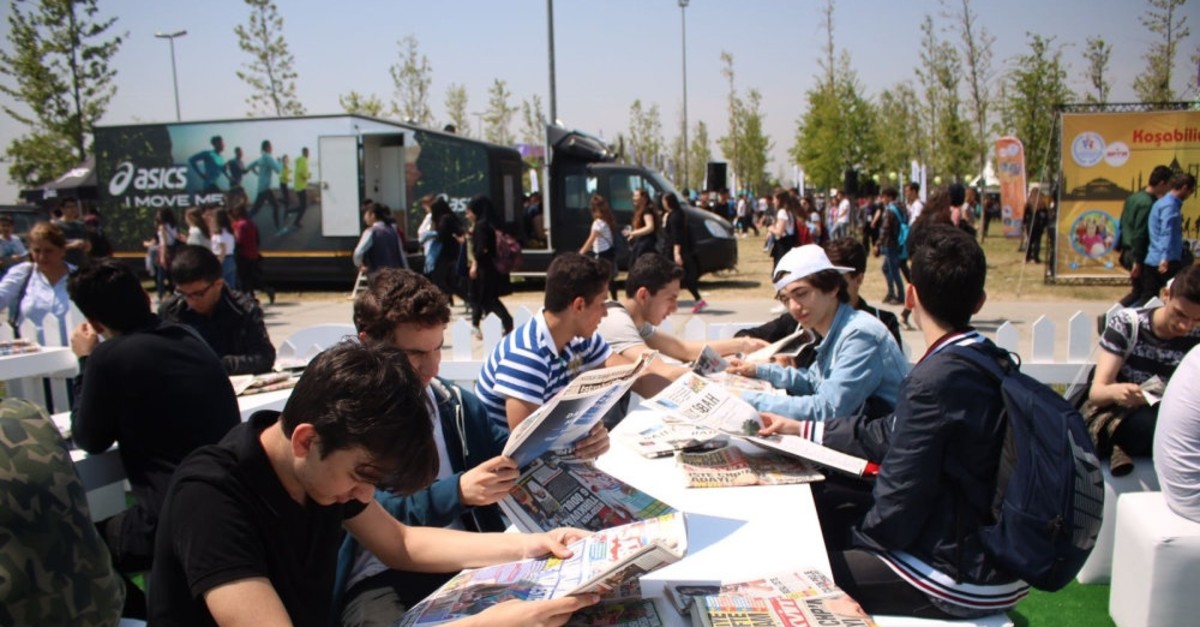 Young men and women reading newspapers on the sidelines of a youth festival in Istanbul in May 2018. The youth make up 15.8 percent of the population in Turkey.
by Daily Sabah May 17, 2019 12:06 am

Turkey marks Youth Week dedicated to the younger minority of an aging population. Official figures released on the occasion yesterday shows more than half of the youth population is happy with their lives and a majority of those employed love their jobs

Turkey has been a country traditionally priding itself on a young population but this trend has reversed in recent years. New statistics released yesterday on the occasion of the country's Youth Week, show the youth, or those between the ages of 15 and 24, make up only 15.8 percent of the population or roughly 12.9 million people.

Although their numbers keep shrinking, the youth is happy and love their jobs, figures by the Turkish Statistical Institute (TurkStat) point out.

More than half of the youth population are men, statistics also show. Hakkari has the highest proportion of the young people at 25.4 percent followed by Şırnak and Siirt in eastern Turkey like Hakkari. These three provinces also usually top the list in children as a portion of the population. The eastern provinces have traditionally been home to a population of extended, large families unlike the western cities where families tend to be small. Muğla in southwestern city, known for its popular coastal strip drawing tourists from around the world, had the lowest youth population at 12.8 percent followed with Balıkesir in western Turkey.

As for employment, the unemployment rate among the youth declined to 20.3 percent from 20.8 percent. However, figures show a substantial number of youth are neither at school or at work and this is higher for young women. More than half of the youth with a job work in the service sector, while 30 percent work in industry and the rest are employed in the agricultural sector. TurkStat figures show 76 percent of the youth are happy with their jobs while 48.7 percent among them declared that they were satisfied with what they earned.

Job satisfaction levels were higher among young men. The proportion of the youth between the ages of 18 and 24 who declared they were happy was more than 55 percent and young women were much happier compared to men. Having good health was the main source of happiness for the young and it was followed by success and love. For men, success is a secondary source of happiness while it is love that takes the backseat as a source of happiness. Both genders value health above all statistics show. Statistics also show that internet usage was 93 percent among the youth between the ages of 16 and 24, an increase compared to previous years.