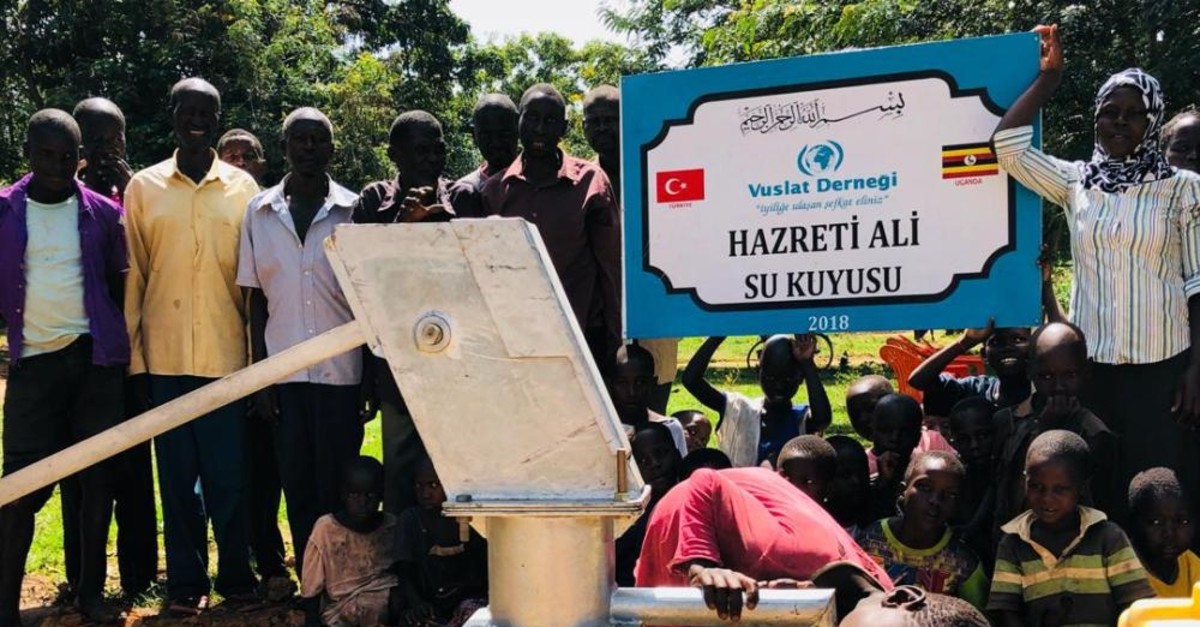 A child drinks from a water pump at a well drilled by the Turkish charity Vuslat, during its inauguration in 2018 in Uganda.
by Daily Sabah with Agencies
May 18, 2019 12:08 am

Turkey's helping hand to African and Asian countries embattled with drought and water shortages is embodied in water wells drilled by charities. A Turkish charity now plans to open 5,000 wells by 2020 on the two continents. The Vuslat Association already opened 700 water wells and says more are on the way. Cüneyt Süleymanoğlu, general coordinator for the charity, said donations they received turned into "a hope" for countries fighting drought. "There has been great interest from our donors. The cost of constructing a well starts at TL 5,000. In return for donations, we gave the name of donors to the wells," Süleymanoğlu said. Water wells built in central locations in villages save time for villagers and offer access to water for livestock in places where locals depend on livestock breeding for a living.

In a world where more than 2 billion people still lack access to clean water, Turkish charities have opened water wells all over Africa, Asia and the Middle East. Ten Turkish charities have established more than 8,800 water wells around the world so far. The Humanitarian Relief Foundation (İHH) opened more than 3,400 water wells in 30 countries, the Cansuyu Charity and Solidarity Organization opened more than 1,270 water wells in 13 countries; while the Yardımeli International Humanitarian Aid Agency opened more than 1,100 wells in seven countries, and the Hayrat Aid Foundation opened 872 wells in 17 countries. The Turkish Cooperation and Coordination Agency (TİKA) has put over 500 water wells into operation in five years and also realized several projects in Azerbaijan, Ecuador, Sudan, Cambodia, Niger and Tunisia, which support sustainable development and provide millions with water, along with water for fertile soil. The Turkish Red Crescent has completed six projects in Gaza, which will meet the water needs of 400,000 people, as part of the Gaza Strip Drinking Water Rehabilitation Project.

Water well projects focus on areas where there is no access to clean drinking water due to economic impossibilities, harsh climate conditions, water scarcity or a lack of ways to extract it. The wells made within the scope of the projects are powered by electrical and solar energy, while the water is pumped with electric pumps and people make use of the water through taps.

Wells are most needed in Africa, which is home to 11 percent of the world's water reserves though figures show water consumption per person is 10 liters in the continent. People in mostly rural areas have to travel up to 6 kilometers to access clean water. Apart from the usual health and hygiene problems, water shortages also create an indirect challenge to education. Children are often responsible for fetching water for their families and have to walk kilometers every day to find water in streams and ponds. The unclean water they fetch from these sources causes the spread of waterborne diseases.