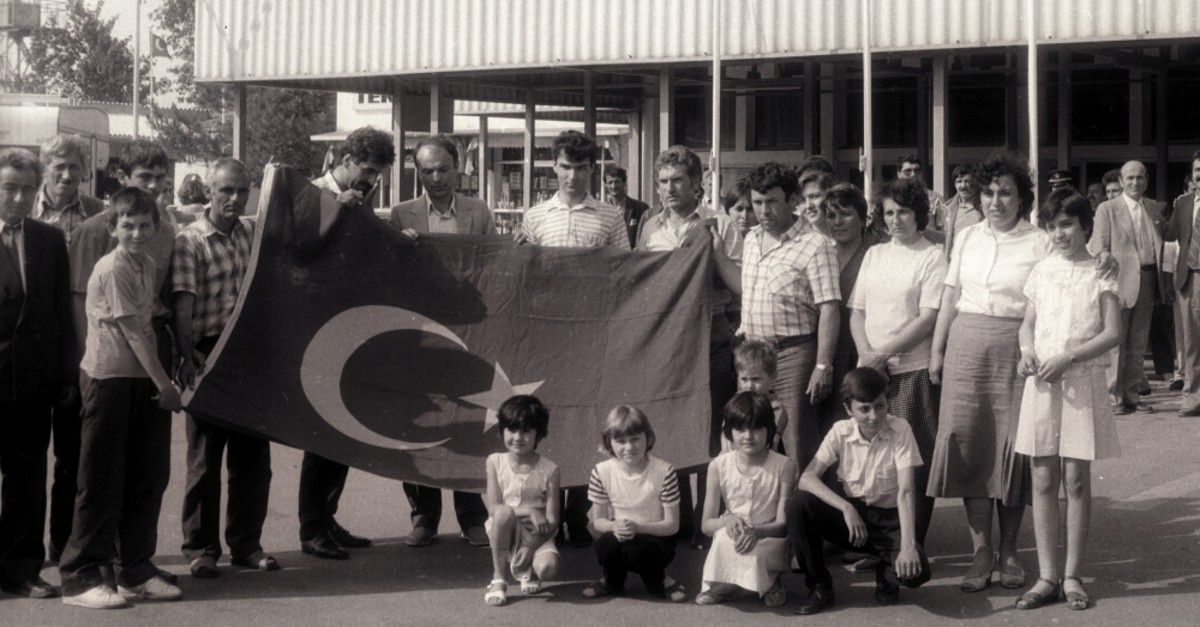 Turkish migrants from Bulgaria pose with a large Turkish flag after they arrive in Turkey through the u0130psala border crossing, June 6, 1989.
by Daily Sabah with AA May 25, 2019 12:31 am

It has been 30 years since Turks in Bulgaria were forced into an exodus due to an assimilation policy forcing them to change their names, along with their ethnic identity. Those who took shelter in Turkey remember the harsh years

Forced migration, exodus or ethnic purge, it has many names, but the Turks of Bulgaria still vividly remember their mass departure from their homeland to Turkey in the face of a severe assimilation campaign.

Forced to change their names and shed anything that could associate them with their ethnic identity, Turks who trace their history in the Balkan country to centuries of Ottoman rule, left for Turkey in the 1980s. Some 350,000 people came to Turkey amid a harsh campaign to erase their identity by the Bulgarian regime between 1984 and 1989. Many fought peacefully, but the regime never softened, culminating in a mass exodus in 1989. It was the largest migration of people in Europe after World War II.

Under dictator Todor Zhivkov, who ruled the country from 1954 to 1989, an assimilation campaign against the Turkish minority in the country sought to curb their rights under the pretext of creating a homogeneous country. It started in 1984 with orders for Turks to change their Turkish-sounding names to Bulgarian ones and continued with a ban from speaking Turkish in public. It wasn't limited to language and soon, mosques of the Turkish minority were closed by the communist dictatorship pursuing what it called a "Process of Revival." The community resisted through peaceful protests but increasing restrictions on their daily lives forced them to leave for neighboring Turkey where they were embraced by the government. The nation was angered by "Bulgarian cruelty to Turks," as newspaper headlines of the era reflected.

Taner Nizamoğlu is one of those who traveled to Turkey when he was still a teenager. Nizamoğlu, 47, who now lives in Istanbul's Avcılar district, said it actually started after the 1944 revolution that brought the communist regime to power. "They first gave some privileges to Turks so that they would side with the Communist Party. They were even promoting education in Turkish. It was all well until the 50s, the decade when the assimilation policies originally started," Nizamoğlu said. A Communist Party congress in 1956 was the scene of a debate over "one nation" that would put a homogeneous Bulgarian identity above anything else. A "Bulgarization" policy slowly emerged, and Turks were among those suffering most from a set of policies under different names. According to Nizamoğlu, for instance, women were forced to remove their headscarves under the "cultural revolution." "Children were banned from having circumcisions," he added, among other restrictions on the traditions and religion of the community. "Turks were not given equal rights with others. Those serving in the army wouldn't be promoted for example," he said.

The name-changing policy started with Pomaks, a Bulgarian Muslim community, which was followed by Roma. In 1984, Turks were subjected to mandatory name changes. In one year, all members of the community were forced to pick new, Bulgarian-sounding names. "I was named Albin," Nizamoğlu said. The assimilation campaign took a toll on the Nizamoğlu family. "My father was a teacher in our village, and he was among those who were fired from their jobs for opposing the name change. He was detained in 1989," Nizamoğlu remembered. On May 20, 1989, protests in Turkish villages faced crackdowns and increasing violence at the hands of the Bulgarian regime that forced many to flee to the border. This was what the regime sought, and when the borders were opened, thousands left for Turkey.

"THEY EVEN CHANGED THE NAMES OF THE DECEASED"

According to Galip Sertel, a journalist and writer, the regime first tried to convince Turks to give up their ethnic identity. "The official account was that the Turkish community actually consisted of Bulgarians who converted to Islam under Ottoman rule," he said. Sertel remembers marches in cities by Turks. "They wanted to have their Turkish names back, they wanted to speak in Turkish again and have Turkish classes at school. They wanted to be allowed to practice Islamic rituals. The state saw the marches as treason, and they let 'traitors' out by opening the border," Sertel said. Sertel, 77, said he was given the name Galin. "They even changed the names of deceased people. My late father Mehmet was now Mihail. They put this on his gravestone. My late grandfather Süleyman became Semion," Sertel recounted. Sertel's nationalism, his fight to keep his Turkish name, cost him a job at a newspaper, and he was barred from his other professions, including teaching. After the fall of the communist regime, Sertel engaged in politics to fight for the reinstatement of the Turkish community's rights before he joined his family and migrated to Turkey in 1990.

Efrahim Kamberoğlu, who runs the Balkan Turks Association based in Avcılar, Istanbul, said the campaign against Turks even extended to funerals. "They had to have Christian funerals. Everything was banned. You couldn't go to a mosque, couldn't speak Turkish and you couldn't listen to Turkish music. They'd impose heavy fines on anyone violating the ban," he recalled. Kamberoğlu, like others, migrated to Turkey and is grateful to then-Prime Minister Turgut Özal for admitting them. Özal championed the rights of Bulgaria's Turkish community and invited all 3.5 million Turks in Bulgaria to Turkey. "He was a great leader. He let us in," Kamberoğlu said. Unlike migrants from other countries, they were luckier, Kamberoğlu said. "Turkish migrants were educated. They were people with job experience. There were teachers and nurses among us. We could speak Turkish. So, it was easy for us to adapt to life here." Kamberoğlu himself was a professional wrestler for Bulgaria and won three European titles and went on to compete for Turkey once he migrated.

Arslan Şentürk was among about 1,000 migrants from Bulgaria who settled in Kırklareli near the Turkish-Bulgarian border 30 years ago. Şentürk, 59, remembers the days when even grade school students faced pressure from authorities to change their names. He resisted for a while, despite veiled threats from police officers that would occasionally visit him. Şentürk remembers the time when his wife, who had just given birth, was not allowed to leave the hospital for not giving a Slavic name to their children. He insisted on not changing his own name and lived as a fugitive for a while, as his ID was cancelled, and he was not allowed to have a residence permit unless he changed his name. Another time, he was caught speaking Turkish at work and forced to give up a fraction of his salary as a fine. "I was interrogated and fined almost every day just for being a Turk. I was depressed and had to quit my job," Şentürk recounted. Finally, he and his family traveled to Kırklareli where they settled in a tent city set up for migrants. Hüseyin Yılmaz, the same age as Şentürk, said it was very difficult for them in Bulgaria. "Nobody wants to leave his home, his land. I still dream of Bulgaria. I still dream of the places I lived, where I was born," he said. Yılmaz and his family were first forced to migrate to another city when they opposed changing their names. "My father was detained and sent to hard labor in Bulgarian villages. I was fined for speaking Turkish," he recounted. "We only opposed changing our names. We didn't have any other problem," he added.

Ahmet Karabekir, who settled in Kırklareli, was a teacher back in Bulgaria when he was detained twice for his outspoken opposition to the name change. "I was detained once for writing my Turkish name on my notebook," he remembered. Karabekir said people, especially in villages, faced oppression, and soldiers would randomly raid villages where people refused to change their names. "They used to storm houses and point guns at people. I remember a time when people in my village found out about an imminent raid, and the entire village fled into the forest to hide so that they wouldn't be forced to change their names," he said.