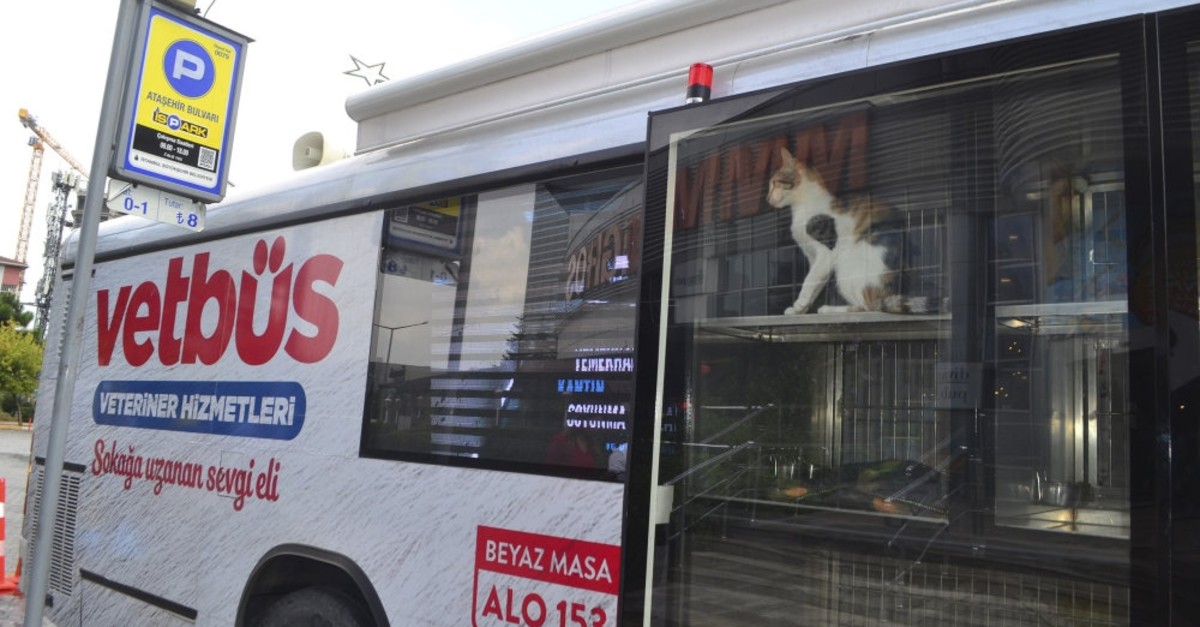 A cat staring from the window of Vetbus, a mobile veterinarian clinic of the Istanbul municipality. Municipalities tackle sterilization and care of stray animals but shelters get overwhelmed with the increasing number of cats and dogs.
by daily sabah May 29, 2019 12:14 am

Amid concerns over the well-being of animals as more crimes against them make headlines, a parliamentary committee on animal rights is pondering the establishment of a police department specialized in such crimes.

Mustafa Yel, head of the committee, said they would propose to the government a foundation of what he called "animal police" for rapid response in crimes against animals amid other measures to protect animals and their rights.

An apparent increase in cases of torture, abuse and killing of animals, particularly dogs and cats, has raised public outcry in the country, which has prided itself in the exemplary treatment of stray animals for centuries.

The parliamentary committee, which was set up last year, discusses measures to better protect animals and prevent future cases of torture and killings. Speaking to Anadolu Agency (AA) about the committee's work, Yel said the public's expectation for the welfare of animals was high, and they were striving to respond to it. He said they were both looking into improving current regulations on animal rights and creating new regulations to present a draft text on the issue to the Parliament's presidency.

Currently, archaic laws define animals as commodities and any crime against them is punished with fines. Yel says this should be changed so that crimes can be punishable with prison terms. The committee will suggest at least three years in prison for such crimes. It will also propose including classes on animal rights in the grade school curriculum.

"Municipalities apparently failed in handling cases regarding animals better. There are loopholes on how to intervene in crimes against animals. We will ask for the formation of animal police for the rapid response to crimes against animals," Yel said. "We are believers of a faith whose prophet changed the route of the army so as not to trample on a dog nursing her cubs. We have to be careful about animal rights in a way fitting our history and culture," Yel says.

The committee will wrap up a report on the issue by October after holding talks with everyone involved in animal rights from the government to activists, universities to pet shop owners as well as those who were mauled by animal attacks.

Yel said the number of stray animals appeared to be problematic, pointing out the birth of about 500,000 stray animals every year and the sterilization process only for 200,000 animals yearly. He said this disproportionate population aggravated problems of shelters overwhelmed with stray animals. "There is an uncontrolled increase in the population of stray animals, and one common view is not to confine them to shelters and provide only temporary accommodation for them there. The committee agrees with this. Stray animals should be rehabilitated in the shelters before they are released back to the streets," he said.

Shelters for their part struggle with a string of problems. Yel says only 234 municipalities run shelters for animals out of 1,398 municipalities, and they were understaffed. "One solution can be having volunteers at shelters. The government may also boost funding for rehabilitation and sterilization work at shelters," Yel stated. The government provided TL 31 million of support to local authorities across Turkey for the care of street animals between 2009 and 2018.

A number of incidents emerged in recent years that tarnished Turkey's image as a haven for stray animals, which can be seen freely roaming the cities, huddling together in shops to keep themselves warm in winter. The mass poisoning of animals in Ankara and the discovery of carcasses of dogs and cats in landfills after they were apparently slaughtered in other cities triggered outrage on social media. The incidents were apparently attempts to curb the number of stray animals, while online posts over a string of dog attacks reportedly aggravated attacks targeting animals.