New York turned red and white this weekend as thousands of Turkish citizens flocked to the center of the city for the Turkish Day event organized by the Turkish Consulate General.

The two-day celebration, put on with the support of Turkish entrepreneurs and businesspeople across the country, kicked off on Saturday with a traditional performance by the Turkish Armed Forces' Ottoman Military Band, known as "Mehter" in Turkish, in Times Square. 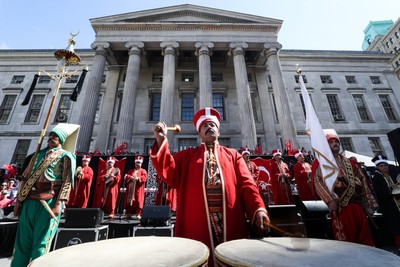 On Sunday, Turkish singer Mustafa Sandal and musician Selim Bölükbaşı performed a concert in front of Brooklyn City Hall. The gathering began with playing of the Turkish and American national anthems and was followed by speeches by officials in attendance before Sandal took the stage.

"It's our flag that unites us together," Minister Gül said at the event. "We will always be one and together."

Gül said Turkey will continue to struggle "decisively" against all terrorist organizations and expand human rights, democracy and freedom.

Ambassador Kılıç encouraged Turkish citizens living in the U.S. to continue to pursue unity and solidarity as Ankara and Washington work to overcome the tensions in their relations.